News of Biden's election victory has been met with both elation and dismay in Egypt. Pro-democracy activists are hoping a Biden presidency would ease the repression in Egypt while government supporters fear Biden will push for inclusion of the Muslim Brotherhood. 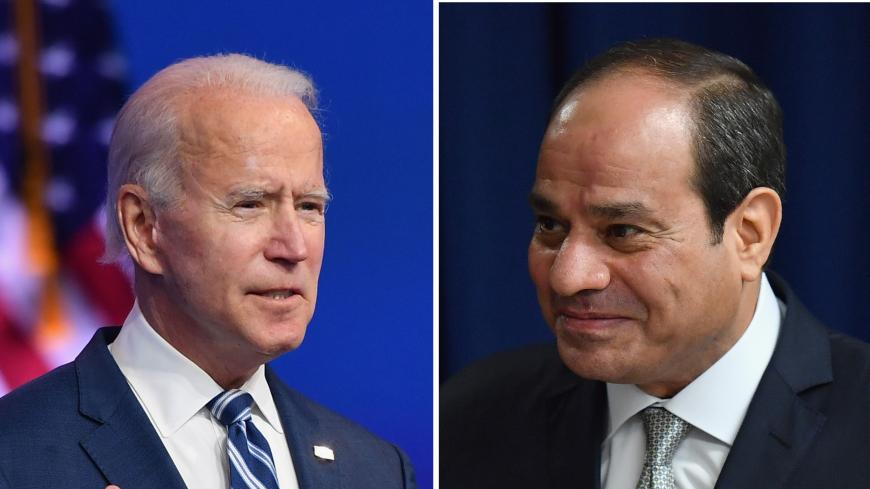 News of Democratic nominee Joe Biden's projected win over Donald Trump in the US presidential election drew mixed reactions in Egypt. While Egyptian President Abdel Fattah al-Sisi was quick to congratulate the president elect Saturday, the situation throughout the country is more complex.

Pro-democracy activists, clearly euphoric and relieved, celebrated Biden's election victory while government supporters expressed their dismay, reiterating Trump's baseless claims of vote fraud. Many Egyptians (from both camps) had closely followed the US election on social media or on satellite TV in the belief that its outcome could determine their own fate.

When the news broke Nov. 7 that Biden had won, Egyptian social media platforms erupted in cheers; many activists are hoping that a Biden presidency will spell an easing of the repression Egyptians have endured over the last several years. Amr Magdi, a Human Rights Watch researcher, suggested that the release of more than 400 political prisoners in Egypt in recent days may possibly have been linked to the change in US administration

"Finally some oxygen!" tweeted Gamal Eid, a rights advocate and founder/chairperson of the Arab Network for Human Rights Information who was clearly relieved to see the end of the Trump era. The outgoing US president had largely turned a blind eye to human rights violations in Egypt and the Middle East region and had even jokingly described Sisi as "my favorite dictator."

"Into the dustbin of history" was an indignant tweet posted by rights activist and former TV presenter Gameela Ismail — an apparent rebuke to Trump. Other opposition members such as former politician Ayman Nour, who currently lives in self-imposed exile outside the country, warned via his Twitter account of "an extremely difficult period ahead" for Sisi when Biden enters the Oval Office come Jan. 20. His comment was in apparent reference to the likelihood of Biden holding the Egyptian leadership accountable for alleged human rights violations.

Government supporters, including many of Egypt's Coptic Christians (who fear a return of Muslim Brotherhood rule in Egypt), meanwhile held on to the hope that Trump would refuse to concede defeat and would remain in office for a second term. They expressed concern that Biden, who some falsely accuse of being a Muslim Brotherhood supporter, would embolden the outlawed Islamic group, allowing its members to make a political comeback in Egypt.

That view has been reinforced by a seemingly orchestrated media campaign demonizing US Democrats and warning that a Biden administration would spell "catastrophe for Egypt." One commentator has described Biden as Obama's puppet and Clinton's "spare tire," a suggestion perhaps that Egyptians should be wary of US meddling in Egypt's internal affairs as many believe happened during the Obama era. Expectations are rife in Egypt that Biden, who was vice president during the Obama administration, would put human rights back on the US foreign policy agenda, advocating inclusive policies that some Egyptians fear may serve Muslim Brotherhood interests.

Cartoonist Adel Gerges published a cartoon on his official Facebook page depicting a bearded Biden in Salafi-style gear and with the four-finger Rabia hand gesture printed on his car. The hand sign is an expression of solidarity with the hundreds killed or wounded by security forces during the August 2013 dispersal of a sit-in staged by supporters of ousted Muslim Brotherhood President Mohammed Morsi.

Above the drawing is a caption that reads: "After riding a Muslim Brotherhood car that got him to the White House, will Biden burn the car and get rid of the Muslim Brotherhood?" The comments below the published cartoon indicate fear among some Egyptians of Biden pushing for inclusion of the Islamic opposition group, designated as a terrorist organization by Egypt in 2013.

But Hassan Nafaa, a professor of political science at Cairo University, rebuffed the widespread conspiracy theories that the Obama administration had sought to spread chaos in the Middle East and had supported the "terrorist" Muslim Brotherhood.

He told Al-Monitor, "The Obama administration neither supported nor sympathized with the Muslim Brotherhood; it had simply tried to ensure a peaceful transition of power in Egypt following the 2011 uprising that forced Mubarak to step down; as a moderate, organized political force at the time, the Brotherhood had appeared the likely alternative to Mubarak's rule so Obama accepted the idea of Muslim Brotherhood rule, albeit with a pinch of salt."

While Nafaa believes that Biden will not push for reconciliation between the Egyptian leadership and the Brotherhood, he noted that the Islamic group stands to benefit if Biden pressures the authorities to improve the country's dismal human rights record. "The Muslim Brotherhood is the worst — but by no means the only — group affected by the ongoing rights violations. Unlike Trump, Biden is likely to push for an end to the arrests and detentions of government critics and opponents, often on trumped-up charges, and to ensure that Egypt's tens of thousands of political detainees get due process," Nafaa said. He added, "It is uncertain, however, whether Biden will resort to slashing military aid to Egypt or other means to pressure the Egyptian leadership to comply with US demands. What is clear is that the next US administration will, like its predecessors, prioritize America's interests."

In an episode of his show "Al Hekaya" on the Saudi-owned MBC Masr channel, TV talk show host Amr Adeeb sought to allay skeptics' concerns, telling viewers there will be no return of the Muslim Brotherhood.

"Egypt is not a banana republic," he shouted. "I want to remind you that in 2013, the US president was Barack Obama and it was he who allowed the Muslim Brotherhood to come to power in 2012 but the will of the Egyptian people and the current administration won. Egypt in 2020 is not the Egypt of 2013; it is far stronger today."

Speaking by telephone to MBC Masr, Amr Moussa, a former politician and former Arab League secretary-general, said that what happened in the region under the rubric of creating a New Middle East and the Arab Spring cannot be forgotten as it led to the destabilization of Egypt and the region.

"Those are issues that must be raised in talks with the next US leadership; we must talk about stability, bilateral relations and ways of overcoming the challenges facing our region but we must also not reject any talk of human rights: We have the laws in place that protect human rights and we have our constitution; we must pledge to respect and adhere by them. But we must also point out the obstacles that stand in our way such as the threats facing us and the fear for our country and stability, ... We need to make it clear that we cannot gamble with our stability nor make light of the terrorist threat," he said.

Mostafa El Fekki, a former politician and diplomat and current director of the Alexandria Library, told Al-Monitor that the United States has in the past adopted a double standard approach vis a vis Egypt and the region, "but Egypt is now strong economically and militarily and can deal with the US on an equal footing."

He added that one of the reasons some Egyptians favor Trump over Biden is because they believe Trump backed Egypt in the Great Renaissance Dam dispute with Ethiopia. "We hope that Biden will do more than pay lip service to Egypt getting its rightful share of Nile water and help in resolving the longstanding crisis with Addis Ababa."

Egypt, Sudan and Ethiopia have failed to make headway in talks between them on the filling of the Ethiopian dam despite mediation efforts by the United States. Egypt, which faces a severe water shortage, fears the filling of the dam will cut into its water supplies. Trump's recent warning to Ethiopia that Egypt could bomb the dam, has, not surprisingly, ruffled feathers of Ethiopian Prime Minister Abiy Ahmed, who rejected the threat and accused the United States of siding with Egypt in the dispute.

Samir Farag, a senior army officer and military strategist, downplayed the Egyptian leadership's concerns about a Biden presidency. He said US policies "are about institutions, not individuals."

"Regardless of whether the US president is a Republican or a Democrat, he won't be the one calling the shots. The major decisions are made by Congress, the Pentagon and other US institutions," he told Al-Monitor.

"The United States is aware of the progress made by Egypt under Sisi's leadership and recognize Egypt's importance and strategic role in the region, particularly in leading the fight against terrorism; Biden will seek to further strengthen US Egyptian ties, which are based on partnership and mutual respect," he said.