Saudi Arabia, Egypt go in on media project ahead of COP27

Preparations are underway in Egypt to launch an international news channel after securing an agreement with Saudi Arabia to fund the media project. 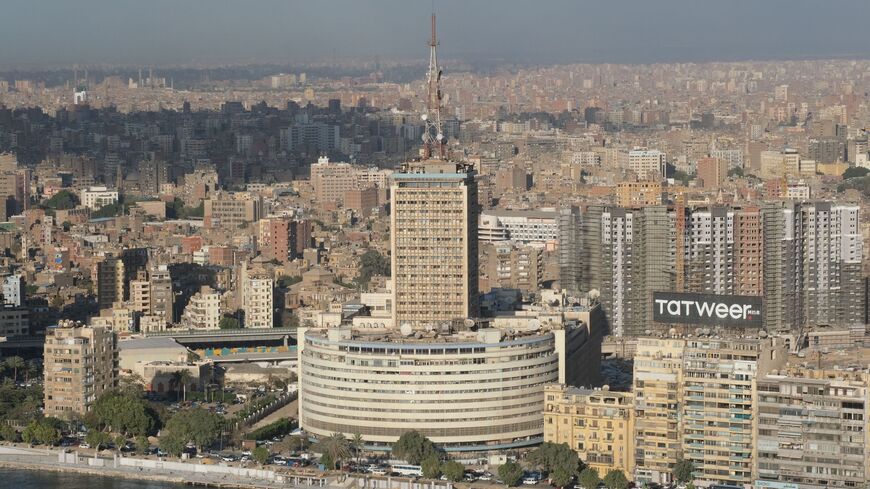 This picture taken on Jan. 13, 2022, shows a view of the broadcasting headquarters of the Egyptian Radio and Television Union in the center of Cairo. - Photo by AMIR MAKAR/AFP via Getty Images

After repeated delays over the lack of funds, Egypt recently announced the November 2022 launch of its own international news channel amid reports of an Egyptian-Saudi partnership to cooperate in the media and drama sectors.

On July 7, Egypt's United Media Services announced the upcoming launch of an international news channel and a regional news channel focusing on Arab affairs in conjunction with the United Nations Climate Change Conference 2022 (COP27), which Egypt will host in Sharm el-Sheikh in November.

United Media Services is an intelligence-owned production company that owns several local newspapers and channels, including Al-Hayat. Reuters reported back in 2019 that the company is affiliated with the Egyptian state and that members of its board were previously linked to the country’s General Intelligence Service.

The announcement raised questions on the channels’ funding sources, particularly since the government failed to launch it earlier due to a funding crisis. In May, Mada Masr newspaper quoted a source at United Media Services as saying that the project to launch an international and regional news channel was suspended due to funding reasons.

However, the project seems to be back on track after reports of securing Saudi support and funding. On July 12, Mada Masr quoted sources from United Media Services as saying, “An Egyptian-Saudi partnership agreement is the reason for the financing breakthrough, which resulted in the company announcing that it will launch Egyptian international and regional news channels.”

The sources added, “The Saudi funding has helped resume the work to set up the channels after Saudi Crown Prince Mohammed bin Salman visited Cairo on June 20. The agreement stipulated the participation of the Egyptian side, represented by United Media Services, in running the news channel along with a team from the Saudi Research and Media Group, which owns several regional news platforms.”

Commenting on the launch date and citing its sources, Mada Masr said, “The Saudi-Egyptian agreement stressed the need to launch the channel in conjunction with the COP27 so as to highlight the Egyptian efforts during the event, which the Egyptian regime sees as an opportunity to ease the economic situation.”

However, the media project failed more than once despite Egyptian attempts to secure Gulf support. In 2021, United Media Services signed memoranda of understanding and cooperation agreements with Saudi MBC channels.

Back then, on May 28, 2021, Egyptian media professional and TV talk show host Amr Adib said on MBC channel that “there will be official joint cooperation between the Egyptian and Saudi media bodies.”

Nevertheless, the cooperation agreements with Saudi Arabia did not result in an agreement to launch an international Egyptian news channel or any media projects.

However, the Saudi crown prince’s visit to Cairo on June 20 played a pivotal role in reviving the project. Mohammed was accompanied by Saudi Media Minister Majid al-Qasabi, who signed the media cooperation protocol along with Karam Gabr, head of Egypt’s National Press Authority. The Egyptian-Saudi media protocol includes joint media projects employing workers from both countries.

Following the signing ceremony, Qasabi told the press on June 21, “The protocol aims to keep ongoing communication between the media sectors in Egypt and Saudi Arabia to be up to the level of good relations between the two countries’ leaders.”

Gabr said, “The media cooperation protocol between Egypt and Saudi Arabia came after three-hour meetings between 25 Saudi officials and their counterparts in the Egyptian media sector.” Gabr stressed that “the Egyptian and Saudi media possess huge media influence in the region.”

The sources added, “United Media Services decided to rely on 200 graduates from the Presidential Program for Youth Leadership, which is under the supervision of Sisi and the General Intelligence Service, to operate the new news channels after they were trained by specialists — although they still do not have journalism and media experience.”

In this context, Hassan Nafaa, professor of political science at Cairo University, told Al-Monitor, “The Egyptian international news channel project is [not taking into consideration] the economic conditions facing the country. It is also difficult for the channel to succeed in light of the shrinking space for media freedoms.”

Nafaa added, “The Egyptian news channel will be facing crises, namely the diverging positions between Egypt and Saudi Arabia on many issues. The biggest challenge is to identify who has the upper hand in managing the channel.”

He noted that its success requires employing a professional staff and the provision of a wide space for freedom to express opinions and counter-opinions so as to convince the non-Egyptian citizens of the content.