Egypt is seeking to restore its media influence in the Middle East and Africa. 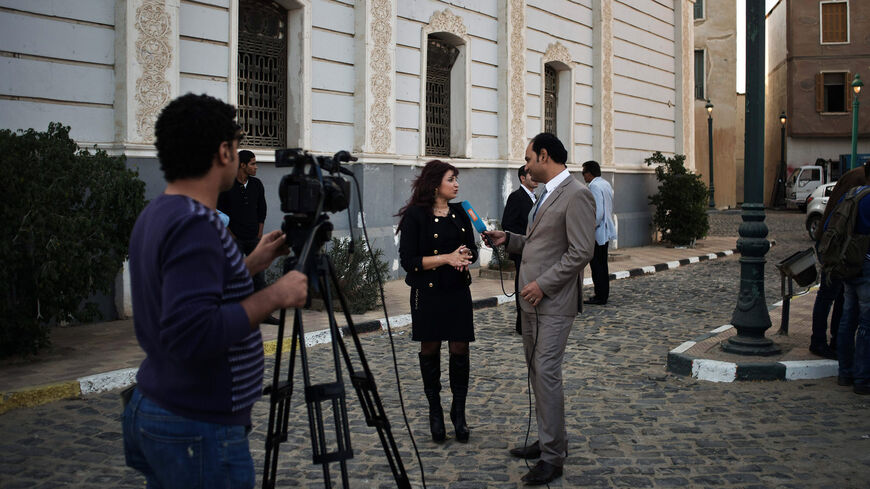 An Egyptian actress gives an interview to a local TV channel before the start of a shooting on the set of "Murafaa" soap opera, Media City, Cairo, Egypt, Nov. 28, 2013. - Gianluigi Guercia/AFP via Getty Images

CAIRO — Egypt's United Media Services, an intelligence-owned production company that owns several local newspapers and channels, announced July 6 the launch of the United News Sector, considered one of the largest news groups in the Middle East.

The company continued that the EXTRA News channel, which was launched in 2016, will undergo a comprehensive development, building on the successes it achieved in the past period. It also announced the launch of Extra al-Hadath channel.

The United Media Services’ announcement was widely and positively welcomed among political and media circles.

In a phone interview on “Massa DMC” hosted by Ramy Radwan on the Egyptian DMC TV channel July 7, Hassan Abdullah, chairman of the board of directors of United Media Services, said that the company had announced more than a year ago its plan to establish a news group that includes four channels, including two local channels, one regional and one international.

He noted that the recent announcement has set the date for the launch of these channels, coinciding with the COP27 scheduled at the end of the year.

“We will not find a better date than this one, because it [the climate summit] will be a global event held on Egyptian soil with a high level of attendance. Everything will be ready on time,” he continued.

Egypt is racing against time to finalize preparations for the COP27, as Cairo seeks to present itself as a voice for African and developing countries on climate issues before the representatives of advanced countries that will be attending the major event.

A well-informed source working with United Media Services told Al-Monitor on condition of anonymity that the international channel that the company plans to launch will be called Cairo News.

The source said that work is currently underway at the Egyptian Media Production City headquarters near Cairo to prepare the studios for the new channel and select the work teams ahead of the launch of the other local and regional channels.

Egyptian political author Abdullah al-Sanawi told Al-Monitor that launching a global news channel is an important step that materializes an old plan that has been on the table since the days of President Hosni Mubarak.

The move aims to give Egypt a media platform addressed to global audiences, similar to other Arab channels like the Qatari Al Jazeera channel and Saudi Arabia’s Al-Arabiya, he added.

Egypt has always had a reputation as a leading country in the production of media content, which is the main reason why the Egyptian dialect is widely understood across the Arab world.

Previous Egyptian rulers also used the media as soft power to serve their political agenda in the region and spread their messages, including late President Gamal Abdel Nasser, who delivered his nationalist socialist messages across the Arab world through radio stations, such as Voice of the Arabs (Sawt al-Arab) and Middle East Radio (Al-Sharq al-Awsat).

However, Egypt has not had any international news channel targeting non-Arabic speakers so far, unlike Gulf countries, which own several international channels such as Al Jazeera, Al-Arabiya and Sky News Arabia, whose influence reached the Egyptian depth and managed to pull the rug out from under the Egyptian channels’ feet covering Egyptian-related news.

In 2017, Egyptian President Abdel Fattah al-Sisi pledged to launch a major Egyptian international news channel, but it has not seen the light since then.

However, United Media Services, which is owned by Eagle Capital, adopted the idea and announced last year its plan to launch a regional news channel.

In 2016, Eagle Capital, a state-owned investment fund firm, acquired several media entities in Egypt, including newspapers, TV channels and production companies, such as ON, Al-Hayat, DMC, Extra News and CBC, and private newspapers including Youm7, Dostor and Al-Watan. All these media outlets have been gathered under the United Media Services umbrella, thus controlling the media scene in Egypt and forming a powerful media arm for the Sisi regime.

The head of the news channels department at United Media Services, Ahmed al-Tahiri, told Nagham FM radio station July 6 that there is a directive that the company establishes a news group that will be one of the largest news groups in the Middle East, to keep pace with Egypt’s regional and international standing.

He noted, “Egypt is an influential country in global decision-making, particularly since it has been playing a significant role under President Sisi’s wise political leadership of the country.”

Tahiri said, “The time when Egyptians follow news broadcast to the liking of non-Egyptian news channels is over. It is time for Egyptians to own their own news channel with a presence in all world capitals in order to convey Egypt’s vision and point of view."

He added, “We have studied our steps well … and it is time to take them."

Sami Abdel Aziz, professor of mass communications at Cairo University, told Al-Monitor that the launch of an international news channel achieves several aims. First, it will protect Egypt from countermedia, and will promote the current political situation in the country.

Second, Abdel Aziz continued, it also represents an important step for Egypt to restore its regional influence in the media, especially in Africa, so as to protect its interests and support its position in the Grand Ethiopian Renaissance Dam (GERD) file.

Ethiopia is getting ready for the third filling of the GERD reservoir, while negotiations between Egypt, Sudan and Ethiopia are frozen.

Since Sisi took office in Egypt in 2014, Egypt has sought to restore ties with African countries as part of efforts to restore its image, protect its own interests and strengthen its position in the GERD issue.

Abdel Aziz added, “The majority of Arabic-language news channels built their reputation and audience on the content they convey from Egypt. An analysis of the content of most of these channels indicates that at least 30% to 50% of their content is Egyptian, as Cairo is an important and influential player in the surrounding region.”

He noted that the success of news channels depends on professionalism in covering events, not on serving as mouthpieces that would lose credibility.

Sanawi said, “The international channel’s success requires an appropriate media environment, including freedom, an open public space and noninterference of any security apparatus in the content.”

Since coming to power in 2014, Sisi has repeatedly clashed with the media on numerous occasions, before managing a few years later to impose his control and form a media aligned with his policy.

But the situation has changed somewhat over the past few months, after Sisi launched a national political dialogue with the opposition and released dozens of activists. The Egyptian channels started hosting opposition figures and addressing issues critical of the government’s performance.

Sanawi concluded, "There is a relative openness available to the media, but it is the least we aspire to, and it is not sufficient to make a project like the international channel a success.”