The increasing pressure, violence and prosecution faced by journalists at the hands of security forces represent a major threat to the future of press freedom in the country. 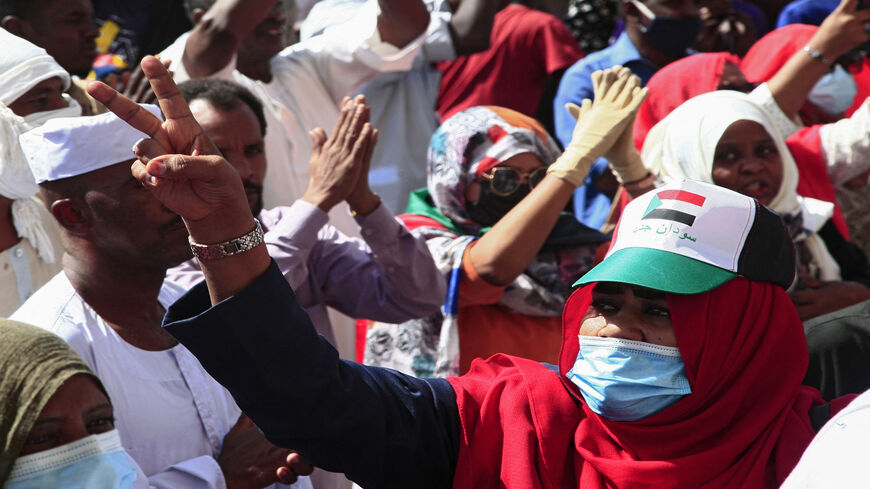 A Sudanese demonstrator flashes the victory sign during a rally in al-Daim neighborhood, Khartoum, Jan. 2, 2022. - -/AFP via Getty Images

The Qatari media network Al Jazeera announced in a Jan. 16 statement that the Sudanese Ministry of Culture and Information had withdrawn the broadcast license of its channel Al Jazeera Live and revoked the accreditations of two of its journalists in Sudan for their allegedly “unprofessional” coverage of the country’s affairs. The ministry later stated, in a statement carried by the state news agency SUNA, that the decision didn’t affect other satellite channels of the group, and that it came after several warnings.

A few days earlier, on Jan. 12, the Sudanese Journalists Network (SJN), a local press freedom group, condemned the arrest of two photographers — Mohamed Khidir and Magdi Abdalah — who work with the Chinese news agency Xinhua. Both were forcibly taken to a military zone in Omdurman, the twin city of Khartoum, handcuffed in an isolated place and subjected to hours of interrogation after having their phones confiscated, the group stated.

Barely two weeks before, on Dec. 30, a group of soldiers had violently stormed the offices of Al-Arabiya and Al-Hadath TV channels in Khartoum, fired tear gas, assaulted those present and confiscated part of their equipment, according to videos of the incident and details released by both channels. The Sudanese authorities also stormed the office of Al-Sharq TV and interrupted a live broadcast of their journalist Sali Osman, footage showed.

The three incidents reveal the increasing pressure, violence and prosecution faced by the media and journalists in Sudan at the hands of security forces following the Oct. 25 coup, including threats, physical violence, arrests, summons, raids and looting, and destruction of equipment, groups such as the SJN warn. The crackdown, which takes place especially on days of protest against the military government and which seems to be intensifying in recent weeks, represents a serious setback to the hard-won progress made during the now disrupted transition on press freedom and threatens to turn Sudan into a media blackspot.

“The current coup authority is a natural outgrowth of the former regime, which had a big battle with the Sudanese people, but had a more private battle with the press and media,” Khaled Massa, journalist, political analyst and SJN member, told Al-Monitor, referring to the regime of former dictator Omar al-Bashir, deposed in April 2019.

“The basic idea is to domesticate and dismantle all centers of power in Sudanese society, such as professional and political centers,” Massa said. “Certainly some of the attempts to dismantle [these centers of power] are directed toward journalists and the media. They thought of dismantling the media as a center of power of the revolution; that was one of the goals of the coup.”

In the early hours of Oct. 25, amid the first reports of the military’s movements, Sudan’s Ministry of Culture and Information stated on Facebook that military forces had stormed the headquarters of public television and radio in Omdurman. Three days later, Sudanese state TV reported that the coup leader, Abdel Fattah al-Burhan, had sacked the country’s radio and television director, Luqman Ahmed, and the director of the state news agency SUNA, Mohamed Abdel Hamid Rahman. Part of SUNA’s staff was fired as well, and security forces shut a number of other radio stations, according to African Arguments. Internet service in the country has been also severely disrupted since the morning of Oct. 25.

“Coercion and the issues associated with it can only be practiced in our days in the dark, fearing that their exposure and reactions from the local and international communities will lead to the disruption of the coup camp. And this requires the absence of free media,” said Shamseldin Dawelbeit, editor-in-chief of El Hadatha newspaper, which announced Jan. 15 the decision to suspend publication in protest of the coup.

“The coup began by cutting off the internet and communications, then controlling Sudan TV, sending messages accompanied by threats to other Sudanese TV channels not to criticize the coup and to open their doors to commentators identified by the coup,” he told Al-Monitor. “In other words, controlling or taming the local media, as they used to do in the past.”

Building on this initial assault, press freedom has eroded and violence against journalists has intensified even further in recent weeks, with some in the country pointing out that the deterioration coincides with the feared comeback of the General Intelligence Service following an emergency decree restoring part of its powers issued in December.

Already on Dec. 19, the SJN documented the highest rate of violations against journalists and media professionals it had registered in a single day since the military coup, including the arrest of a journalist who was released the following morning, and assaults on three others who were beaten. Another three journalists lost consciousness after inhaling tear gas, and two others were injured, the group said in a statement. On Dec. 30, the day of the raid on the offices of Al-Arabiya, Al-Hadath and Al-Sharq TV channels, two journalists were arrested.

On Jan. 4, security forces threw tear gas canisters to media professionals of Al-Araby TV while they were filming protests from their office in Khartoum, located in a building hosting several satellite channels, and blocked the place for hours, the SJN reported.

During another round of popular mobilizations, on Jan. 13, security forces ran over two media professionals — Othman Fadlallah and Bakri Khalifa — an act the SJN denounced, and beat journalist Shamail El Nour, according to a Facebook post. Security forces also stormed the office of Al-Araby TV, arrested four of its workers — Islam Saleh, Wael Al Hassan, Mazen Onur and Abu Bakr Ali — and took them to an unknown location, the channel reported in an article. In a tweet later that day, Al-Araby TV confirmed that Sudanese authorities had released the whole group.

“Over the past week, Sudan’s military leaders have made their contempt for press freedom clear,” said Justin Shilad, a senior Middle East and North Africa researcher at the Committee to Protect Journalists. He told Al-Monitor, “The startling violations that we have documented include arrests, assaults and attempts to run over journalists. These have a very specific purpose: to silence the press and prevent the world from witnessing an increasingly brutal crackdown on the pro-democracy movement.”

He added, “The basic freedoms and human rights of the Sudanese people are on the line. As the international community pushes for discussions to resume between the military and the pro-democracy movement, the United Nations, the United States and all other governments and institutions involved must state clearly to Sudan’s military rulers that press freedom, and other basic human rights, are not up for negotiation."