Iraq clamps down on media and broadcast networks covering protests

In order to reduce coverage of the protests in Iraq, the government has shut down several TV channels and warned others. 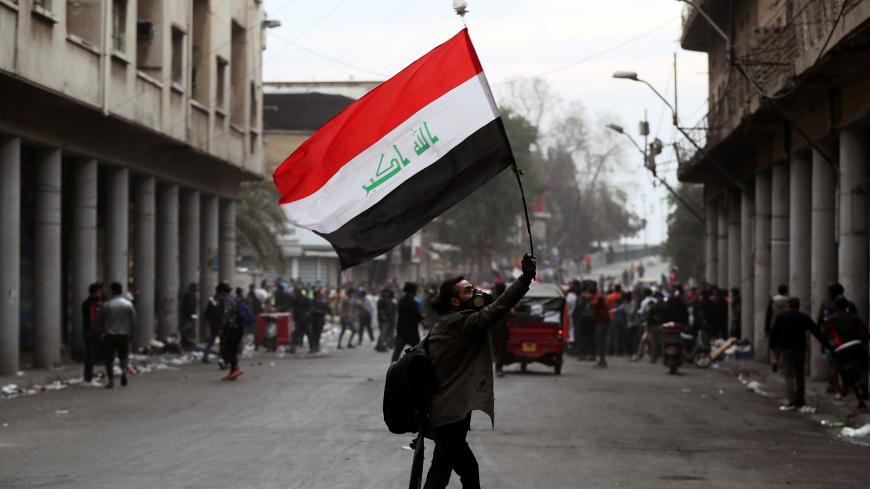 For the first time, the Iraqi National Communications and Media Commission shut down or gave warnings to 17 media institutions for covering the protests in Iraq. The offices of Al-Arabiya, Al-Hadath, Dijlah TV, Al-Rasheed TV, NRT, Al-Sharqiya TV, Al-Fallujah TV, Houna Baghdad and Al-Hurra were closed, while Al-Sumariya, Asia Network Television, Rudaw Media Network, Sky News Arabia and Ur Television were warned to change how they cover the demonstrations.

On Nov. 17, a mortar shell hit Iraq Art Co. in Karrada in the center of Baghdad. Security information reported that the shell was launched east of the canal in the capital. This is where most of the shells that are fired toward the Green Zone are launched, indicating the involvement of Iran-backed groups.

Iraq Art Co. is a local production business that offers television services to several satellite channels such as the BBC, Al-Araby TV (owned by the Palestinian politician Azmi Bechara) and other channels. Al-Araby Al-Jadeed, which is affiliated with Al-Araby TV, said, “The missile was targeting the Al-Araby TV office in Baghdad.”

On Nov. 8 and 15, two episodes of the news satire Al-Basheer Show were jammed, as soon as the broadcast began on the German DW channel. Jamming would start at 9 p.m. while the episodes were being shown, and would end an hour later at 10 p.m., when the show was over.

Ahmed al-Basheer, who presents the show, told Al-Monitor, “The last episodes of my show were deliberately jammed because I spoke about the Iraqi protests and revealed the phoniness of those who want to distort the image and reputation of protesters and accuse them falsely.”

He said, “I believe this is a crackdown on freedom of expression in an attempt to silence people and muffle the voices of opposition criticizing government practices in dealing with protesters.”

The government clampdown on the media and journalists has taken several forms, ranging from obscure threats to the shutdown of media institutions to jamming channels or not offering security protection. There were also insinuations that media channels have been inciting people to protest.

On Nov. 8, a group of Iraqi protesters complained about the clampdown against them for having taken photos of the protests. A local journalist told Human Rights Watch in November, “Soldiers surrounded me while I was filming, and they arrested me and accused me of inciting people to protest. They told me they would keep arresting journalists.”

An engineer at an Iraqi broadcast company told Al-Monitor, “The company that broadcasts for the Saudi Arabian Al-Arabiya and Al-Hadath channels, among others, had to change its office after an armed force raided it Oct. 5. The office was closed for a few days, and I took shelter in a place in the capital where security control was tight.”

A journalist who works at a non-local organization told Al-Monitor he received a letter Nov. 21 that included threats from unknown people asking him to stop media coverage for the organization where he works.

The journalist told Al-Monitor on condition of anonymity, “I received a text message on my personal phone threatening to kill me and attack my family if I continue to use my phone to contact the channel where I work.”

He added, “Since the outbreak of the protests Oct. 1, we have been under pressure and oral threats that are either transmitted to us through colleagues in the form of advice or through intimidation and threats of danger and death at the hands of the authorities. They had a problem with our live coverage of protests and our presence in the squares among protesters.”

The internet ban was among the Iraqi government’s clampdown methods on the media.

The Iraqi Media House, a civil society organization in Iraq, reported that “as a result of the internet ban, 90% of Iraqi media coverage was cut off, and 70% of social media coverage was dead. Fears of targeting media channels and journalists also reduced coverage.”

Director of the Journalist Freedoms Observatory Ziad al-Ojaily told Al-Monitor, “Threats to journalists, whether implicit or explicit, continue. Security forces are arresting many photographers and field correspondents as soon as they leave the protest squares, but they are afraid of voicing these arrests, as security is threatening to catch them again if they talk about what happened to them on the media.”

He added, “The first message behind the attack on media institutions in Baghdad in early October was impactful and clear. Other journalists and institutions are afraid of the recurrence of this scenario, which has stuck in their heads.”

Local organizations concerned about freedom of the press are finding violations and abuses against journalists and the media during the protests.

The Press Freedom Advocacy Association in Iraq reported that there had been “89 violations against journalists," 33 death threats and the shutdown of or warnings to 17 offices and headquarters of media institutions.

On Oct. 7, unknown armed men abducted journalist Hussein Al-Amel from his house in Dhi Qar in southern Iraq. A few days earlier, Nas News moved its premises from Baghdad to Sulaimaniyah following threats from unknown men for covering the protests. The American Al-Hurra channel followed suit, as most of its staff left Baghdad for Erbil to resume work.

Threats and the clampdown on journalists and the media in Baghdad continue. Iraqi authorities are intensifying efforts to reduce media coverage of the protests and to ban the broadcast of reports talking about human rights violations, especially those documenting the number of casualties and fatalities, which the government always denies.