In the wake of protests, civil society activists and journalists are leaving Baghdad after hearing the Iraqi government is preparing to arrest them. 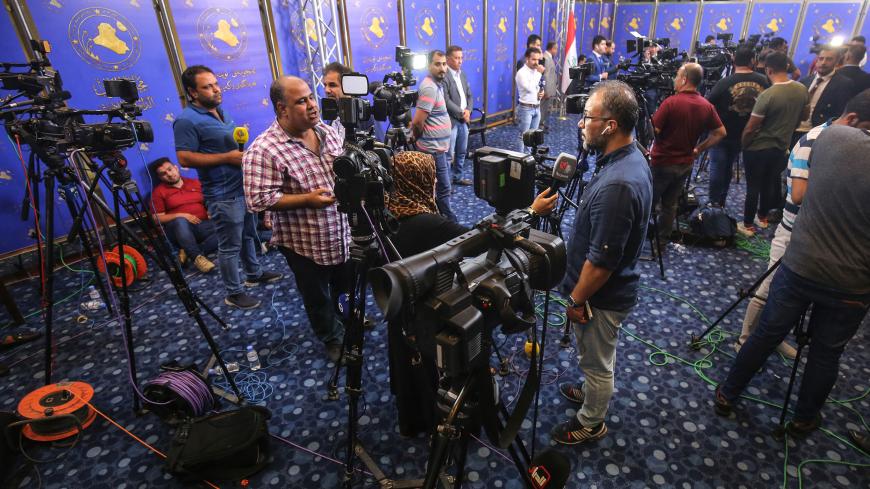 On Oct. 9, an Iraqi journalist left Baghdad for Erbil, the capital of the Kurdistan Region of Iraq, after hearing that his name was on a list prepared by the Iraqi government for the arrest of journalists and civil society activists.

“I had to travel to Erbil until things calm down,” the journalist, who appeared on satellite television, told Al-Monitor on condition of anonymity for security reasons. “The government is launching a tight crackdown and arresting anyone who wrote, supported and spoke about the protests.”

He continued, “In Erbil also, the authorities arrest dissidents who criticize them or talk about corruption and freedoms, but this is a temporary stop for those like me who escaped the danger in Baghdad.”

According to Reporters Without Borders, Iraq ranks 156 out of 180 countries on the World Press Freedom Index's 2019 list.

According to news currently circulating in the local press, Iraqi authorities are gearing up through the National Security Council — which was previously headed by Faleh al-Fayyad, commander of the Popular Mobilization Units (PMU) — as well as the Popular Mobilization Security Directorate to arrest journalists and activists. Some activists claim they have received information that 130 names are on the list.

A security source who spoke to Al-Monitor on condition of anonymity corroborated the news and added, “The [PMU] had set a list of names of journalists, activists and bloggers to be arrested. The list was set for execution, but the escalating tone of Ayatollah Ali al-Sistani on Oct. 11 pushed them to hold back for a while. Nevertheless, the listed persons remained under surveillance."

The PMU denied the information in a statement released by Fayyad: “We did not prepare any list of journalists, activists or bloggers to be arrested.”

Al-Monitor also learned from the same sources that threats were sent from foreign parties to a number of party leaders and religious authorities in Iraq, including leader of the opposition National Wisdom Movement Ammar al-Hakim. They were warned against supporting the protests.

In this context, a group of civil society activists and supporters of the protests disappeared less than a week after the protests broke out — namely, physician Maytham al-Helou, who is said to have treated the wounded and activists Aqeel al-Tamimi and Falah Hassan.

Ziad al-Ajili, director of the Journalistic Freedoms Observatory, told Al-Monitor, “The raids and attacks on media in Iraq, cutting communications, and threatening and chasing journalists is a dangerous step back toward the collapse of modern democracy.”

A group of prominent journalists who left for Amman, Erbil and Sulaimaniyah told Al-Monitor they would not return to Baghdad unless there were real guarantees for their safety. They believe this requires an official admission by the government of the threats leveled against journalists by its security services.

On Oct. 5, “unidentified” gunmen attacked Saudi-owned channels Al-Arabiya and Al-Arabiya Al-Hadath in the Abu Nawas area of ​​Baghdad, as well as the office of NRT in Arabic, which is owned by former parliament member for Gorran (Movement for Change) Sarwa Abdel-Wahid in the same area.

Hundreds of meters away, the building housing Dijla TV, which is owned by Iraqi al-Hal bloc leader Jamal Al-Karboli, was burned down in the Jadriyah area.

The targeting of these channels was not arbitrary; rather, it was systematic. These media outlets had intensively covered the protests that were sparked Oct. 1. According to reports from correspondents at these outlets, the channels received threats two days before they were attacked, warning them to change their coverage policy of the protests.

Amnesty International's Iraq researcher Razaw Salihy told Al-Monitor, “The Iraqi authorities have failed to create a safe environment for journalists and civil society activists. They ought to practice what they have been always preaching about respecting rights and freedoms. The freedom of expression and the press are protected under Iraqi national laws and Iraq's international commitments.”

This is the first time Iraqi journalists have felt the magnitude of the risks they face. In earlier times, there were individual threats to some of them who left Baghdad or Iraq, but this time there is a semi-mass migration of journalists from Baghdad.

Emptying the capital from an elite Iraqi group of journalists and civil society activists is not in the best interest of the government. This is a dangerous index for the democratic regime in post-2003 Iraq, and it’s a major mistake that would stigmatize Adel Abdul Mahdi's government.

The government, including the PMU, ought to reassure journalists and civil society activists and shield them from intimidation or assaults. Attacks against a group of media institutions and the exodus of prominent media figures and activists from Baghdad are not sending positive messages about Iraq after its liberation from the Islamic State (IS).