The kidnapping of a number of activists and journalists in Baghdad has members of Iraq's civil society worrying about their livelihood. 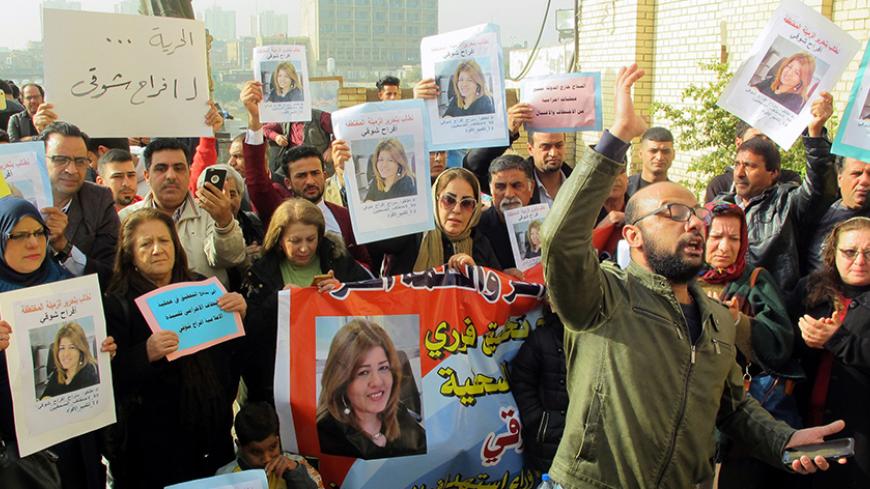 Protesters hold portraits of Iraqi journalist Afrah Shawqi, who was abducted from her home in a southern neighborhood of the Iraqi capital, during a demonstration calling for her release in Baghdad, Dec. 30, 2016. - SABAH ARAR/AFP/Getty Images

BAGHDAD — On May 8, in al-Batawin area in central Baghdad, gunmen stormed into the apartment of civil activists who have been advocating for political reform for two years. The gunmen captured seven activists, mostly students, and took them to an unknown location. The increase of armed groups' attacks on civilians has sparked fear in Iraqi society, and activists are calling on the government to work on releasing their colleagues immediately and to arrest the kidnappers.

The activists were indeed released two days after their abduction, but the perpetrators have yet to be arrested. The Iraqi government and the Ministry of Interior remain silent on the identity of the criminals. Yet the minister of interior announced the release of the kidnapped activists himself, and his media adviser talked about “intensive operations by the minister” to return the kidnapped to their homes. The adviser, however, did not name the perpetrators, saying that they will be identified later on. This has yet to happen.

This incident raised once again concerns about the ease of movement of armed groups in Iraq's cities and questioned the ability of the security forces within residential areas to protect Iraqis.

In another incident, the security forces wrongly arrested five young men in Karbala governorate on charges of “hanging around” — an offense that is not found in the Iraqi law. One of the arrested men was killed in the detention center on May 5, and the victim’s family accused the police of Karbala of torture. The police denied the charges.

Social media users have made a link between the two incidents, accusing the security forces of being unable to capture the true culprits who are terrorizing Iraqi cities, while arresting young men on petty charges such as congregating in small groups.

Kidnapping activists and social workers is not something new in Iraq. In December 2016, journalist Afrah Shawqi was kidnapped for a week and then released. While the Ministry of Interior said it had leads on the culprits, it was unable to identify and capture the kidnappers.

Since September 2015, the whereabouts and fate of activist Jalal al-Shahmani, who was abducted from the Waziriya district in Baghdad, are still unknown. The government and the security forces ignored the Shahmani case.

On May 11, the seven released activists, along with a group of other civil activists, held a press conference, calling upon Prime Minister Haider al-Abadi to “assure the civil community and the Iraqis in general that the government and its security apparatuses are able to protect their people, restrict the loose armed groups and take strict measures to limit the weapons in the hands of the state.”

They also called on the interior minister and the Baghdad Operations Command “to bring the kidnappers to justice, put an end to all armed groups inside the cities and deal with kidnapping crimes as major terrorist crimes.”

Activists also called upon the “president, prime minister, speaker of the parliament and all political forces in the country to denounce the systematic campaign led by extremists to target activists.”

Indeed, activists and journalists feel they are facing a systematic campaign aimed at silencing them and preventing them from calling for reform of the Iraqi situation, which is suffering from security and economic deterioration, and hit by a major political imbalance represented by the sectarian quotas management system in the country’s political institutions.

Ziad al-Ajili, the head of Baghdad's Journalistic Freedoms Observatory, told Al-Monitor, “There are attempts to intimidate journalists in Iraq." He said that kidnappings and the failure to prosecute perpetrators will inevitably lead to intimidation of journalists and make them fear for their lives.

Ajili added, “The Iraqi government has yet to prove its seriousness in pursuing those who harm or intimidate journalists, and this exacerbates the threat to freedom of expression in Iraq."

The reason why activists and key figures are being attacked and who is behind these kidnapping operations or intimidation campaigns remains unclear.

Gharawi said, "Those who carry out these acts are backed by political parties that do not want the truth to be heard. They want to muzzle and silence all those who demand reform of the political process, criticize the government and combat corruption.”

In a confident tone, he added, "Anyone who criticizes these parties, trying to implement corruption projects, is likely to be kidnapped or threatened. Civil movements in particular do not have armored vehicles or armed factions that protect them against threats.

This happened precisely when he denounced the abduction of Shawqi and the seven activists. However, Abadi did not name the parties behind these operations.

Gharawi also pointed out that the Security and Defense Committee did not obtain "any names of those accused of the kidnappings of civilians, although it asked the executive authorities and the security forces about these entities," noting that the committee sought to get these details, but to no avail.

The executive and legislative branches in Iraq are suggesting that political parties are behind the kidnappings and intimidation campaigns, yet they remain silent and this heightens and legitimizes the fear of the civil activists and their concerns over public freedoms in the country.