Kidnappings are on the rise in Libya, with hundreds who have disappeared since the overthrow of Moammar Gadhafi’s regime in 2011, while the UN-backed Government of National Accord does not seem to be offering much help. 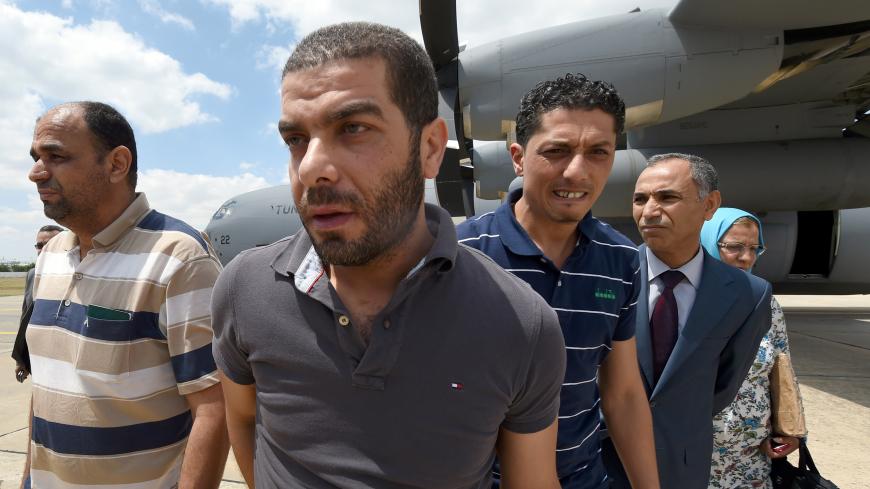 Tunisian officials who had been kidnapped by an armed militia at the Tunisian Consulate in Tripoli, Libya, arrive at Aouina military airport in Tunis, Tunisia, June 19, 2015. - FETHI BELAID/AFP/Getty Images

The last time Arwa el-Shershary saw her three children — Dahab, Abd and Mohammad — was on Sept. 2, 2015. They were on their way to school when armed men stopped their vehicle in Surman, a city in Libya’s northwest. After shooting the driver five times in the leg, the men abducted her daughter and two sons from the backseat of the car. Dahab was 11 years old, Abd was 8 and Mohammad was 6.

Two days later, a man called the Shershary family to demand a ransom of 20 million Libyan dinars — more than $2 million in the current black market — but they couldn’t afford to pay.

“My father wanted to speak to [his children] over the phone, but the kidnappers wouldn’t let him,” Asawer el-Shershary, the eldest daughter, told Al-Monitor. “The [kidnappers] hung up and never contacted us again.”

For the next two years, the family appealed to the local authorities and tribal elders to search for the children. The gang that kidnapped the children was ostensibly found in Surman on March 15. That day, a militia acted on orders from the UN-backed Government of National Accord (GNA) to go after the kidnappers. A shootout ensued, killing four of the five gang members and sending the lone survivor into a coma. If he doesn’t wake up, the family may never find their children, as they are relying on the man to disclose where the children are.

Gangs and militias have abducted hundreds of people following the overthrow of Moammar Gadhafi’s regime in 2011. And while the total figure of missing persons is unknown, rights groups believe that the number has soared since 2014. That year the economy collapsed as the country spiraled into civil war, fueling a business of kidnapping for ransom. Others are frequently snatched for political or ideological reasons.

Despite the rampant abductions, activists say that Libya’s competing authorities have little power and incentive to stop the kidnappings.

Ahmed al-Sherkse, the founder of Allebya for Democracy and Human Rights (ADHR), a civil society group that was established in February to advocate on behalf of families of those abducted, said that his group is lobbying the GNA to investigate the whereabouts of the missing persons.

“We need the government to halt this phenomenon because it is destroying all aspects of civilian life in Libya,” he told Al-Monitor.

The ADHR is creating a database to keep track of the missing. While only 60 people have been counted so far, new names are added almost daily. The most recent abducted person on the list is Abdul Matloub Sarhani, who disappeared in August 2017. His family told ADHR that they suspect that Sarhani was snatched because he is a Sufi, a follower of the sect of Islam that jihadis and hard-line Salafists deem heretical.

Malik al-Faissi, who was last seen in the town of Msallata on Jan. 27, 2012, may have suffered the same fate. A devout Sufi and student of religion, Faissi was only 22 years old when he disappeared. He was known to be at odds with the intolerant views and practices of some Salafists in the town, and most notably, he spoke out against Salafist hard-liners who were desecrating Sufi sites and graves. Msallata residents suspect that Faissi was abducted by religious fundamentalists.

Idris al-Faissi, who is Malik’s father, told Al-Monitor that no one contacted him to demand a ransom since his son disappeared, and he emphasized that he was forced to search for his son by himself until he got in touch with the ADHR in March.

“For the last six years, I have gone to the Libyan authorities to ask for help to get information about my son, but nobody did anything,” Faissi said.

More people have disappeared amid continued inaction. In Tripoli, 189 people were abducted in March 2017, while 68 people were kidnapped in April, according to records obtained by the Interior Ministry of the GNA.

Worse still, the GNA has not established a committee to investigate the fate of the disappeared, which it was supposed to do by February 2016, according to Article 26 of the Libyan Political Agreement (LPA). Sami Shams, an activist with the ADHR, told Al-Monitor that their association is pressuring the GNA to adhere to the LPA.

“Libya needs an independent committee to investigate the kidnappings,” he said over the phone. “The GNA is the legal government in the country according to the LPA, so they have the responsibility to protect its citizens.”

Following recent pressure by the ADHR, the GNA has started to instruct militias to find the kidnappers. Yet Jalel Harchaoui, a doctoral candidate in geopolitics at Paris 8 University and a frequent commentator on Libyan affairs, said that armed groups charged with arresting kidnappers are also abducting people.

If abducted, civil activists face the darkest fate. They are particularly vulnerable in the east, which is controlled by strongman Khalifa Hifter’s self-described Libyan National Army (LNA). In the city of Ajdabiya, 121 abductions took place in March 2017 alone. Kidnappings are believed to be even more rampant in Benghazi, though exact figures are not available.

“The notion of grabbing someone because you don’t like them is deeply ingrained [in Libya],” said Harchaoui. “In Benghazi, people just disappear and sometimes the bodies turn up later. Incidences like that happen more often in Benghazi and within the pro-Hifter camp.”

The ADHR has people in Benghazi who are searching for the missing, which could be a dangerous task. But Tripoli is not very safe either. That became clear when Sherkse was detained by the Special Deterrent Forces (SDF) — a Salafist-leaning group that operates under the Interior Ministry — during an ADHR protest March 16. He was charged with atheism and detained for three days. But, unlike so many others, he was released unharmed.

“Fayez al-Sarraj [the prime minister of the GNA] told me that he called the SDF to secure my release,” Sherkse said. “Now I hope that he helps us find the disappeared.”