Libya's central government is powerless in the face of increased kidnappings for ransom and the targeting of civilians by militias. 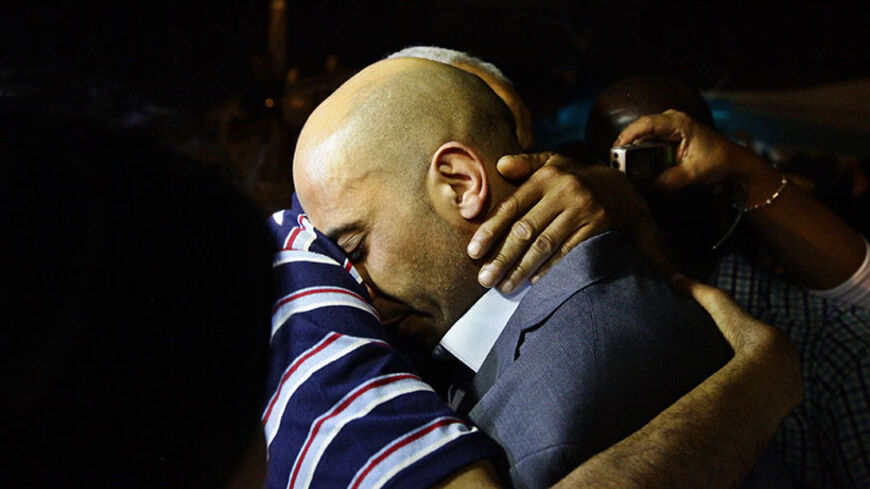 Tunisian diplomat Al-Aroussi Kontassi (C), who was kidnapped in Libya earlier this year, hugs a family member upon his arrival in Tunis, June 30, 2014. - REUTERS/Anis Mili

The latest fighting around Tripoli’s main international airport is just another example of the strength of the country’s rogue militias and the weakness of its central caretaker government. It also indicates the lawlessness of the capital and the rest of Libya, where kidnapping for ransom has been the norm since October 2011.

Some 2 million people — almost the entire population of the capital — are hostage to the warring militias. This has been the case since the former regime was toppled in October 2011.

In March 2012, a friend of mine, a university professor, was snatched from his car in broad daylight. He spent nearly 19 months in an illegal jail. Luckily, he was freed after the government of Ali Zeidan managed to take control of that jail in Tajura, east of Tripoli. In April of this year, another friend, also a university professor, was kidnapped in a predawn raid on his family home. Along with his two brothers, he was taken at gunpoint to a nearby jail, where they spent four months before being released after paying a certain amount.

Two of my relatives have been kidnapped in broad daylight: Uday, 18, is the son of my brother-in-law, while Sufyan, 19, is the son of my sister-in-law. The young men disappeared July 3 while traveling together from Janzour to Gargarish, west of Tripoli, where their ailing grandmother lives. Sufyan had come from Cairo to visit her and see his friends before returning to Egypt, where he has lived with his mother since October 2011.

On July 6, the family got the first phone call from the kidnappers, asking for 2 million Libyan dinars ($1.6 million) in ransom. They received another call on July 12 with a new ransom demand of half a million dinars ($406,000).

The two young men were visiting a friend in Janzour when they were stopped, and then disappeared without a trace. The mother in Cairo received the most recent phone call on July 20, in which she heard her son crying while being tortured.

They are two peaceful young men who happened to be in Libya, where peace is long gone and security is an aspiration that has eluded the nation since NATO and Qatar-backed rebels toppled the regime of Moammar Gadhafi in what became known as the February 17 Revolution. This revolution has brought Libya destruction and death over the last four years.

These cases are only a representation of the whole of Libya, where lawlessness prevails across the country and criminal gangs are free to do whatever they like. Hundreds of Libyans in Tripoli have been under siege, terrorized daily over the last four weeks because Islamist-backed Misrata militias are trying to take over the national airport south of the capital, which is controlled by the Zintan militia and its allies. So far, dozens of civilians have been killed, particularly in Qasr bin Ghashir, where the airport is located.

Libya's weak caretaker transitional government could do nothing but issue a statement on July 13 calling on both sides to stop fighting. It did not even dare to call the militias by their names for fear of revenge.

Last week, Libya’s foreign minister appealed to the UN Security Council for help, but nothing has happened so far.

It is important to remember that this is the same international body that adopted its infamous Resolution 1973 in March 2011 to "protect" Libyan civilians against what it called the brutality of the former regime. The resolution was adopted under Chapter VII of the UN charter, which means it automatically authorizes member states to use military force to enforce it. However, it is unlikely that any country will rush to arms like in 2011, when NATO and other countries hurried to enforce international law and protect the Libyans. Alas, it was all a false cry to achieve the objective of ending Gadhafi’s reign while leaving Libya in the mess it is in now.

The only difference between now and then is that the regime is gone and the "freedom fighters," NATO and Qatar, turned out to be dishonorable fighters with no interest in freedom as a noble cause. They are no better than gangs serving their own criminal agendas, or the foreign countries that helped arm and train them, only to let them loose in the country.

The UN Support Mission in Libya could also do nothing more than pull out its staff and relocate them to safety in neighboring Tunisia, leaving Libyans to their own fate.

The world has completely forgotten the plight of thousands of Libyan civilians languishing in illegal jails, particularly in Misrata, for the crime of belonging to another tribe or not supporting what has falsely become known as the February 17 Revolution. Sufyan and Uday are quickly becoming numbers among them. We are witnessing another episode of destruction and evil brought upon a nation that garners little international interest, as the world is occupied with other crises, such as the war waged against Gaza’s entire population by the brutal Israeli army.

NATO, Qatar and other countries that supported the upheaval in Libya are still responsible for Libya and the fate of its civilians, as per the same UN resolution they claim to respect and were willing to enforce in 2011.

While my family continues to pray for the safety of its sons, it is only yet another dark reminder of what became of the once stable Libya.