An Al-Monitor correspondent recently visited Libya and found his homeland sinking deeper into despair and dysfunction and possibly sliding toward disintegration. 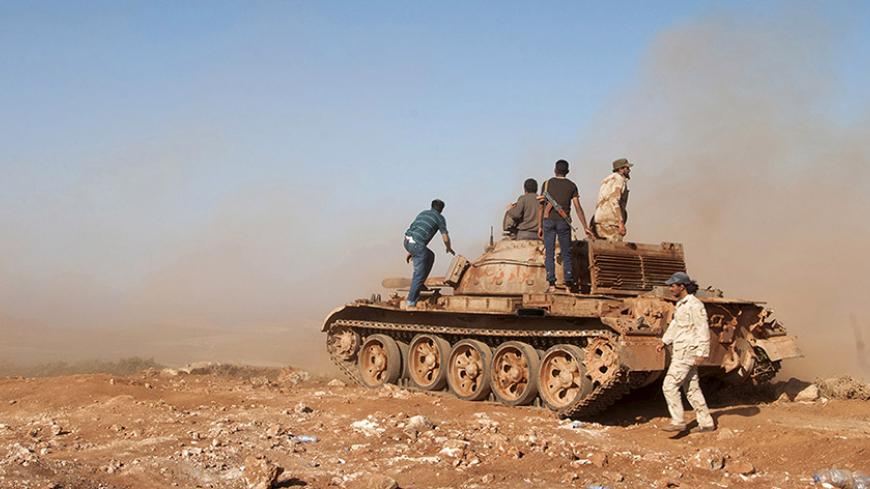 Members of the Libyan pro-government forces stand on a tank during their deployment in the Lamluda area, southwest of the city of Derna, Libya, June 16, 2015. - REUTERS

During a June-July visit to Libya, I arrived to find that daily life in my home country has become even more depressing than it had been the year before. Tripoli no longer has an airport. It was destroyed in August 2014 during the battle for control of the capital between Islamist-backed Misrata militias and fighters from Zintan militias.

An alternative airport, Mitiga, carved out of a former military base, serves direct flights from Algeria, Jordan and Turkey, but their unreliability makes the better option to fly into Djerba, the tourist resort in southern Tunisia, and then continue the journey overland. During this most recent visit, unlike previously, there were few tourists in Tunis because of this year's terror attacks in Tunis at the Bardo National Museum and Sousse, a beach town. In the past, the drive from Djerba to Tripoli usually took less than three hours, including the time wasted at the notorious security checkpoints inside Tunisia. Now, it can take up to 10 hours, so I was lucky to have made it in only seven.

Taxi drivers in Djerba will no longer drive all the way to Tripoli. One Tunisian driver, Zubir, told Al-Monitor, “It is not safe anymore. I have not been to Tripoli since January 2011.”

Because of the security situation in Libya, no Tunisian or even Libyan dares risk driving the entire distance. As a result, travelers have to take three different taxis to reach the Libyan border. Right before the border checkpoint, passengers must get out of the vehicle and walk into Libya.

Power outages are chronic in Tripoli, on some days lasting for 12 hours. They have become part of the daily struggle, one among the many other difficulties Libyans must endure.

By December 2014, almost all the embassies in the capital had closed, as countries withdrew their diplomats from the country. I was therefore surprised to see what appeared to be two guards sitting outside the Hungarian Embassy in the Ras Hassan district, southeast of Tripoli. There were lights on inside the building, so I asked one of them if the embassy had reopened, to which he replied, “I don’t really know. All I know is that I have been ordered to sit here.”

The following evening, there were no longer any guards outside the embassy. When Al-Monitor approached some neighbors to ask about the embassy, one replied cynically, “The guards might have been protecting thieves inside the building, not diplomats.” It is apparently not unusual for thieves disguised as guards to break into foreign embassies, as happened in June with the kidnapping of some dozen Tunisian diplomats from their consulate compound in the Jarab district.

Libya’s health sector is in shambles. The sick have been left to suffer in silence because of the lack of services, qualified nurses and medicines. Tripoli’s biggest hospital is full of patients unable to receive much by way of medical assistance. Those who have the means hire a private ambulance to take them to Tunisia for treatment. Such a journey costs anywhere from $1,000 to $3,000.

Al-Monitor spoke to a man named Jalal, who refused to reveal his full name for fear of retribution. He has worked in human resources at the hospital for nearly a decade. Jalal said, “Recently the staff has actually increased by more than 200 people, but none of them are qualified to do anything.”

On May 17, a group of five armed men had burst into the office of the hospital director and kidnapped him. When asked about the incident, Jalal said, “It’s likely that the unlucky director refused to employ certain people, so they sent their friends to fetch him.” There are of course no official figures, but kidnapping for ransom appears to have declined from the levels two years ago. Although they still occur, such operations have became more sophisticated, and according to Jalal, “professional, targeting rich people.”

Despite high unemployment, estimated at around 20%, almost all Libyans are receiving some kind of financial assistance, including a monthly minimum wage of around 500 Libyan dinars ($300) from the government without actually doing any work. Some people with jobs don't even report to their workplace.

One of the top managers at the National Oil Corporation (NOC), who spoke on condition of anonymity, said that the oil sector had been “forced to employ between 4,000 and 6,000 individuals between 2011 and this year.” He said, “Most of them are unqualified young men lacking basic requirements and skills,” and added, “NOC is in dire need of qualified individuals, particularly in seismology, drilling and surveying. Even NOC’s library, which serves as the brain of the oil sector, has added 11 new librarians, except not one of them is really a librarian! Most of the newly recruited workers are either former “thwar” [rebels] or strongly connected to them.”

All the international hotels closed their doors after the Islamic State (IS) attacked the five-star Corinthia Hotel by Tripoli’s seaside in January 2015. Thousands of foreign workers have left the country, while the number of illegal immigrants from sub-Saharan Africa appears to be growing by the day. The majority of them are like Musa, from Nigeria, who told Al-Monitor that he is in Libya waiting for a chance to get to Europe via the flourishing smuggling operations crossing the Mediterranean.

Meanwhile, Libyans seem to have adapted to their daily struggles, complaining less about the troubles they confront, be it the chronic power shortages, lack of security or medical care.

One thing that a visitor notices is the Libyan flag. The National Transitional Council adopted a new national flag in 2011, and many grew fond of its red, black and green stripes with a crescent and star in the middle. Full of hope and enthusiasm, Libyans at the time embraced the flag as a symbol of a new, free and flourishing country. It used to be displayed practically everywhere, in private homes as well as in taxis and government buildings.

Hope, however, has long since turned to despair. The new Libya is lawless. The flag has been completely forgotten and can be found discarded in the most unpleasant of places, such as rubbish piles, which are mounting in the capital’s side streets. Some still flutter, ignored and worn out, over some buildings.

Four years after NATO came to the assistance of the revolution that toppled the regime of Moammar Gadhafi and led to his murder, Libya continues its descent into chaos and toward possible disintegration. IS has consolidated its presence in Derna, in the east, Sabratha, in the west, and Sirte, in the center of the country.

One Sirte resident told Al-Monitor that almost all the checkpoints leading into the city are manned by IS members from Tunisia, Algeria, Sudan and even some from the Caucasus. He said they are treating people “nicely and with respect, unless you are suspected of being pro any other militia.”