Extradition of Libyan PM is a Distraction From Deeper Crisis

The Tunisian government's cloak-and-dagger extradition of Libya's former prime minister may have caused a political maelstrom in Tunisia, writes Mustafa Fetouri, but he will be just another prisoner held without charges or a chance for a fair trial in Libya. To add to the chaos, another bomb went off in Tripoli's busiest street Tuesday. 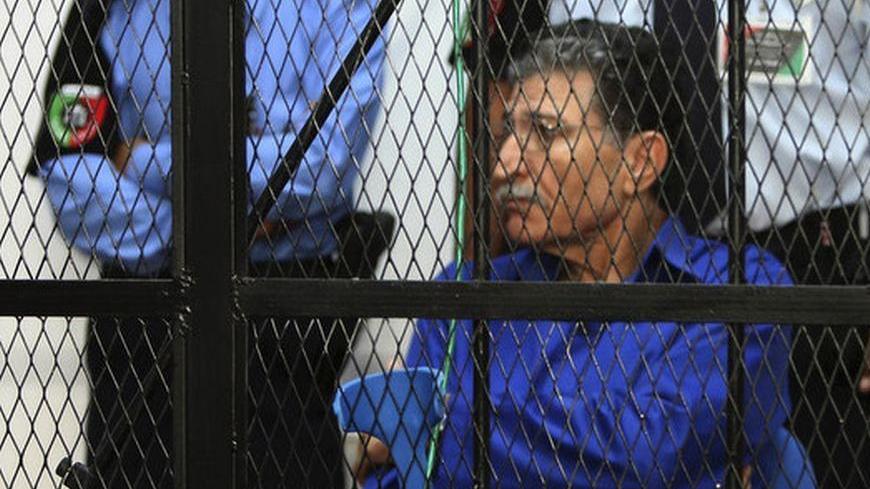 Former spy chief in Muammar Gaddafi's government, Bouzaid Dorda, sits behind bars in the dock during a court session in Tripoli June 26, 2012. Dorda, who was arrested last September in Tripoli. - REUTERS/Ismail Zitouny

In the earlier hours of Sunday morning, June 24, and under the cover of darkness, the Tunisian government handed over the last Libyan Prime Minister under the former regime, Baghdadi al-Mahmudi, to the Libyan authorities. As soon as the news broke, the debate raged on the legality of the extradition. The Tunisian president himself, who was touring the furthest point of his country’s southwestern border with Libya at the time, issued a statement not only distancing himself from the government’s action, but also questioning its constitutionality. His words immediately triggered the first serious dispute between the presidency and the government. By Tuesday night, various coalition partners in the Islamist-led government dominated by the Ennahda Movement had voiced their anger and concern on the government’s decision to bypass the president.

Nearly one third of the Constituent Assembly in Tunis boycotted debates on Tuesday (June 26) and called for a vote of confidence on the government of Hamadi Jebali after a debate scheduled for Friday.

In the meantime, in Libya, a bomb exploded outside the general consulate of Tunisia. Located in the middle of Jaraba street, one of the busiest in Tripoli, not far from the main shopping area of Ben Ashor, and less than one kilometer away from the fortified US embassy, the attack was a serious security breach. Whether this attack is linked to the extradition of al-Mahmudi or is another example of attacks on foreign diplomats and expatriates, is yet to be determined, if ever properly investigated. The perpetrators of similar attacks in Benghazi that targeted British and American diplomats and diplomatic compounds are still on the loose.

While Tunis debates the consequences of the extradition, Tripoli struggles with basic free and fair trial prerequisites like security. Less than two weeks ago, the Meshahia tribe around the town of Mizda, at the foot of the western mountains of Libya, was attacked by various militias, mainly from nearby Zintan. The fighting lasted for over 10 days before a shaky cease fire was brokered by other tribesmen. The battle left more than 100 people dead, 500 hundred injured and forced some 400 families to flee their homes. Just a few days ago, the situation was still tense and Meshahia called for international rights organizations and the UN to investigate the kind of weapons used against them. They claim that some sort of chemical gas was used, which was later confirmed by some doctors who treated the injured in Mizda hospital. Eye witnesses described scenes of white smoke rising from destroyed buildings on the outskirts of the partly destroyed town.

Earlier this month, Tripoli’s International Airport was overrun by Tarhouna militia, suspending flights for almost two days. Further south, Sebah, and Kufra in the southeast, remain almost completely outside government control while Bani Walid, southwest of Tripoli, is still a no-go area for the government. The latest news from that town is that it has already set up its own satellite TV channel to make “its voice heard” as one resident told me when I spoke to him two days ago. A Dutch journalist friend of mine just returned from Bani Walid, my home town, and said that you feel “Gaddafi is still alive and powerful! The late leader still commands strong support among the Warfalla people of Bani Walid.”

Meanwhile, four staff members from the International Criminal Court (ICC) are still held in Libya by the same militia that attacked Mizda. The ICC sent a delegation to visit them and received a Libyan state prosecutor at its headquarters in The Hague to secure their release to no avail. Those holding them are not government forces and they are not in government-controlled detention facilities. Saif al Islam Gaddafi, Gaddafi's son, such an important figure, is wanted by the ICC, but is still being held by the same militia outside any government control.

All this against the background of 100 jailed Libyan civilians who are still at the hands of various local militias, particularly in Misrata, Tripoli, Ziltan and Sirte.

Failing to provide an effective national leadership, the NTC is trying to divert attention from these atrocities by putting pressure on the Tunisian government to hand over al-Mahmudi under very suspicious circumstances. It is rumored that the Libyan authorities have paid millions of dollars to the interim government in Tunis, with promises of over 100,000 jobs for unemployed Tunisians seeking to work in Libya. Considering the economic hardships Tunisians are going through now, such rumors are a plausible scenario.

It will be interesting to see if a high-ranking former official like al-Mahmudi will ever receive a fair trial under the prevailing circumstances in Libya. It is worth pointing out that al-Mahmudi was a bureaucrat with very limited powers and he had never played any military role in the war that eventually toppled Gaddafi with the help of NATO last year. He is not wanted by the ICC, which excludes him from any charges of major war-related crimes. If he ever makes it to the courtroom, we will see what charges the authorities can prove against him — and what kind of guarantees the Libyan authorities could offer for a fair trial.

Mustafa Fetouri is an independent Libyan academic and journalist. He won the EU’s Samir Kassir award for the best opinion article.