Libya's Tribal Cleansing: Why is the World Silent Now?

The Western powers came and went in Libya, and now some Libyans are being targeted due to their presumed loyalty to former leader Moammar Gadhafi, writes Mustafa Fetouri, an academic and journalist. He says the National Transitional Council cannot ensure a smooth transition, and wonders what has become of an international community that vowed to protect Libyan civilians. 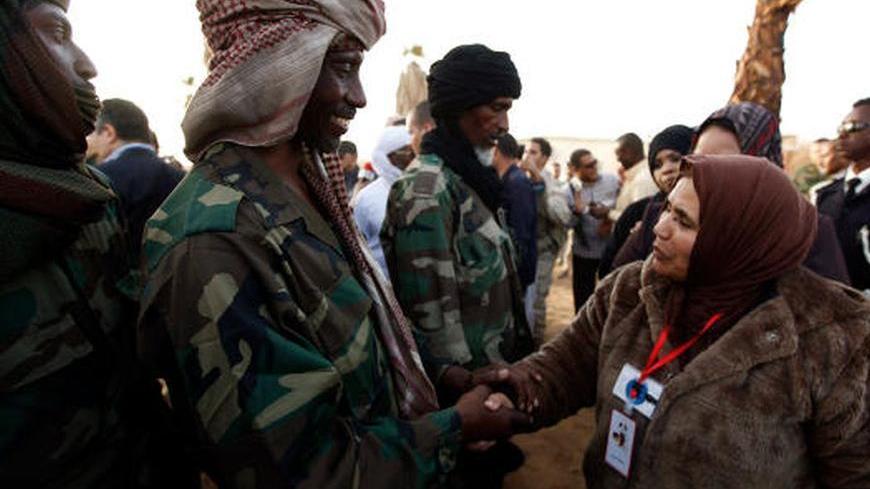 A representative from the Tibu ethnic group shakes hands with a Tuareg woman in Sabha April 1, 2012. Libyan Prime Minister Abdurrahim El-Keib flew to the desert oasis city on Sunday to try to patch up a tribal dispute that has killed about 150 people over the past week and underscored the ethnic faultlines threatening Libya's stability. - REUTERS/Anis Mili

Tawergha is a Libyan coastal town about 30 km east of Misrata on the road to Sirte. It is home to approximately 30,000 people, mainly black Libyans. When the revolt against the Gaddafi regime spread to Misrata, Tawergha became the de-facto front line between the rebels and the army fighting for the regime. Today Tawergha is a ghost town: its homes looted, farm land destroyed and some of its inhabitants forcefully displaced or simply vanished. A couple of thousand people fled to Bani Walid, while the rest dispersed to cities as far away as Benghazi or Tripoli.

However, that did not save them from humiliation and imprisonment where ever the rebels could reach them. The Internet is full of videos showing glimpses of the misery the people of Tawergha suffer even after they have fled their own homes. In some videos, black Tawergha men were forced to eat the flag of the former regime while others were forced to say "we are slaves" and other self-humiliating phrases. They are being called "n-----s" and all sorts of dehumanizing names. I saw a video in which 10 of those people, with their hands tied behind their backs, were shouted at, insulted, and then shot dead in cold blood.

The Tawergha people's fate is only one example of what is taking place in Libya nowadays. It is "tribal" cleansing in the most despicable sense of the word.

Bani Walid, home to the Warfalla tribe and my hometown, was under siege from January to March 2012 just because its tribal leaders, fearing unrest, looting and lack of security, refused to let the rebels enter the city. The town was left without any medicine, fuel or food supplies for almost three months, pushing it to revolt against the rebels and the loose interim government. Failing to force their way into the city, rebels camped on the highway and started to pick up any person, including women, they thought was a "loyalist." When that failed to make the city surrender, militias in Tripoli started to pick up natives of Warfalla wherever they could find them.

Sirte, home to the Gaddafa tribe, the late Libyan leader's own tribe, have suffered tremendously after the former regime fell and the city was captured by rebels last October. Thousands of people were displaced, hundreds jailed, many more simply disappeared. Homes were demolished and farm land destroyed.

The situation in Sabha, the capital of southern Libya is even worse, and bloodier. There, the main targeted groups are the Tabu and Tuareg, who also happen to be black Libyan citizens long since accused of supporting the old regime.

Earlier in the Libyan civil war it was widely believed that black African mercenaries were fighting alongside the former regime, when in fact some of those paraded on TV screens were actually regular army conscripts from the black Libyan populations mostly in the south. Such media portraits laid the background for the later ethnic cleansing and apartheid policies being implemented by the rebels and militias, prompting international groups to call for action. Amnesty International has, on a couple of occasions, condemned such violations and called upon the Libyan interim government to take measures to protect its citizens. It also condemned the use of torture and other mistreatment of prisoners. It's estimated that over one million Libyans are refugees in neighboring countries, which makes the total number of displaced people around two million. That's one-third of the entire Libyan population.

A dozen of my friends, mostly university professors and highly qualified individuals, have already been killed, and are missing or in jail without any charges, access to lawyers or visits from their own families.

Does Libya mean anything to the world anymore; a world that stood up in support of its "revolution"?  Why are the Western guardians of freedom and defenders of human rights, particularly France, the U.K, and the U.S., tight-lipped about the tragedy in Libya? Did NATO not intervene in Libya to "protect civilians" in the first place? Or does "civilians" only certain Libyan tribes, but not others?