How a small Libyan town insulated itself from surrounding chaos

The town of Bani Walid is leading Libyans by example, practicing self-governance and avoiding the armed conflicts that have become common elsewhere in the country. 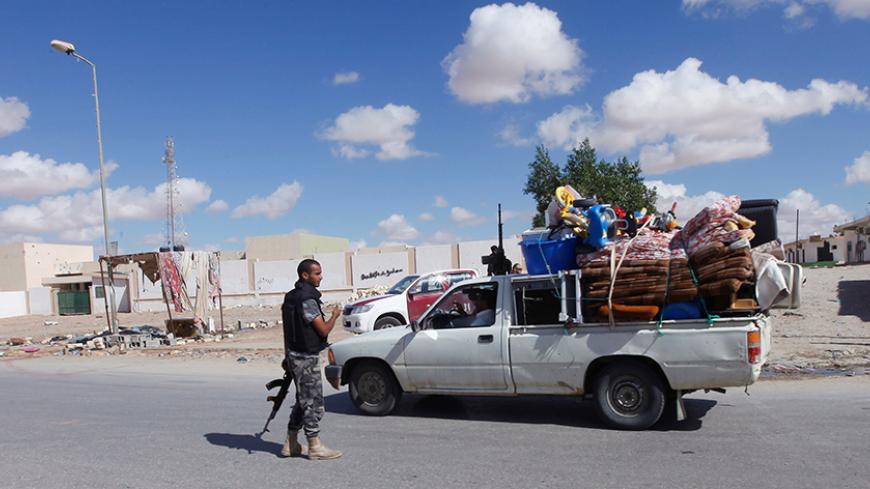 Civilians returning to their homes with their belongings pass a checkpoint manned by police in the center of Bani Walid, some 180 kilometers (112 miles) southeast of Tripoli, Nov. 3, 2012. - REUTERS/Ismail Zitouny

In today’s chaotic Libya, one town stands out as a safe haven where crime rates are down and fighting is considered a thing of the past. Bani Walid is a mountainous town some 180 kilometers (112 miles) southeast of Tripoli, the capital. Its residents and those who had been displaced from it are secure. It is the home of Libya’s largest tribe, Warfalla, whose members are scattered around the rest of the country. Bani Walid and its people became famous for their relentless steadfastness against the NATO-backed rebels. The last town in Libya to be captured by them in September 2011, it soon freed itself of the rebels and gangs.

In 2012, its own volunteer security brigade forced the few rebels out of town, and the town’s elders set up the Social Council of Warfalla Tribes (SCWT) as a civilian collective leadership body responsible for managing its affairs.

I've visited Bani Walid, my hometown, many times over the last couple of years. Every time I come to Libya I check on friends and family and talk to people about how the town is progressing. On my September visit, I was in for a surprise. Bani Walid had actually become a beacon of peace, security and a mecca for those seeking shelter from other troubled towns in Libya. During the second half of September the town received nearly 200 families who fled Sirte as the Islamic State strengthened its control of the coastal town some 250 kilometers northeast of Bani Walid. I spoke to SCWT’s chairman, Salah Maeuf, a professor of history at the local university and tribal leader. “I answered the call when my town needed me,” he explained when asked why he accepted the leadership position. He said, “Bani Walid now is far different from what it was three years ago. It is more peaceful and much more secure compared to the rest of Libya.”

Bani Walid's own volunteer security force, a group of civilians commonly known as al-Saria, keeps their town safe. Crimes such as extortion and kidnapping shot up between 2012 and 2014, while the small official police force in town was unable to work properly due to a lack of effective government across Libya. Salah told Al-Monitor that al-Saria “enjoys the support of our council, our social-tribal cover and legitimacy.” In practical terms, this means no known criminal or suspect will be able to claim tribal protection once implicated in any crime, and many have been jailed and disowned by their tribes in the process.

The majority of people in Bani Walid support the work done by the volunteer security force. It is now rare to see arms on display in the streets. The checkpoints around the town are manned by teams of guards made up of civilians and former police officers. Inside the town itself there are no checkpoints at all. As a demonstration, Salah encouraged me to witness a small celebration commemorating the third anniversary of the decision by the General National Congress on Sept. 25, 2012, allowing the militias to invade the town, claiming it harbors remnants of the former regime. Such events in lawless Libya are usually celebrated by gunfire, among other activities. Yet, this time around, the celebration went smoothly without a single bullet fired nor a single arm on display.

The event brought together victims’ families and representatives of other tribes across Libya who came to express their support for Bani Walid and to try to learn from its experience in self-governing.

While chaos and a lack of security dominates the lives of most Libyan cities and towns, Bani Walid is increasingly becoming the safest place in Libya thanks to its own people, led by its elders. In harmonic social cohesion, people cooperate to solve the challenges facing the town. The latest such challenge is accommodating and feeding the nearly 200 families who fled Sirte. Many of them are Warfalla — meaning they have relatives and family members in Bani Walid — but many others are not. In previous waves of displaced people coming to the town, the tribal council used to donate apartments and food, but this time residents of Bani Walid are volunteering to provide help, ensuring that not a single displaced family goes without shelter, food and other necessities. Displaced children are sent to the local schools.

Since its creation in late 2011 right after the war, the tribal council has provided political and social leadership, and aims to play a role at the national level. So far it has attracted at least another 50 tribes from all over Libya that share its agenda of rebuilding the country through reactivating its social network of tribes, despite the political wrangling that has so far failed to produce any tangible results.