Libya on alert after murder of four tribal peacekeepers

Four men belonging to a local Libyan tribe and working on mediations between warring tribes were murdered recently, raising questions about reconciliation efforts. 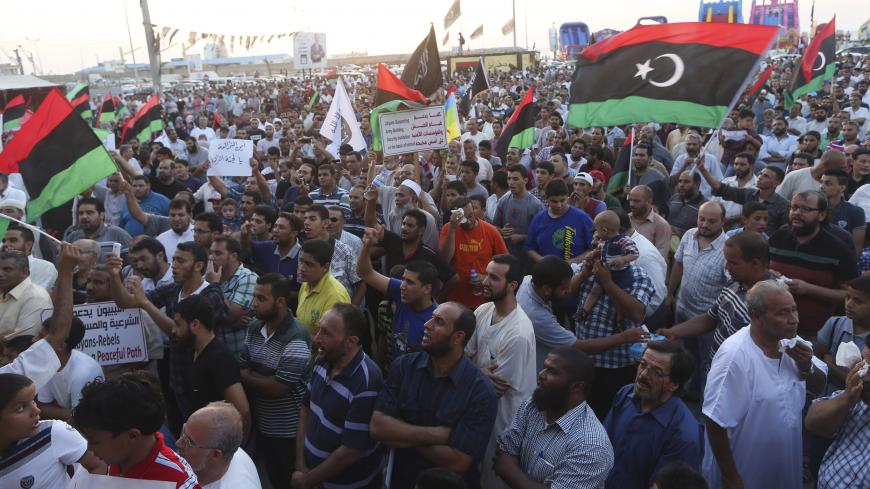 Demonstrators gather to protest against the Libyan parliament's decision to call on the United Nations and the Security Council to immediately intervene to protect civilians and state institutions, Benghazi, Libya, Aug. 15, 2014. - REUTERS/Esam Omran Al-Fetori

TRIPOLI, Libya — Libya woke up to the news Sept. 29 of a heinous crime in which four men from the country’s largest tribe had been murdered as they were driving back home from the town of Mizda, south of Tripoli, to Bani Walid in the west of the country. Two of the victims were prominent members of the Social Council of Warfalla Tribes (SCWT): Abdulla Antat, the head of the reconciliation committee that has been leading social reconciliation sessions among different tribes in the war-ravaged country, and Khamis Sabaka, a member of the same committee. The two other victims are Adil Milad, a policeman, and Musa Mansali, a driver.

The four men had just finished their latest successful mission of peacemaking that saw them kick-start another round of reconciliation between the Mashashia and Zintan tribes in Libya’s western mountain region. The two tribes have been at odds, resulting in deaths and displacements of large numbers of Mashashia tribe members at the hands of their neighbors, the Zintan, in the aftermath of the civil war of 2011, with the Zintan revolting against the regime of former President Moammar Gadhafi and the Mashashia supporting the regime.

Mashashia’s local council chairman Taher Daw released a statement Sept. 30, offering the council's condolences to the Warfalla tribe, saying, “The murder had a criminal motive and not a political one [as initially thought]. We identified the perpetrator, and we are now working on handing him over to the office of the prosecutor general in Tripoli.”

The statement did not name the suspect, who "confessed to his crime and said that he acted alone."

The murder brought condemnation from almost all tribes, both governments, the parliament as well as the United Nations Support Mission in Libya. They all paid tribute to the slain men, calling them peacemakers and demanding that the suspect be brought to justice.

In a Sept. 29 statement, the SCWT condemned the murder and promised to continue its efforts for national reconciliation all over Libya.

Al-Monitor attended the massive funeral of the victims in Bani Walid, southwest of Tripoli, on Sept. 30, in which SCWT’s chairman, Muftah Aftas, paid tribute to the victims, promising that "the SCWT will not be deterred by the murder of two of its best men but will continue its efforts for national reconciliation across Libya to end this division of the homeland and bring about stability and peace.”

Aftas called for calm and asked his tribe not to seek revenge since the suspect has been apprehended, emphasizing the longstanding “tribal bond between us and our brothers, the Mashashia.” The two tribes have long been allies, and in the civil war of 2011 they both were supporting the Gadhafi regime.

Since the civil war in 2011, Libya has witnessed a bitter political divide and tribal tensions. It has two quarreling governments: the Government of National Accord (GNA) based in Tripoli, recognized by the United Nations and headed by Fayez al-Sarraj, and the government based in Tobruk, in eastern Libya, that is not recognized by the international community. Without an effective central government and in light of the Islamic State’s (IS) infiltration, the country is lacking security and organized law enforcement agencies with an ineffective police force that faces hundreds of armed militias who control many parts of the country. This, along with easily available arms, has caused an increase in all kinds of criminal activities.

Without giving exact figures, the spokesman said, “Unusual criminal activities including murder, extortion and kidnapping are on the rise.”

The ongoing fighting by forces loyal to Tripoli’s government against IS in Sabratha, west of Tripoli, is only further proof of what the prosecutor general referred to in regard to the security situation. Forces loyal to the GNA along with loyal militias have been battling IS inside the city since Sept. 19.

In Sabratha, IS fighters are enjoying some support and sympathy from local tribes, particularly those that are linked to human traffickers, as Sabratha has long been the main departure point for migrants making the dangerous journey across the Mediterranean to Europe. The city has also been a kind of safe house for IS fighters smuggled from Tunisia, less than 70 kilometers (43 miles) to the west. On Feb. 19, 2016, the US Air Force had targeted what it called a training camp for IS fighters, killing 43 people.

Meanwhile, a new round of talks brokered by UN special envoy to Libya Ghassan Salame took place in Tunisia Sept. 26, focusing on the amendment of the Libyan Political Agreement signed in Skhirat, Morocco, on Dec. 17, 2015.

Parties to the talks are the GNA and its Tobruk-based rival aimed at reaching a political compromise to unite the country and establish an effective government with united security forces capable of securing the country.

The statement by the SCWT did not mention the talks directly but instead referred to them as “the worthless mediations abroad that will always fail.” Instead, the statement called on all Libyan tribes to meet in Bani Walid in November to “honor the martyrs who paid with their lives for peace by starting a national reconciliation that will unite the country and its people.”