In Divided Libya, Elections Are Only Part of the Answer

Libya’s first election in 40 years has been postponed from the long-promised date of June 19 to July 7. Mustafa Fetouri doubts that the election will be held on the new date or at all in the near future, and argues that it could actually lead to more bloodshed and greater social tension in a tribal society where revenge is the order of life. 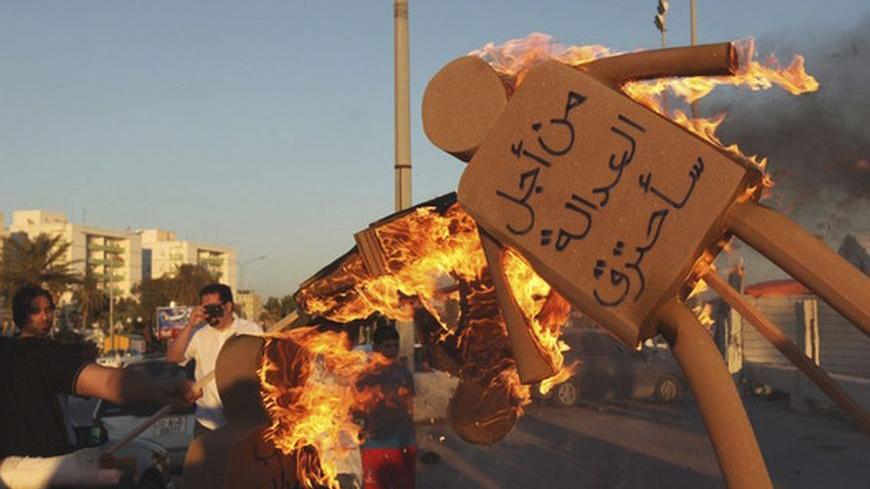 Men set fire to sponge dolls representing the demonstrators' rejection of the current allocation of seats in the elections for Libya's National Congress during a protest in Benghazi June 9, 2012. - REUTERS/Esam Al-Fetori

Libya’s first election in 40 years has been postponed from the long-promised date of June 19 to July 7, with serious doubt that the election will be held on the new date. I, among many commentators, predicted the delay and I now doubt credible elections could be held in the near future. The National Election Commission (NEC) cited logistical and procedural obstacles in announcing the delay. However, what the NEC failed to mention was that the real obstacles are deeper and more serious, the kind of obstacles that make elections far from conclusive, let alone democratically representative.

Libya as a country remains as divided as it was the day after the former regime was toppled with NATO's help in a bloody war that lasted almost a year. The national reconciliation process never got anywhere, leaving the Libyan people further divided than they were during the war. The interim government remains weak and unable to assert its authority over large parts of the country, particularly in Kufra and Sebha in the south and other smaller regions in the north and northwest.

Since January 2012, Bani Waild, southwest of Tripoli, has been a no-go area for the interim government. Tripoli, the capital itself, is not safe either, particularly around the airport and seafront close to the city center. Less than a week ago, a heavily armed militia overrun the airport and suspended all flights for almost two days. Strangely enough, the militia drove through several pro-government checkpoints along the way from their base in Tarhouna, nearly 90 kilometers away! Last month, the prime minister’s office, in the government compound just off Sekaa Road in Tripoli, was attacked and one of his guards killed by another militia angry for the delayed financial-compensation payments. The irony is that in both those major attacks, no one was charged or prosecuted even though the government knows precisely who was behind both.

Just last week the US consulate building in Benghazi, where the revolt started last year, was attacked by a group calling itself “Brigades of Omar Abdulrrahman,” the blind Islamic clerk serving a life sentence in the United States since 1996. This group never existed before, at least not in Libya.

On June 7, Algeria sentenced two Libyans to life imprisonment for their role in providing weapons and support to al-Qaeda in the Islamic Magreb, an al-Qaeda offshoot active in the African Sahel region. Three days ago, a German friend of mine reported from Benghazi that a large, fully armed militia demonstrated demanding implementation of Sharia law in the city which is on the verge of breaking away from the rest of the country if the pro-federalists get their way come the July elections. Libya seem to have become beacon of dangerous armed militant groups that pose a threat not only to its future as state but to its neighbors as well. Egypt to the east and Tunisia to the west continue to complain about increased arms and drug smuggling from once-safe Libya.

The election law is also flawed and being protested by various cities and towns in the country. Bani Walid is among them. With a population of more than 90 thousand, it was allocated two seats, which the locals say does not provide sufficient representation. It is likely that this town and Sirte will boycott the elections even on the new scheduled date.

Furthermore, the number of externally and internally displaced Libyans is close to one-fifth of the total population of some 6 million people. In a televised interview, an official admitted that no one reregistered to vote or contest the elections in the town of Tawergha — previously home to 30 thousand inhabitants before its entire population was forced to leave its homes late last year. The National Transitional Council (NTC) further lost any credibility while its appointed government was paralyzed by internal conflict and widespread corruption surpassing that of the former regime. Lack of leadership made the NTC look like a loose coalition of frightened people with a tainted past, afraid to face reality while its interim government lacks cohesion and political vision.

However, delaying the vote will not solve the problem, while at the same time, running credibly democratic elections under such leadership is risky and doubtful.

On one hand, Libyans remain divided among themselves with their hopes of peace and social tranquility hanging on the promised elections that might provide stability via a strong national government. On the other hand, delaying the elections means extending the political vacuum, prolonging the transitional period and further plunging the country into chaos.

Still, organizing elections even in the new date does not mean a smooth transition to state rebuilding. It could actually lead to more bloodshed and greater social tension in a tribal society where revenge is the order of life. Unless a national tribal reconciliation process succeeds in settling the aftermath of the war, small quarrels over election results could easily become national shooting matches in which everyone is a loser.