How to help Libya … before it’s too late

The Islamic State is gaining ground in Libya, already having seized control of Sirte, an hour's flight from southern Europe. 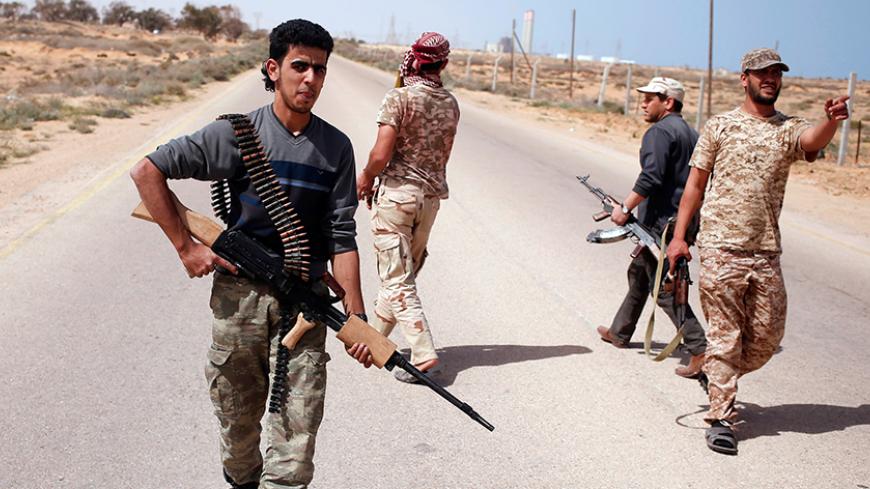 While the US-led coalition has been busy attacking Islamic State (IS) strongholds in Raqqa, Syria, and Mosul, Iraq, the faraway coastal city of Sirte, Libya, has been seized by the extremist group. Only an hour's flight from Europe’s southern shores, Sirte fell without a shot of resistance. What began as a small group of locals pledging allegiance to IS has evolved into a sizeable force that has extended its control nearly 40 miles west of Sirte and nearly twice that to the east, threatening the city of Ajdabiya and even Benghazi.

Omar, a civil servant who requested the use of a pseudonym, has lived all of his 30 years in Sirte. He told Al-Monitor by phone, “IS now has full control of the city and all roads leading to Sirte in all directions.” IS has imposed laws banning tobacco sales and smoking and ordering women to cover their hair. “Actually, my own brother was jailed for a couple of days because they caught him smoking in the street,” Omar said. Like other residents, he is extremely worried and is already planning to leave if his mother agrees to go with him.

Sirte is strategically situated at the crossroads connecting Libya’s three regions: Fezzan in the south, Cyrenaica to the east and Tripolitania to the west. In addition, it is close to the country's main oil terminals at Brega and Ras Lanuf as well as Sidra. Ras Lanuf could well be the next safe haven for IS' top leaders. On Dec. 9, England's Daily Mail cited the Iranian news agency, FARS, as reporting that an injured Abu Bakr al-Baghdadi had already arrived in Sirte, having fled his headquarters in Mosul with Turkish assistance.

Given the absence of a functioning state in Libya, it would not be surprising if IS leaders decamped to Sirte. The increased air bombardments of IS strongholds in Syria and Iraq will likely hasten their departure to Sirte, if they have not already left.

During a visit to Tripoli last spring, Omar had talked to Al-Monitor about “some 300 fighters, mainly foreigners, concentrating at the Ouagadougou Halls,” the huge conference center in Sirte built by Moammar al-Gadhafi’s regime to host major events such as Arab League and African Union summits. In early December, Omar spoke of there now being 3,000 or 4,000 fighters.

“Almost two-thirds of them are foreigners,” Omar said. “They are young people from Tunisia, Algeria, Mali, Chad and Niger. Now they can move freely all the way to Ajdabiya and beyond. If you are heading west, the checkpoints are manned by Arabs with Tunisian and Algerian accents, but when you head east, you encounter Africans speaking broken Arabic with a heavy accent.”

IS fighters in Sirte are hard to take out. According to Omar and lorry drivers passing through the area, IS fighters do not move about in big groups in the streets or near former government buildings. Omar observed, “They have taken over many houses whose owners have fled in fear and use them as bases for meetings and organizing their activities.”

Omar and other Sirte residents had reported airplanes constantly buzzing over the city long before France's Dec. 4 admission to having flown reconnaissance missions over IS-controlled areas in late November. In June, the United States admitted to having launched at least one drone strike, which it said killed Mokhtar Belmokhtar, the notorious al-Qaeda leader, in Ajdabiya, east of Sirte.

There are two main reasons why Libya fell prey to IS. First, as noted, the country lacks a strong central government. For now, the two quasi-governments still sit in Tripoli and Tobruk, backed by their various militias. The Libya Dawn armed alliance had taken over Tripoli in August 2014, forcing the official, internationally recognized government to relocate to Tobruk. Second, about 200 young Libyans who fought for IS and Jabhat al-Nusra in Syria have returned home with orders to focus on the local level, including fomenting jihad.

The anti-IS coalition in Syria and Iraq should move quickly and help Libya before it is too late and it finds itself in a similar scenario there. Its assistance could take different forms. First, pressure should be applied to the two rival governments to accept the UN-proposed unity government as quickly as possible. It is unlikely IS can be defeated with air power alone, as evidenced in Syria and Iraq, so a unified government is necessary to undertake operations on the ground.

Second, the UN should lift the arms embargo imposed on Libya since the 2011 war. This would allow a new government to acquire the military hardware it needs to mount a serious fight against all terror groups in the country, including Ansar al-Sharia in Benghazi. Third, Turkey and Qatar should stop interfering in Libyan internal affairs. Libya’s internationally recognized government has accused both countries of supplying arms to Islamists in the western part of the country.

If the international community does not move quickly, it might soon find itself waging a pointless war against a well-prepared IS in Libya. Before any air campaign starts targeting the strategically located Sirte, the city should be liberated by ground troops and established as the seat of government, so Libya can establish the capability needed to fight for itself.