Libya's Hifter bets on Tripoli-based government to fight IS first

The Government of National Accord's newly created Presidential Guard and Khalifa Hifter’s forces are playing a waiting game when it comes to fighting the Islamic State, which further broadens the divide between the two. 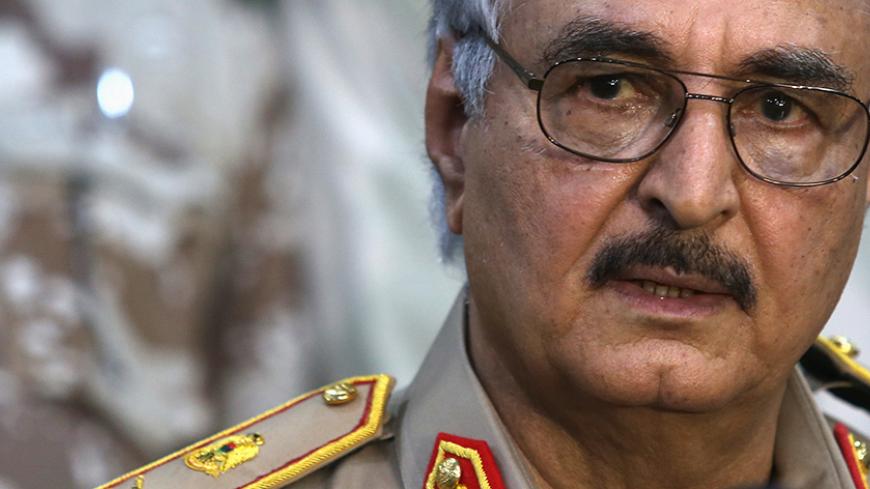 Gen. Khalifa Hifter speaks during a news conference at a sports club in Abyar, east of Benghazi, May 21, 2014. - REUTERS/Esam Omran Al-Fetori

On May 3, units of the Libyan Armed Forces commanded by Gen. Khalifa Hifter moved from Benghazi westward, launching what was said to be an offensive on Sirte to dislodge the Islamic State, which has been in control of the coastal city since February 2015.

Hifter, under the Tobruk-based elected parliament, has vowed on many occasions to liberate Libya from terrorism, and after liberating Benghazi, Sirte is only a logical destination since it is now IS’ stronghold in Libya.

As if to remind Hifter that it is still there and to show its force, the terror group moved out of Sirte and in a few hours took more towns and villages, including Zamzam, Bey, Gadahia and the strategic town of Abu Grain. Westward, IS fighters got to Sdada Bridge, some 100 kilometers (60 miles) from Misrata, a coastal city with militias that have been battling the extremist Islamic group. From a strategic point of view, IS did not intend to keep such small villages, as instead it wanted to kill and displace as many people as possible. Most of the residents of those villages and towns are ex-military men with links to the former regime, so getting rid of them helps IS.

Hifter’s spokesman, in an unusually long televised press briefing, described what he said was the current situation of the Libyan Armed Forces in Benghazi and elsewhere, and confirmed that IS’ stronghold in Sirte is the next target. However, instead of sending his troops directly to Sirte through the coastal highway, as a shorter route Hifter chose to move away from the coast and station his forces in the small desert town of Zalla, some 300 kilometers south of Sirte. In explaining this rather strange move the spokesman said, “We did not want to engage in unnecessary fights near populated and sensitive areas,” referring to the Ras Lanuf oil terminals that are on the coastal road to Sirte but still under the control of local militias that have restricted oil exports for nearly two years now.

Zalla is very close to some of the oil fields that pump oil to the terminals, which means controlling those fields could be useful since those who control the fields could stop the oil flow altogether.

It seems that the long-awaited attack by the Libyan Armed Forces and Hifter on IS in Sirte has been put off for now. It is unlikely that such an attack will happen before Ramadan, which starts in the first week of June. However, Hifter is determined to attack IS in Sirte, not just to keep his promise to the Libyans to rid the country of terror groups but also for a very personal reason: Many of his own tribesmen live in Sirte.

The Government of National Accord also decreed the creation of what it called the Presidential Guard as a pivot for the future Libyan army, further putting Hifter’s survival as chief of staff of the Libyan Armed Forces in serious doubt, despite the fact that he was appointed by the only elected legislature in the country. He has so far proved himself at least by liberating Benghazi from the Islamists. During a meeting on Libya in Vienna, the Presidential Guard was presented as a worthy force that deserves support — mainly to lift the arms embargo imposed on Libya in February 2011 — from the international community. Since the meeting in Vienna supported the Government of National Accord and approved of its actions so far, getting the same support for its army may only be a minor detail.

Those who met in Vienna — including representatives of the United States, Russia, Italy, Germany and 17 other countries, including Libya's neighbors — seemed to buy into the Government of National Accord’s claim that it was building a new army, and US Secretary of State John Kerry as well as his Russian counterpart Sergey Lavrov promised to push for lifting the embargo at the United Nations Security Council.

However, the Presidential Guard is no more than old militias regrouped under a new name in an attempt to integrate them into a professional army that is yet to be established. Previous attempts to do the same have ended in failure because they tried to integrate militia members loyal to their own groups into a disciplined army loyal to the state, without a workable process. This time around, Misrata-based militias and others seeking new legitimacy and a legal cover managed to trick the Government of National Accord into providing these distinctions by accepting the militias as forces loyal to the government. This new army has already scored what it calls a victory against IS, west of Sirte. Yet IS did not suffer any real military defeat other than being pushed back from small villages and towns it had taken west of Sirte — none of which have important military value.

It is clear that this new Presidential Guard and Hifter’s forces are playing a waiting game when it comes to fighting IS. Hifter does not want to move on Sirte, hoping that the Presidential Guard will do so first, particularly since Misrata itself is threatened now. He might be hoping that such a battle will exhaust — if not finish — either side; any winning force will be left depleted. Then, most probably, he would make his move and finish off the victorious side. Misrata-based commanders of the Presidental Guard could well be making the same analysis and playing the same game.

Instead of being united to face IS as their common enemy, which threatens the entire country, both Hifter's and the Government of National Accord’s forces appear to be interested in fighting each other and not the terrorist group. If the threat of IS does not unite Libyans, what else could? IS appears to be winning at least by further dividing Libyans more than they already were.