More than 300 inmates at the notorious Tajura prison in Libya have been wasting away since last year, writes Mustafa Fetouri. The interim government finally took over the prison in March, but the inmates, including Fetouri's colleague, have yet to see a judge or be charged with an official crime for fear of retaliation from the "revolutionary brigades." 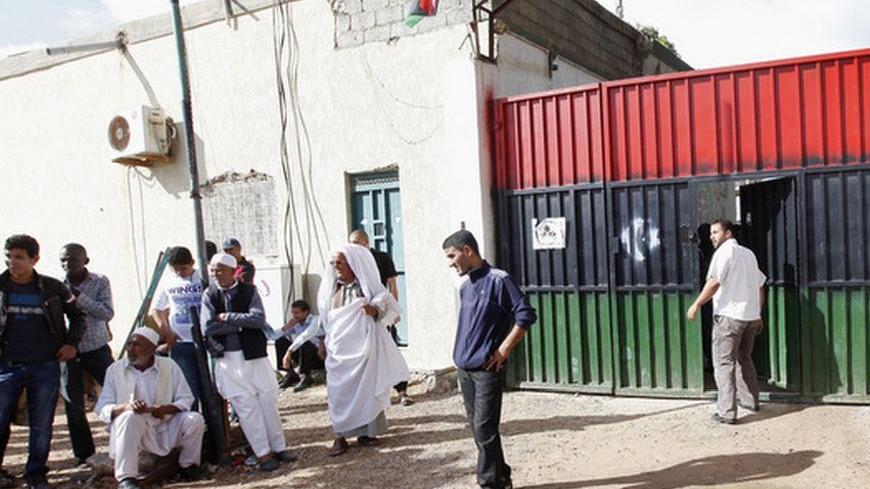 Families of prisoners gather outside a prison in the Tajura area of Tripoli. - REUTERS/Ismail Zitouny

The 300-plus inmates at the notorious Tajura prison, 10 miles east of Tripoli, were relieved when they woke up one late-March morning to find the prison guards had been replaced. They were no longer bearded-men in civilian clothes, but the Libyan police in regular, official police uniforms. The interim government had finally managed to gain control of the notorious prison, in which some five different nationalities are being held without trial. Among them is my long-time friend and colleague from a university in Tripoli. He, just like many others, was picked up by armed militias in and around the Libyan capital. He is a university professor who was kidnapped from the busy shopping district, Gargarish last March.

Some inmates have been in the prison since October 2011 without trial, or charges. The change of guard should have brought, not only relief but, immediate freedom and the opportunity for the prisoners to have their day in the court of law, which is ironically still absent in Libya.

Unfortunately the inmates’ relief was short-lived. Three months after the interim government took over the illegal prison, no one has been charged nor released. Through a smuggled mobile phone, my friend managed to call me last week. I joyfully expecting him to tell me that he is finally free. I was disappointed when he said that he is still in jail and has yet to see a judge even though the he was promised in March.

I asked him how could he be tried, since the arrest was illegal, and the accusations against him baseless? Why should the government take over the prison and keep everybody locked up while the basic legal procedure in jailing those people is illegal and the presumed case against them will be thrown out by any respected judge?

My friend had an answer. At least he has a lawyer now, who explained that he should have been freed long ago but the interim government is afraid of the “revolutionary brigades.” Despite the fact that his incarceration is illegal and took place outside the law, the government “dare not free anybody at least for now,” the lawyer said because the militias would become very angry at the government. Clearly, the militias want their unlawful actions legitimized by the government and freeing the illegally held inmates will make the militias involved criminals. When I asked my friend about the next step he said that “..it could be another couple of weeks or months before we have our day in court.” He added, “we are not in a hurry as if we do push to go to court the militia might learn of this activity and they could easily take control of the jail at any time.”

Among the 300 inmates there are Chadian sheep shepherds, Malian shopkeepers and Nigerien domestic workers. Some of them had never been to Tripoli before and lived and worked in other Libyan towns. Black Africans were wanted from day one in the civil war. As earlier as February 2011, just days into the revolt in Benghazi, the “revolutionary brigades,” in unholy alliance with the media declared them mercenaries fighting for the former regime, thus putting all of them in immediate danger.

Ever since then not one piece of credible proof has been produced.  During the war months, as the rebels took more cities with the help of NATO, black Africans and black Libyans were  sought and killed and sometimes cut into pieces while still alive. Those who ended up in Tajura were lucky; in a way they were saved.

While innocents languish in illegal detention centers and jails the National Transitional Council is busy passing laws that are not only outrageous, but also contradict any acceptable legal criteria. The latest of such laws is law no. 38, which gives blanket immunity to anyone who acted with the intention of “helping the revolution succeed” or “protect it after it succeeded.”

Such immunity neither expires over time nor does it specify which criminal acts could be prosecuted before the law. The immunity covers acts such as looting, theft, torture, kidnapping, and above all, helping NATO topple the former regime, destroying the country and killing dozens of Libyan civilians in the process..

At the same time, the NTC passed another Nazi-like law which criminalizes any person who is “caught” in the act of “glorifying the dictator or any of his sons or his achievements,” the dictator here being, of course, the late Muammar Gaddafi. Punishments range from a few months in jail to life imprisonment. One could be charged with a crime for something as simple as writing a poem thanking Gaddafi for having given someone money or granted someone an interest-free bank loan to build a house, which was typical Gaddafi practice.

Under pressure from the “revolutionary brigades” the NTC appears to be implementing a policy of “winner takes all” with complete disregard to rebuilding the war-ravaged country. Such laws can only prolong the suffering of the Libyan people and lead the country towards possible disintegration. Above all, it mines the road ahead. If Libya has any chance of becoming a democratic and stable country, such policies make it more difficult than it was a year ago. The failure of leadership at the highest level is the crystal clear.