Libyan dialogue out of reach after parliament dismissed

The prospects of a dialogue to bring Libya’s two rival parliaments together have faded after a Tripoli court ruled the elected parliament in Tobruk unconstitutional. 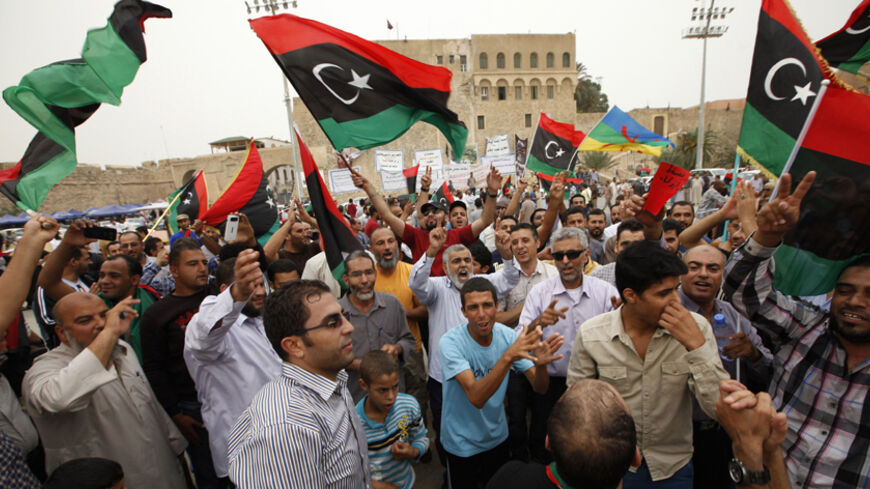 A Nov. 6 court ruling further intensified the already deep political crisis in Libya that has gripped the North African oil-rich nation since August, when a coalition of Islamist militias overran Tripoli. The verdict effectively annulled the country’s elected legislature, the Council of Representatives, the body recognized by the United Nations and the international community since its election in June. Unable to convene in either Tripoli or Benghazi for security reasons, the parliament moved to Tobruk in eastern Libya close to the Egyptian border. More than a dozen Islamist-leaning members boycotted the chamber and chose to challenge its legality.

This means the UN-brokered initiative to bring together parliamentarians and their boycotting colleagues for a compromise is dead. The initiative was launched in September by Bernardino Leon, the UN representative to Libya, with the hope of bringing the two sides together to reach some sort of compromise in which a coalition government could be set up until elections can be held. Hope has faded, and Libya's politics further complicated in the country plagued by factional fighting and well-armed militias that have recognized no central government after NATO-backed rebels toppled the regime of Moammar Gadhafi in October 2011.

The parliament in Tobruk was quick to react, refusing to recognize the ruling. “The ruling was made under the threat of guns,” according to parliament spokesman Farraj Hashem. Indeed, over the last couple of months, the Tobruk-based parliament has asserted that the capital is outside government control. Since taking control of Tripoli, the Islamist Dawn fighters have taken control of all government ministries and institutions, which calls into question the independence of the court itself.

In July, rebels from Misrata backed by Islamist groups formed Libya Dawn to capture Tripoli from pro-government Zintan militias backed by small regular army units. After nearly two months of fighting that brought the destruction of the capital’s airport and the displacement of thousands of civilians, the rebels prevailed and gained control of Tripoli in late August with help from Qatar. They immediately set up a rival government headed by Omar al-Hassi and revived the already dead and discredited General National Congress.

This has led to two governments and two parliaments in a country already divided along tribal and regional lines and suffering from a myriad of regional and international interventions, most of which have been counterproductive. Meanwhile, fierce fighting continues in Benghazi, where well-armed and entrenched Islamists, including the notorious Ansar al-Sharia, are fighting against forces of the Libyan army, which is backed by retired general Khalifa Hifter, who in May launched his own war against the Islamists controlling the city. At the time, Abdullah al-Thini’s government denounced Hifter as yet another militiaman fighting outside the government's control for his own objectives.

Further east, the city of Derna is under the control of a coalition of Ansar al-Sharia, which has declared its allegiance to the Islamic State, thereby adding another factor to the already complicated situation in the east.

Libya is now on the brink of full-scale civil war, and division of the country is a more realistic scenario than it was a year ago. If a compromise is not soon reached, the two de facto governments will become a reality, each administering whatever territory it holds on its own terms and each claiming legitimacy — a claim reinforced by the constitutional court’s ruling.

At the same time, terrorist groups in the east and south as well as foreign jihadists will only gain more ground as the chaos continues at the centers of power, and the two governments continue to quarrel over sometimes trivial constitutional texts whose legitimacy is also questioned. Leon now has a much more complicated task of bringing about some sort of settlement and peace to Libya now that the elected parliament in Tobruk has been declared illegal and all its decisions void because of a violation involving the election law.

The elected parliament has declared Libya Dawn a terrorist group, insisting on holding its leaders accountable before the law. In fact, UN Security Council Resolution 2174 adopted in August pushed for dialogue in Libya with the threat of sanctions against those who refuse to cooperate. Furthermore, the United States is threatening the targeted sanctions aimed primarily at Libya Dawn leaders.

It is difficult to see how the United Nations or any other body can bring about a political settlement to save Libya and its people. The UN in particular is responsible for what has transpired in the country, since it was the Security Council that approved foreign intervention in Libya three years ago, leading to its current state of chaos.