The International Criminal Court is investigating allegations and evidence that Mohammed al-Kani's militia carried out crimes against humanity. 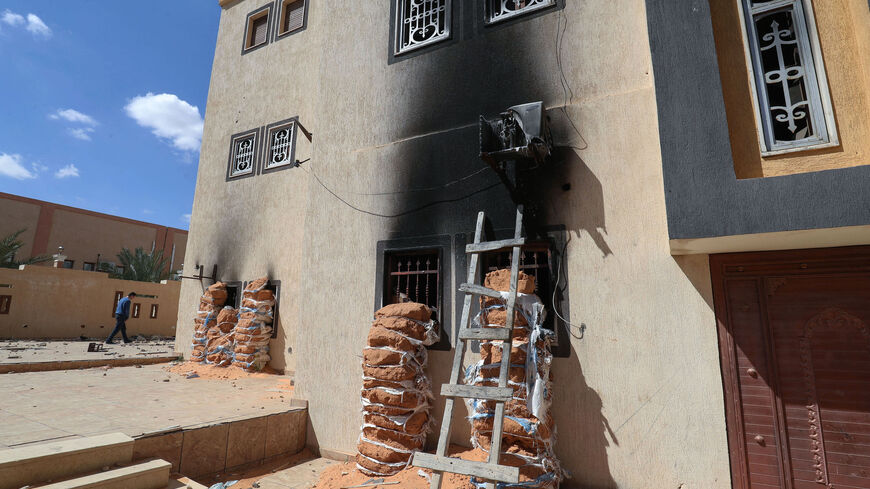 A damaged and abandoned villa complex of members of a Libyan family who commanded a militia that traumatized the town of Tarhouna is seen on March 26, 2021. The Kaniyat were a team of six brothers who traumatized Tarhouna, systematically eliminating those seen as opposing their militia — including killing the families. - MAHMUD TURKIA/AFP via Getty Images

The leader of Libya's notorious Kaniyat militia, who was sanctioned for alleged war crimes by the United States and European Union, died in a raid by security forces near Benghazi on Tuesday.

Mohammed al-Kani was killed at a farm outside of the eastern city of Benghazi, Libyan journalist Mahmoud al-Misrati reported.

One other person was reported killed in the raid and a third person arrested. A number of Kani’s associates were also detained in Benghazi, Tobruk and Ajdabiya, Misrati reported, citing a document from the civil and military prosecutors’ offices.

Kani’s militia previously sided with the UN-backed Government of National Accord in Tripoli before switching sides to join rogue warlord Khalifa Hifter’s surprise offensive against the western Libyan capital in 2019.

The Trump administration sanctioned him in November under the Global Magnitsky Act after accusations of torture, forced disappearances and mass executions came to light in and around the Libyan town of Tarhouna.

The town, which lies some 40 miles southeast of Tripoli, was under Kaniyat control for some five years before the militia withdrew as Turkey’s intervention on Tripoli’s side turned back Hifter’s offensive.

At least 100 bodies have been uncovered in some two dozen mass graves in and around Tarhouna. Locals have accused Kani’s men of forced disappearances and torture. Many of the unearthed bodies have shown signs of having been restrained and tortured. Women and children have also been found among the graves.

The International Criminal Court has investigated the crimes in cooperation with the Tripoli government. The court’s top prosecutor, Fatou Bensouda, has said the discoveries in Tarhouna may constitute crimes against humanity.

It was revealed last year that another Kaniyat leader, Kani’s brother Abdul Rahman, had sought medical treatment in Germany before returning to Libya.

A previous effort by the United States, the United Kingdom, Germany and Estonia to muster United Nations sanctions on Kaniyat leaders failed amid Russia's opposition last year. Russia backed Hifter’s offensive along with the United Arab Emirates and Egypt.

The previous US administration of President Donald Trump also offered tacit approval for Hifter's offensive before reversing course to push for a UN-backed cease-fire. The EU placed sanctions on Kani and other militia leaders in March.

Could Kani's death be part of the close of a grim subchapter in Libya’s decade of civil war?