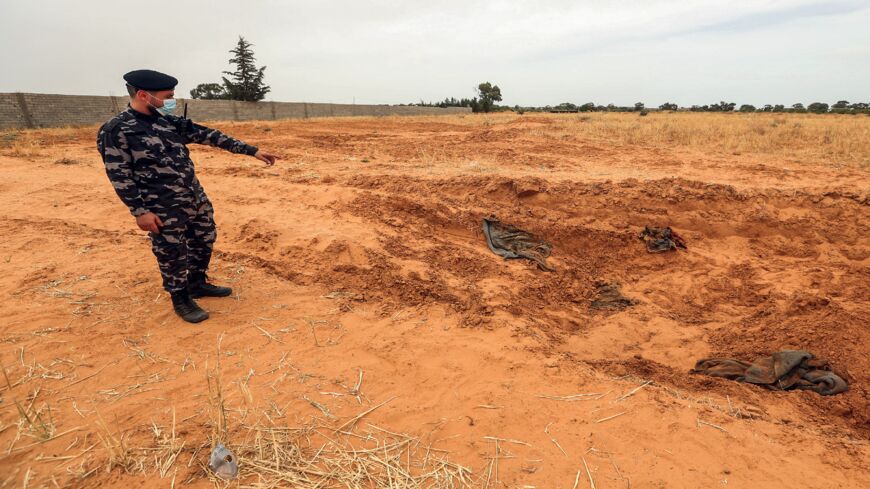 A member of security forces affiliated with the Libyan Government of National Accord's Interior Ministry points at the reported site of a mass grave in the town of Tarhuna, about 65 kilometers southeast of the capital, Tripoli, on June 11, 2020. The United Nations mission to Libya on June 11 voiced "horror" over the reported discovery of at least eight mass graves in an area evacuated this month by strongman Khalifa Hifter's forces. "UNSMIL notes with horror reports on the discovery of at least eight mass graves in past days, the majority of them in Tarhuna," the UN mission said in a statement on Twitter. - MAHMUD TURKIA/AFP via Getty Images

Libya’s Tripoli-based government issued arrest warrants for leaders of the country’s Kaniyat militia aligned with Gen. Khalifa Hifter’s forces after yet another mass grave was unearthed outside of Tripoli.

The remains of 12 people were discovered in Tarhuna, a city that for years was under the control of the Kaniyat militia, Reuters reported. Tripoli’s forces retook the area in July with military support from Turkey, amid Hifter’s wider retreat from his Tripoli offensive.

At least 100 bodies have been recovered so far, including from a field hospital in Tarhuna. Last week, a dozen bodies were found buried in the Mashrou Rabt district of Tarhuna.

Some of the bodies discovered so far show signs of abuse, restraint or violent desecration, according to local reports. The International Criminal Court (ICC) has called the findings potential evidence of war crimes.

The United Nations has offered support to the Tripoli-based Government of National Accord’s investigation into the killings.

At least some of the leaders of the Kaniyat militia are reportedly believed to be in eastern Libya. In September, Germany’s Tagesspiegel newspaper reported that Abdel Rahim al-Kani had received medical treatment in Bonn after being wounded. He reportedly then returned to Libya.

Kani and his militia, which aligned with Hifter’s forces in 2019, have long been accused of executing prisoners, including opponents, rivals and alleged criminals.

Tripoli’s Foreign Affairs Minister Mohamed Siala sent a letter in June calling on the UN Security Council to refer the evidence of the alleged war crimes to the ICC.

The continued grisly discoveries come as a cease-fire has set in between the country’s warring sides. On Tuesday, the UN Security Council ratified a cease-fire agreed to by Libya’s sides last week.

The agreement also called on all foreign forces to leave Libya within 90 days. The cease-fire declaration is scheduled to be enshrined in a UN resolution.

Representatives of the rival Tripoli and Tobruk-based governments will meet on Nov. 9 in Tunis for talks aimed at bridging Libya’s political divide.