At least 100 bodies have been discovered since the retreat of Khalifa Hifter's forces from the area earlier this year. 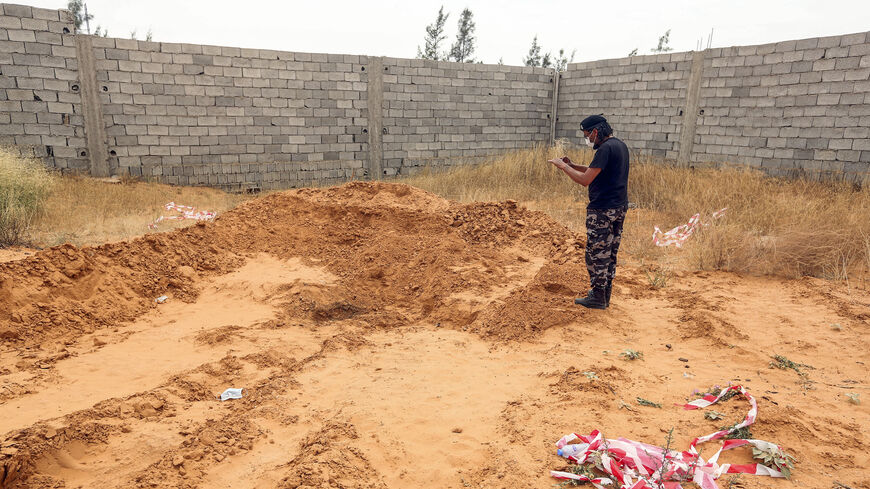 A member of security forces affiliated with the Libyan Government of National Accord's Interior Ministry takes a picture as he stands at the reported site of a mass grave in the town of Tarhuna, southeast of the capital Tripoli on June 11, 2020. - MAHMUD TURKIA/AFP via Getty Images

The remains of 12 people have been discovered in more mass graves near the Libyan city of Tarhuna, in an area occupied until recently by forces aligned with rogue leader Khalifa Hifter.

The discovery, in the Mashrou Rabt district of Tarhuna, is the latest grisly discovery in the area since the Kaniyat militia aligned with Hifter's forces was repelled from the area in May amid a counteroffensive by the Tripoli-based government.

So far, local reports have indicated that at least one hundred bodies have been discovered in collective graves in areas formerly under the control of Hifter’s forces around Tripoli.

Some of the bodies have reportedly shown signs of restraint and evidence of torture.

The International Criminal Court said earlier this summer the findings may be evidence of war crimes. The United Nations has pledged support for an investigation by the Tripoli-based government into the killings.

Under the control of the Kaniyat, Tarhuna served as a main supply line and staging ground for Hifter’s forces in his 14-month offensive against Tripoli, launched last April.

Turkish military support is seen as having helped turn back the warlord’s offensive, though Ankara’s deployment of Syrian mercenaries to the fight has also drawn condemnation.

The United States is backing UN efforts to to cement a cease-fire in Libya in hope of restarting the country’s political process to freeze the conflict along the Sirte-Jufra line amid a general stalemate.

Representatives of Libya’s Tobruk-based government, aligned with Hifter, met with Tripoli officials in Egypt earlier this month. Talks over the country’s political future are expected to continue in Egypt in the coming weeks.

Libya has been in a state of fractured civil war since a popular uprising backed by NATO air power overthrew long-time dictator Moammar Gadhafi in 2011.

Prospects that Hifter might take over the entire country are now slim, due to the failure of his Tripoli offensive this year.