The UN-backed government said the bodies were found blindfolded and with their wrists bound. 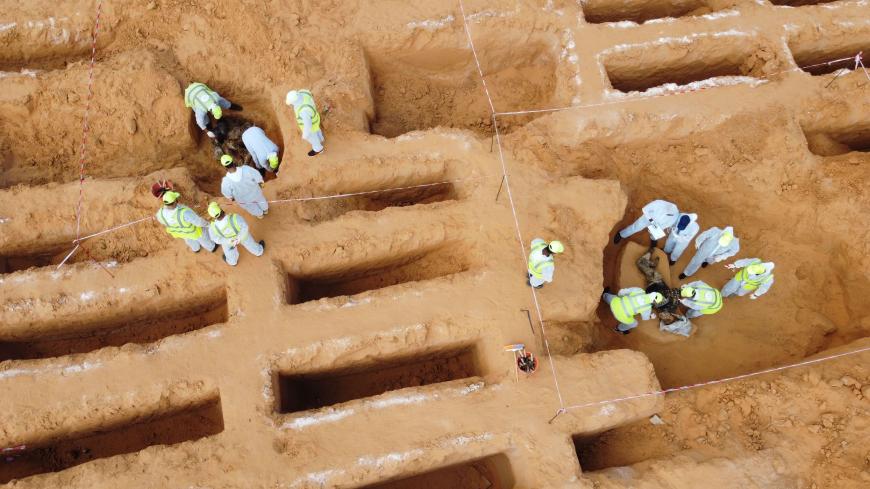 This picture taken Nov. 7, 2020, shows an aerial view of the search and identification efforts backed by the UN-recognized Government of National Accord, unearthing a mass grave site in western Libya's Tarhuna region. - MAHMUD TURKIA/AFP via Getty Images

“Three bodies were blindfolded and their wrists bound,” the Interior Ministry of the Government of National Accord (GNA) wrote in a Facebook post.

Hundreds of people have been reported missing since the Kaniyat militia took control of Tarhuna in 2015. Located some 57 miles (92 kilometers) southeast of Tripoli, the city was used as a strategic base for Gen. Khalifa Hifter’s forces during their 14-month offensive against the capital that ended in defeat this summer. The militia controlled Tarhuna until the GNA recaptured it in June.

The North African country is embroiled in a six-year-long civil war pitting the GNA against Hifter’s Libyan National Army (LNA), with each faction propped up by an array of foreign backers that have flooded the country with illegal arms and mercenaries. Hifter’s forces control much of the eastern part of the country with support from the United Arab Emirates, Egypt and Russia, and the Tripoli-based government enjoys the backing of Turkey and Qatar.

In a report published earlier this month, residents of Tahruna told the New York-based Human Rights Watch that the Hifter-affiliated group frequently abducted, tortured and killed its opponents. Since driving the Kaniyat militia out, the GNA has pledged to identify the bodies found in mass graves, some of which showed signs of abuse.

The United States sanctioned the Kaniyat militia and its leader, Mohamed al-Kani, in November, accusing them of torturing and killing civilians in a “cruel campaign of oppression.”

The discoveries come as Libya prepares to hold elections for a temporary executive government. The UN Support Mission in Libya announced Thursday that elections will be held in Switzerland next month to determine an interim authority before general elections are held in Libya later this year.

The GNA and LNA agreed to a permanent cease-fire during UN-mediated talks in October, giving the rival factions until this Saturday to expel their foreign fighters and mercenaries from Libyan territory. The outgoing acting UN special envoy for Libya, Stephanie Williams, said earlier this week that any outside powers whose fighters remain in violation of the truce are denying Libya of its sovereignty.