The US Treasury Department blacklisted the Kaniyat militia and Mohamed al-Kani over alleged human rights abuses. 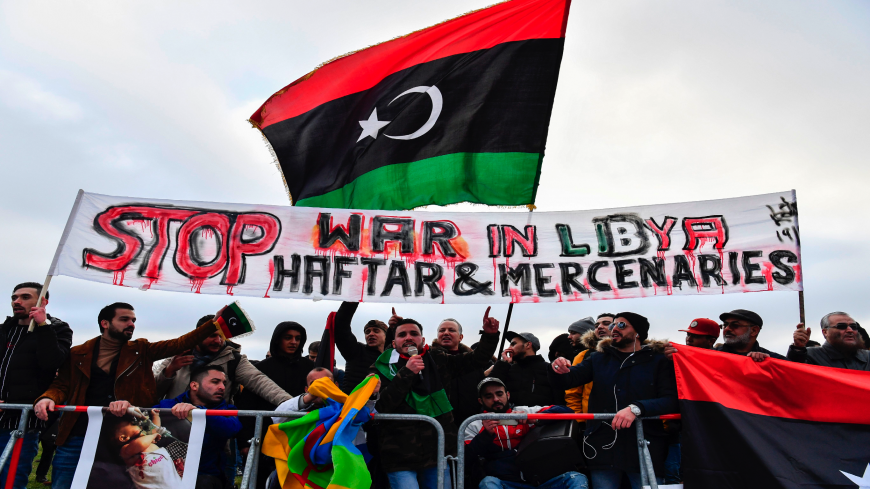 Protesters hold a banner reading "Stop war in Libya, [Hifter] and mercenaries" during a protest near the chancellery during the Peace summit on Libya at the Chancellery in Berlin on Jan. 19, 2020. - JOHN MACDOUGALL/AFP via Getty Images)

The United States on Wednesday imposed sanctions on a Libyan commander and his militia, which rights groups accuse of detaining, torturing and killing civilians in the war-wracked country.

The Treasury Department sanctioned the Kaniyat militia and its leader, Mohamed al-Kani, under the Global Magnitsky Act, which authorizes the US government to blacklist individuals who commit major human rights abuses or engage in corruption.

“Mohamed al-Kani and the Kaniyat militia have tortured and killed civilians during a cruel campaign of oppression in Libya,” Treasury Secretary Steven Mnuchin said in a statement. “The United States stands with the Libyan people and will use the tools and authorities at its disposal to target human rights abusers in Libya and across the world.”

The armed group, which is loyal to retired Libyan Gen. Khalifa Hifter’s self-styled Libyan National Army, had controlled the western city of Tarhuna until the internationally recognized Government of National Accord (GNA) recaptured it in June.

Government forces have since exhumed hundreds of bodies, including more than a dozen last weekend, in unmarked graves left behind when forces loyal to Hifter retreated from Tarhuna this summer. Some of the bodies appear to be women, children and elderly civilians who were tortured, burned or buried alive, Mnuchin said.

This month, the United States and Germany called for the UN Security Council to impose an asset freeze and travel ban on the Kaniyat militia over the group’s alleged summary executions and other rights abuses. The sanctions were blocked by veto-wielding member Russia, which backs Hifter’s forces in the civil war.

“Our support in the future is possible, but conditioned by the provision of an irrefutable evidence of their involvement in the killing of civilian populations,” a Russian diplomat told his Security Council colleagues in a note obtained by Reuters.

The North African country descended into chaos amid a 2011 uprising that overthrew and killed longtime dictator Moammar al-Gadhafi. The country is now ruled by two administrations, each supported by foreign backers who have flooded the country with illegal arms and mercenaries.

The GNA is backed by Turkey and Qatar, while Hifter enjoys support from Russia, the United Arab Emirates and Egypt. Following UN-facilitated talks in Geneva, the warring parties reached a “permanent” cease-fire last month, which called for foreign fighters and mercenaries to leave Libyan territory.