Human Rights Watch called on the Tripoli-based government to probe disappearances linked to the Kaniyat militia. 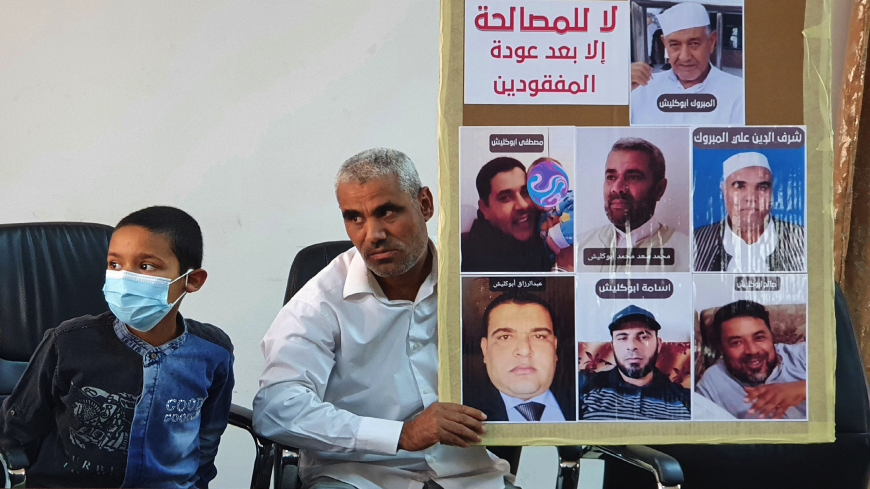 Families of missing persons gather at Tarhuna Municipality, southeast of the Libyan capital, Tripoli, urging authorities to expedite the DNA-based identification process on October 28, 2020. Libya's General Authority for the Search and Identification of Missing Persons reported yesterday that 12 unidentified bodies were recovered in the Rabt project area in Tarhuna. - MAHMUD TURKIA/AFP via Getty Images

More than 300 residents of the Libyan town of Tarhuna have been abducted or reported missing since the start of the country’s civil war, a prominent rights group said in a report Thursday that called on authorities in Tripoli to investigate the disappearances.

Since the Kaniyat militia took control of the western Libyan city of Tarhuna in 2015, at least 388 people have been reported missing. Family members who spoke with the New York-based Human Rights Watch all alleged that the Kaniyat armed group was behind the disappearances of their relatives.

Located some 57 miles southeast of Tripoli, Gen. Khalifa Hifter’s Libyan National Army (LNA) used Tarhuna as a staging ground for a 14-month offensive against the capital, which ended in defeat this summer. The Kaniyat militia, which is loyal to Hifter, had controlled Tarhuna until the internationally recognized Government of National Accord (GNA) recaptured it in June.

The North African country descended into chaos amid a 2011 uprising that overthrew and killed longtime dictator Moammar Gadhafi. The country is now ruled by two administrations, each supported by foreign backers who have flooded the country with illegal arms and mercenaries.

The Tripoli-based GNA says it has discovered 27 unmarked mass graves in Tarhuna. The bodies, some of which showed signs of abuse, have not yet been identified but are believed to be both civilians and GNA soldiers. Human Rights Watch called on the United Nations and foreign governments to provide forensic experts to assist in the GNA's gravesite investigations.

“Families in Tarhuna whose loved ones went missing face a difficult time moving forward with their lives,” said Hanan Salah, senior Libya researcher at Human Rights Watch. “The authorities should act on the grim discovery of mass graves by taking proper steps to identify the bodies and bringing those responsible for abuses to justice.”

In November, the Trump administration sanctioned the Kaniyat militia and its leader, Mohamed al-Kani, accusing them of torturing and killing civilians in a “cruel campaign of oppression.”