Hundreds of Iraqi activists have been abducted by unidentified forces trying to put an end to the ongoing protests. 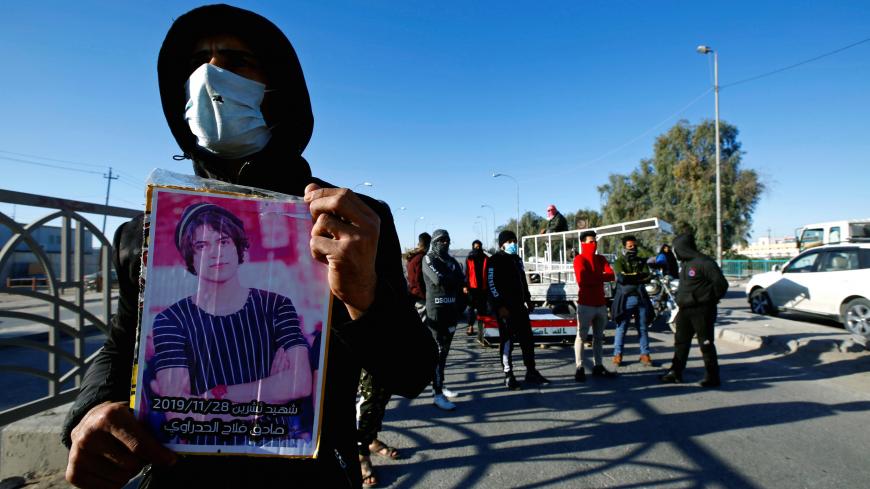 A man carries a picture of a demonstrator who was killed during ongoing anti-government protests, as other demonstrators block the street in Najaf, Iraq, Dec. 23, 2019. - REUTERS/Alaa al-Marjani

Iraq’s most senior Shiite cleric, Grand Ayatollah Ali al-Sistani, on Dec. 13 condemned the kidnappings of Iraqi activists and demonstrators in protest squares and stressed the need for weapons to be under the control of the Iraqi state.

A day earlier, the US Embassy in Baghdad had issued a statement condemning the kidnappings, and Amnesty International called on the Iraqi government to assume its responsibilities and take immediate and effective steps to stop the intimidation of activists.

“The US Embassy continues to receive disturbing accounts of citizens, demonstrators and activists being threatened, kidnapped or killed. These actions should not be tolerated, and the government of Iraq cannot allow these lawless criminal events to continue without action. We strongly condemn the use of violence and intimidation to hinder peaceful, lawful and just demonstrations,” the US Embassy said in a statement received by Al-Monitor.

On Dec. 11, Iraqi activists Omar al-Amiri and Salman al-Mansouri were kidnapped as they were leaving Tahrir Square, the main protest square, to go to the city of Kadhimiya north of Baghdad and buy tents for the protesters.

The kidnapping operations against protesters started in early October after protests broke out Oct. 1. One of the most significant kidnappings was that of activist Saba al-Mahdawi, who was kidnapped Nov. 4 and released 10 days later.

The kidnappings were not confined to prominent or well-known activists; for example, the administrator of the Clean Brothers Facebook page, Shuja al-Khafaji, was kidnapped in October and later released. The page had been promoting the protests and publishing news about them. On Dec. 7, 11 protesters were kidnapped in Karbala province while on a journey there from Baghdad. Seven were released within a week.

A report published at the beginning of December by the United Nations Assistance Mission in Iraq titled “Demonstrations in Iraq” said “men described as ‘militia’ abducted a civil society activist, held him incommunicado for two days, and subjected him to severe beatings and other forms of inhumane and cruel treatment. The victim had been previously arrested by the same militia, beaten and injured, and had attempted to lodge a complaint with authorities.”

The report, published on the mission's website, said, “Groups referred to as 'militia,' ‘unknown third parties,’ ‘armed entities,’ ‘outlaws’ and ‘spoilers’ are responsible for the deliberate killings and abductions of demonstrators.”

The High Commissioner for Human Rights in Iraq has registered at least 50 cases of kidnapping since that date, according to Anas al-Azzawi, a member of the Board of Commissioners.

Azzawi told Al-Monitor, “There are kidnapped activists who have been released, but they were ill-treated as they were assaulted physically. Some were released after they were forced to pledge not to return to the protest squares. While most of those released abstained from naming the kidnappers and did not recognize them or the parties behind them, they all said the kidnappers were armed and opposed to the demonstrations.”

He added, “A specialized committee has been formed under the leadership of the Ministry of Interior to follow up on the issue of kidnappings of civil activists and bloggers. Also, the commission documented the assassination of eight activists during the past two months.”

A video linked to here documents the moment lawyer and activist Ali Jasseb was kidnapped in Maysan in southeastern Iraq on Oct. 8. His whereabouts remain unknown despite civil society campaigns and calls on the kidnappers to reveal his fate. Jasseb's father has been visiting the protest squares in Maysan for more than 60 days now, as he holds his son’s photo and calls for his release on a daily basis.

Layan al-Qudsi, an Iraqi civil society activist, told Al-Monitor, “The targets are either ordinary activists, be they famous or not, or opinion-makers within the demonstrators. We have data whereby armed factions are behind these kidnappings.”

“The kidnappings have adversely affected the momentum of the protests, especially as far as women and families are concerned. They want to intimidate us and spread a state of anxiety and terror among us. Many activists have received threats in which they would be kidnapped if they do not abandon the squares, and when these activists overlooked such threats, they were indeed kidnapped,” he added.

None of the released activists have revealed details about their kidnappings to the media. This suggests they have been pressured into refraining from making any statements in this regard.

Iraqi authorities have also abstained from making statements about these groups.

While the intelligence services or the security directorate of the Popular Mobilization Units (PMU) are accused of such kidnappings, the PMU leadership has repeatedly denied such accusations and said it has not interferd with the protests and has nothing to do with the kidnappings.

Iraqi media outlets are reporting that black GMC cars are being used to carry out kidnappings. Although the Iraqi security forces are aware of this, given that they can follow these cars, no action has been taken against them.

Lynn Maalouf, Middle East director of research at Amnesty International, said in a report issued by the organization about the kidnappings in Iraq that “anyone voicing dissent in Iraq today faces interrogation at the point of a gun, death threats and enforced disappearance.”

With the escalation of protests, kidnappings are expected to further increase, especially with the absence of any government effort to determine the parties behind these operations. This comes at a time when the government is accused of collaborating with groups that are said to “control” state institutions.