Are Iraq's PMU militias planning to put an end to protests?

Following the funeral of the top Iranian commander of the Quds Force, Iraqi militias are preparing to clamp down on protesters. 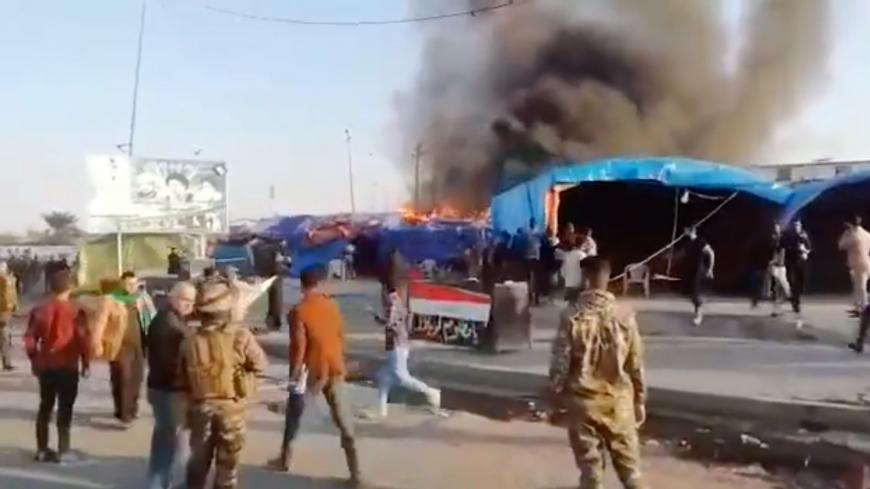 Iraq’s Popular Mobilization Units (PMU) have become involved in an open confrontation with the Iraqi protesters who have been demonstrating since Oct. 1 and calling for major reforms. Over the last three months, the PMU have been accused of participating in a crackdown on protests.

On Jan. 5, Dhi Qar province in southern Iraq witnessed the killing of two protesters who were among others protesting a symbolic funeral procession held by a group of armed men for the Islamic Revolutionary Guard Corps Quds Force Cmdr. Qasem Soleimani, who was assassinated at Baghdad International Airport Jan. 3.

“When we refused the gunmen [entrance to] the protest square, they threatened to open fire at us. They fired live bullets at us in the skirmish with the protesters,” a protester in Dhi Qar told Al-Monitor on condition of anonymity for fear of reprisal. In response to the shooting, as shown in video footage, the protesters burned the PMU headquarters in the province.

Dhi Qar incurred the most deaths in the war between the Islamic State and the PMU and Iraqi security forces. Also, the province had the biggest share of victims in the Camp Speicher massacre in June 2014, when IS killed 1,700 people.

On the same day of the armed attack against the protesters during the symbolic funeral for Soleimani, PMU supporters burned down protesters' tents in Basra province, in the south, for the same reasons.

A YouTube account that seems to belong to a PMU member or a supporter having a photo of Soleimani and Abu Mahdi al-Muhandis — a top PMU leader who was killed in the same drone strike as Soleimani — shared a video of the burning tents in Basra, saying it was punishment for “protesters who celebrated the death of the two men.”

“The protesters objected to the funeral procession of Soleimani and Muhandis, which prompted the Hezbollah Brigades to fire live bullets at them and burn down their tents, killing one man and wounding another,” Hussam al-Khamisi, a Basra activist told Al-Monitor.

Khamisi, who has been participating in Iraq's protests since 2015, believes the “PMU will further crack down on protests in the coming days.”

While the PMU have been widely accused of participating in the crackdown, a PMU source denied these claims in an interview with Al-Monitor.

Telegram channels close to the PMU have been sharing information within groups, which Al-Monitor was able to check, about the possibility of Iraqi protesters burning PMU headquarters in some provinces. This could portend some major open confrontations between the armed PMU and the protesters.

The demonstrators in Baghdad’s Tahrir Square said they were “innocent” of the attack on the US Embassy Dec. 31, which seemed to have provoked the PMU, which accused the protesters of betraying their homeland.

Liqaa Makki, a researcher at Al-Jazeera Center for Studies, told Al-Monitor, “What happened in Dhi Qar and Basra is an indication that the PMU are now ready to use their arms freely and without accountability, since there is no authority to deter them except for meager local influence.”

“The protesters are being accused of treason, which for the PMU is a valid excuse to attack them. I think the PMU will also take advantage of the tense situation with the United States to further suppress the protests,” Makki added.

The US statements on the protests in Iraq are provocative for the PMU factions that claim Washington orchestrates the ongoing demonstrations.

David Schenker, assistant secretary of Near Eastern Affairs at the US State Department, also implicated PMU leaders in the killing of Iraqi protesters.

Aqeel Abbas, an assistant professor at the American University of Sulaimaniyah, told Al-Monitor, “Some PMU leaders and members believe this would be the right time to squash the protests given the critical situation in the country. The protesters should hold their breath for a little longer to overcome this phase.”

“There is a real danger that the most radical PMU groups would seek to dismantle the demonstrations,” Abbas added.

A video showed a member of the coordination committee of the protests in Karbala province accusing PMU gunmen of harassing and killing protesters in the last two days of December, calling on demonstrators to ready their sticks and rods to repel any attacks.

It appears this is a favorable opportunity for the PMU to crush the ongoing protests, especially with the media blackout on the demonstrations after the attempt to storm the US Embassy and the death of Soleimani and Muhandis.

In sum, the accusations of treason against Iraq’s protesters since the outbreak of the demonstrations are likely to serve as a valid religious and political justification to suppress them. This is true despite the fact that some PMU leaders have previously stated the protests were “justifiable and understandable.”

Some radical PMU groups, however, are openly opposed to the protests, which have seen 600 protesters killed and nearly 22,000 wounded over the past three months.