Who's to blame for recent kidnappings in Iraq?

Many foreign diplomats and workers have been kidnapped in Iraq by armed gangs that have been spreading in the absence of security measures, which could damage diplomatic representation. 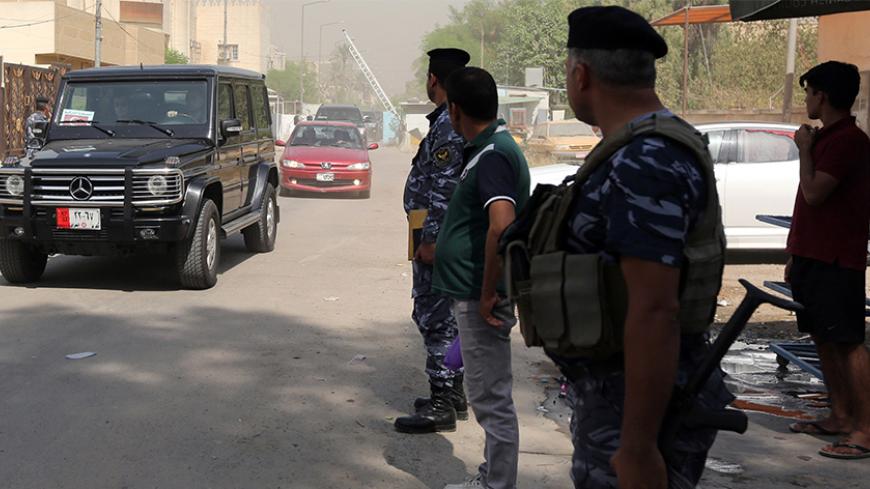 Iraqi security forces stand in front of Turkey's embassy upon the arrival of a vehicle carrying Turkish workers who had been kidnapped in Baghdad while working on a soccer stadium project, Sept. 30, 2015. - SABAH ARAR/AFP/Getty Images

BAGHDAD — Iraq is experiencing a resurgence in the abductions of foreigners, something that had tapered off in recent years. Three new incidents include the kidnappings of 18 Turkish workers in September, 26 Qatari hunters in December and three US citizens in January.

Following the US occupation of Iraq in April 2003, Iraq became a ripe environment for the kidnapping of Arab and foreign diplomats, as well as foreign laborers. In 2004, Egyptian and Iranian diplomats were kidnapped by unidentified militants and the Islamic Army in Iraq, respectively. Yet negotiations with the abducting groups led to their release. The same year saw the kidnapping of foreign workers whose companies were forced to leave Iraq because they received constant threats; one example is Turkish goods transfer company Atahan, which closed its doors after one of its workers was kidnapped.

Iraq was unable to protect its citizens and foreign laborers working on its territory.

Although abductions abated during the second term of former Prime Minister Nouri al-Maliki (2010-2014), suicide bombings continued as armed groups grew amid the Iraqi authorities’ failure to eliminate them. Kidnappings strongly re-emerged after the Islamic State (IS) took control of one-third of the country in June 2014.

In the recent kidnappings, the 18 Turkish workers in Baghdad were taken as they worked on building a sports facility east of the capital. A group known as the Death Squad claimed responsibility. The group had a clear political agenda: In a video released Sept. 11, the group called on Turkish President Recep Tayyip Erdogan to lift the siege imposed on two Shiite villages in northern Syria. The Death Squad is a Shiite group whose supporters have yet to be revealed.

On Sept. 27, the Death Squad announced that its demands had been met and released the Turkish workers three days later. The Turkish government did not reveal any details about its negotiations with the kidnappers.

Many people believed those strong condemnations would put an end to the kidnappings, given that the perpetrators were Shiite gunmen. However, that has not been the case. On Dec. 16, about 100 gunmen abducted 26 Qatari hunters who had been camping in the Muthanna province desert in southern Iraq. The fate of the Qataris is unknown, and no group has claimed responsibility for the operation.

Shortly following the Qataris' abduction, on Jan. 17 another armed group kidnapped three Americans from southern Baghdad. Since the Americans' kidnapping, Baghdad has tightened security. Security forces set up checkpoints and worked day and night, while the Iraqi police carried out house inspections in an attempt to find the kidnappers, to no avail.

Mohammed Karbouli, a member of the National Security and Defense Commission in the Iraqi parliament, believes that the ongoing abduction of foreigners in Iraq “could turn into a disaster.”

“If such operations do not stop, another disaster will be added to the disasters [already] plaguing Iraq, namely the war on IS and the economic crisis, and this disaster will affect the country’s diplomatic ties with other countries,” he told Al-Monitor.

Karbouli voiced concerns that some countries might cut ties with Iraq or reduce their diplomatic representation there because of the kidnappings.

Neither the army nor the police have developed “effective solutions to ensure the security of citizens, let alone the diplomatic missions,” he said, adding, “Armed gangs threaten the structure of the state.”

“We need an authority that can control gangs,” he said.

“We are seriously examining the Iranian threats against our diplomats in Baghdad," Jubeir said Jan. 3.

However, Ahmed Jamal, spokesman for the Iraqi Ministry of Foreign Affairs, denied that there is any threat to the Saudi Embassy in Baghdad.

“We are committed to the protection of diplomatic missions in Iraq in accordance with the norms of international law. We are also keen to develop bilateral relations with Saudi Arabia and Qatar, among other countries,” Jamal told Al-Monitor.

“There is no doubt that the taking of hostages in Iraq is regretful and condemned, and we, at the Ministry of Foreign Affairs, have announced our total rejection of the kidnapping of the Qatari tourists and three Americans,” he added.

Jamal said, “The abduction of foreigners in Iraq is growing and affecting relations with [those] countries.”

“We are trying hard not to let these incidents affect our relations with foreign countries such as the US and Qatar, among others,” he added.

Iraqi military strategist Hisham al-Hashimi told Al-Monitor that the increase in abductions is due “to the lack of security and military control imposed by security institutions to reduce the spread of arms and armed groups.”

Media reports have often accused the Popular Mobilization Units of being behind the kidnapping operations, which it denies.