As the one-year anniversary of the kidnapping of Bishops Yohanna Ibrahim and Boulos Yazigi in Aleppo approaches, questions persist regarding their fate and the identity of the kidnappers. 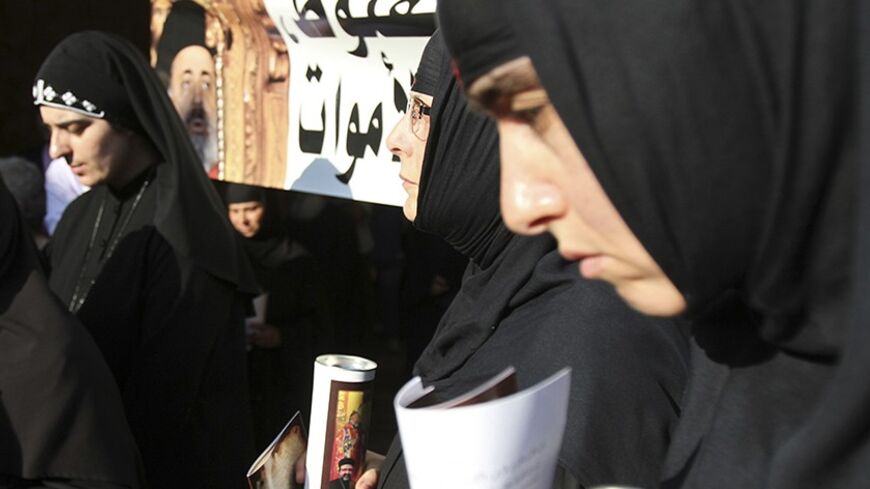 Nuns hold candles during a candle-lit vigil at the Balamand Monastery in Koura, near the north Lebanese city of Tripoli, to call for the release of bishops kidnapped in northern Syria, June 22, 2013. - TERS/Omar Ibrahim

April 22, 2014, falls two days after the “day of Resurrection” — that is, two days after the Easter holiday for the various Christian sects in Lebanon and Syria. However, another headline will be marking this day, namely the first anniversary of the kidnapping near Aleppo of Bishops Yohanna Ibrahim and Boulos Yazigi. April 22 will mark a tragic event. As the memory of this event lingers, the options on the fate of the two bishops are few.

Analyzing the available data on the kidnapping and comparing this to similar kidnappings inevitably raises the question of why there is no trace of the two kidnapped bishops. And why isn’t there any evidence that they are still alive? Why didn’t the kidnappers publicly claim responsibility for their operation or reveal their identity and issue their demands? Why didn’t they show a picture of them or allow us to hear their voices, to raise the bar of their demands in return for the two prominent kidnapped figures whom they captured a year ago?

For the sake of comparison, let’s look at a similar kidnapping operation that occurred near the same location, 11 months before the two bishops were abducted. A group of armed rebels in Azaz, near the border with Turkey, on May 22, 2012, kidnapped a number of Lebanese citizens returning from a pilgrimage in Iraq. The kidnapping soon turned out to be made on political and sectarian grounds, as the kidnapped belonged to the Shiite sect. This affiliation made the kidnappers accuse the Lebanese citizens of supporting Hezbollah, which backs the Syrian authorities in their fight against armed opposition groups.

However, in this case it was not long before the kidnappers disclosed their identity and revealed their demands. They even organized media-covered visits by the parents of the kidnapped. This public dealing with the kidnapping paved the way for political, security and financial approaches to the problem. The location of the kidnappers, the identities of the hostages and the identities of the kidnappers became known, which led to communications and negotiations between Lebanon, Syria, Turkey and Qatar. The negotiations culminated in the release of all the Lebanese detainees on Oct. 19, 2013, after two hostages had been released at an earlier stage.

Why wasn’t the issue of the bishops’ kidnapping dealt with in the same way? At first, there was a belief that since the two prisoners are bishops, and since one of them is the brother of the Greek Orthodox patriarch, the kidnappers fear revealing their identity or dealt with the situation in a reserved manner and worried about its impact.

This impression, however, soon faded away. On Dec. 3, 2013, a group of armed men belonging to the Sunni fundamentalist group Jabhat al-Nusra attacked a convent in the village of Maaloula in the Qalamoun area, northwest of Damascus. The group kidnapped 13 nuns and three assistants. The 16 prisoners were subsequently moved to another stronghold of the insurgents in the Yabrud area.

Here, too, as in the case of the kidnapped in Azaz, the kidnappers directly claimed responsibility for the kidnapping operation in the media and revealed the identity of their group, Jabhat al-Nusra.

The captors even allowed communications between various spiritual, political and security parties on the one hand, and the abducted nuns on the other. In this case also, negotiations started between Beirut, Damascus and Qatar, which eventually led to the release of the nuns on March 9 in the framework of a deal that reportedly included an exchange of detainees in the Syrian authorities’ prisons and the payment of a ransom. The kidnappers were keen to film the exchange and spread the video on social networking sites.

Thus, the question is if the fundamentalist kidnappers did not hesitate to announce that they were behind the abduction of the nuns from their convent and if they openly negotiated their release, then why haven’t the bishops' kidnappers taken the initiative to send a signal about the fate of the two men, and why haven’t they revealed their demands yet?

Based on the kidnappings in Azaz and Maaloula, the hypotheses about the persistent silence over the bishops’ disappearance seems limited to one of the following options: It is either that the bishops’ fate has taken on a tragic turn and that they are no longer alive, or that the kidnappers have a different organizational and ideological identity, different reasons and a different nationality from the two groups that kidnapped the Lebanese citizens in Azaz and the nuns in Maaloula.

The first option has been extensively discussed, and is supported by the following three arguments: the bishops were shot as soon as they were kidnapped; one of them is suffering from a serious health condition; or, their captors are hard-line extremists who do not accept the existence of other sects and did not hesitate to kill them.

On the other hand, the second option is supported by many reports according to which the kidnappers belong to an armed group from Chechnya. Therefore, the kidnappers cannot be accessed through the channels that have been adopted in the two cases of the Azaz and Maaloula kidnappings. Moreover, the means adopted for the liberation of the hostages in these two cases would be useless. Thus, neither Ankara nor Doha have any material or moral authority over the kidnappers. What further supports this option is Moscow's interference in an attempt to uncover the fate of the bishops. A Lebanese security official has even visited the Russian capital in this regard. Moreover, a Russian official church delegation visited Damascus a few weeks ago, to discuss the bishops’ kidnapping, which is on the list of Moscow's concerns.

Is the bishops' fate in the hands of Chechen kidnappers? This is one of the questions that remains one year after their abduction. During the past year, a number of hostages, including clerics, have been released. But a number of others have been killed. It keeps the case of the two kidnapped bishops swaying between anxiety and hope.