Fate of Maaloula nuns hangs over gathering of region's Christians

A conference in Harissa, north of Beirut, will discuss the dangers faced by the region’s Christians, especially as a result of the Syrian war. 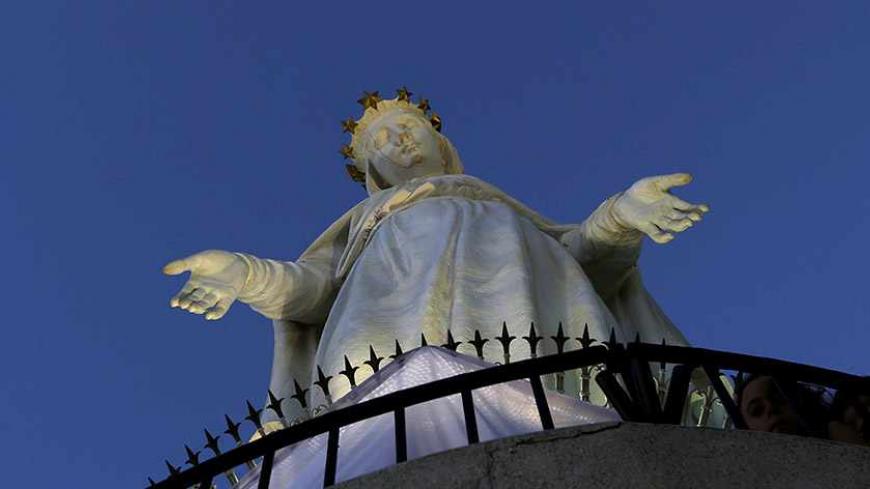 Faithful Christians pray at the monument of our Lady of Lebanon, Harisa, Lebanon, Aug. 18, 2012. - REUTERS/Jamal Saidi

Amid the positive and negative developments involving Lebanon these days, and the anticipation and anxiety surrounding the upcoming constitutional procedures — from forming a government to the presidential elections — a meeting of Christians will be held in Beirut to consider matters of equal urgency and importance.

The meeting, organized by the Christian Gathering-Beirut, is set to take place the third week in December at Our Lady of Lebanon, the famous Christian shrine in Harissa, northeast of the capital. The large gathering is expected to attract political party representatives as well as prominent and independent Christian political figures, among them members of the Free Patriotic Movement, led by Gen. Michel Aoun, head of the largest Christian ministerial and parliamentary bloc, and the Tashnag, which represents the overwhelming majority of Christian Armenians.

The Christian Gathering was launched on Sept. 2 and includes representatives from the major churches in Lebanon, among them a number of bishops, representing the heads of their churches. On Nov. 2-3, the organization held a Levantine conference in which delegates from Christian groups in Egypt, Iraq, Jordan, Palestine and Syria participated, in addition to Lebanese churches and Gathering members. An impressive array of Western diplomats also attended. The packed assembly, whose attendees heard news of the suffering of the region’s Christians and various testimonies, concluded by issuing a conference document and establishing a framework for the six countries represented.

The organizers told Al-Monitor that two issues are on the agenda of the upcoming meeting: attacks on Christians in Syria and the fears that jihadist terrorism will take hold in Lebanon with the possible targeting of Christian areas. There have, indeed, been worrying indicators in this latter regard.

Concerning the Syrian situation, attendees will be following up on the fate of the 12 nuns kidnapped Dec. 2 by a Sunni Muslim group from their monastery in Maaloula, northeast of Damascus. They are being held somewhere in Syria. The appearance of the abducted nuns on a video, broadcast on Al Jazeera, angered many Christians. Although the video demonstrated that the women were still alive, it was also clear that they were talking in the presence of their kidnappers. Their crosses had been removed, pointing to the kidnappers as jihadists and raising further concerns about the nuns’ ultimate fate.

Amer al-Qalamouni, spokesman for the General Committee for the Syrian Revolution, claimed that the nuns were being "hosted" to protect them from the shelling by regime forces near the monastery. Of course, not many believe this. When the nuns were kidnapped, there were news reports that the abductors wanted to exchange them for detainees in Syrian prisons. There has since been news of negotiations with the Vatican on this matter.

One news report said that the Lebanese president had tasked the director of the Lebanese General Security Directorate, Maj. Gen. Abbas Ibrahim, to visit Doha and negotiate the nuns’ release with Qatari officials, noting that the pretext of the victims being “hosted” had also been used when 11 Lebanese were kidnapped in Azaz in May 2012. They were “hosted” for more than 15 months, before being released in late October through Qatari mediation and pressure on Turkey, in the form of the kidnapping of two Turkish citizens in Beirut.

The hosts of the Christian Gathering conference noted that the nuns’ kidnapping was part of a series of incidents targeting Christians in Syria. Others include the kidnapping and killing of Father Fadi Haddad in October 2012, the beheading of the monk Francois Murad on July 1, the killing of the monk Paolo Dall'Oglio on Aug.15 (although he supported the armed rebels), the destruction of more than 43 monasteries and churches (according to church statistics), and the kidnapping of Bishops Boulos Yazigi and Youhanna Ibrahim on April 22 (whose fates remain unknown). The Christian Gathering will be looking at what can be done at various levels to ensure the release of the hostages and protect Christians and their holy places.

The second issue on the conference agenda is about the possible terror-related consequences of a claim on Dec. 10 by members of the Syrian armed opposition that armed elements belonging to Aoun are involved in the fighting in Syria. Aoun's camp denies the report.

The various Lebanese actors — the government, political parties and even Aoun’s rivals — know this allegation to be false, and some have questioned why such statements are being disseminated. Some see the allegation of Aoun's involvement as a pretext for future attacks against Christian areas in Lebanon, just as the Shiite areas in Lebanon have been subject to terrorist attacks in response to Hezbollah’s participation in the fighting in the Syrian regions bordering Lebanon. The possibility has raised everyone’s alarms, and official bodies have mobilized to counter such schemes.

By scheduling the Geneva II conference for Jan. 22, some feel that the Syrian crisis is nearing the beginning of its end. Until then, however, the violence and the bloodshed will continue, which scares the Christians who constitute a minority in both Syria and Lebanon.