Christians In the Levant Grow Fearful Over US Syria Strike

Christians in Syria and Lebanon congregate to discuss the implications for their community should the United States follow through with its plans to carry out military strikes on Syria. 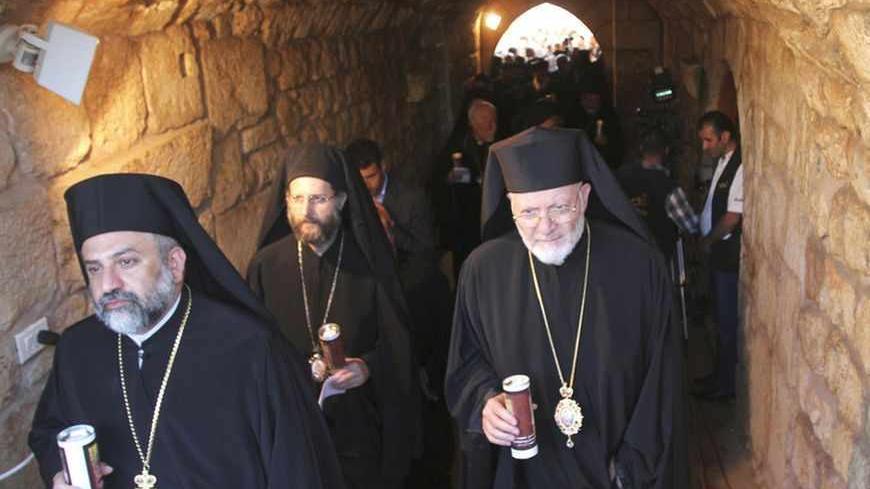 Christian clerics hold candles during a candlelit vigil at the Balamand Monastery in Koura, near the north Lebanese city of Tripoli, to call for the release of bishops kidnapped in northern Syria, June 22, 2013. - REUTERS/Omar Ibrahim

Voices were loud and tones were clear in the closed conference held Monday, Sept. 2, in a Christian monastery in Mount Lebanon, about 20 kilometers [12 miles] from Beirut. The participants included representatives of the 11 Christian churches in Lebanon, along with a number of Lebanese Christian intellectuals and politicians, including Al-Monitor’s correspondent.

The hottest topic was about the fate of Syria and Lebanon’s Christians in light of a potential US strike against Damascus. One of the participating bishops addressed his fellow bishops and others with a sharp tone, saying, “Hear my words and take notes; the US strike on Syria has no guaranteed results whatsoever, neither on the military level nor on the political level or any other. The only certain and inevitable result is that the launch of the first rocket on Syria by NATO will be the end of Christians in this country. They will either be slaughtered or displaced.”

The following series of positions expressed by the bishops were in favor of their colleague, opposed to US policy in particular and the West’s policy toward Syria in general. “It is the Iraqi experience all over again,” said another participating bishop. He explained: “Americans entered Iraq under the pretext of overthrowing Saddam Hussein and establishing democracy. Yet, their intervention led to absolute chaos, the emergence of the Islamic State of Iraq [group], endless Sunni-Shiite massacres, and most important, an almost total displacement of the Christians of Iraq.” The bishop, eagerly encouraging a peaceful solution in Syria, stated, “A few weeks ago, and in coordination with concerned Vatican circles, I headed to Europe with a delegation of Syrian and Lebanese Christians. We met with officials from the EU and the NATO leadership.”

The bishop said, trying to hide the agony in his voice, “We explained our situation and the inevitable dangers that lie ahead. Yet, we did not receive any response, not even any understanding of our tragedy. But we will never despair. We decided to convene all of the European churches to a conference in order to discuss our cause. Before the recent deterioration of the situation, in light of talks about the possibility of a US strike on Syria, we had set our mind to hold a conference in Cyprus in October 2013, with the participation of more than 200 representatives of European churches. Now, things have become even more complicated, more dangerous and more urgent.”

A third bishop participating in the same closed-door conference went further in his criticism of Western policies on Syria and its Christians. He said he now believes that the West indeed wants to displace the Christians of the East. He explained that whenever he talks about the tragedy of Syrian Christians facing the threats of jihadists, takfiris, al-Qaeda and Jabhat al-Nusra, as well as other Sunni radical forces supported by the West in Syria, the Western answer addresses the outcomes rather than the causes.

“A number of European officials have told us that the recent German experience is encouraging. Berlin has opened the door for around 5,000 displaced Syrian Christians,” the bishop revealed. He added, “The experience will be followed by other similar steps on the part of Austria, Denmark and other European countries.”

“What does this mean?” asked the bishop. “It means the displacement of a sect that includes more than 2 million people,” he answered.

This was not received as normal details of the Syrian war. After the news of the attack on Maaloula emerged on the evening of Wednesday, Sept. 4, all of the church officials Al-Monitor’s correspondent met with expressed anger as they tried to contain their tears.

The place is a veritable sanctuary for the Christians of Syria, Lebanon and the East. It is unique, for it is home to the last population in the world that still speaks the original language of Jesus of Nazareth, and they still teach this language to their children. The ancient Aramaic language is the treasure of Maaloula and its neighbor Saidnaya, another Syrian village threatened by Sunni jihadists.

When Al-Monitor’s correspondent visited Maaloula in 2008, one of the residents insisted on giving him the full names and addresses of his relatives who had emigrated to the United States, to confirm how Mel Gibson had asked them to correct the original language of Jesus in his famous movie The Passion of the Christ.

The Christian outcry regarding the potential US strike on Syria is growing louder and louder. On Friday, Sept. 6, a news conference was called in Beirut for all the Christian associations in Lebanon, in condemnation of what happened in Maaloula. On Saturday evening, worshippers from all the Christian churches will meet in the Basilica of Our Lady of Lebanon in Harissa in the center of Mount Lebanon to say a communal prayer for peace in Syria. The prayers will be led by the Maronite patriarch in participation of the apostolic nuncio, in observance of the appeal of Pope Francis I, who called upon all the faithful to join in a day of prayer and fasting on Sept. 7 for peace in Syria.

In addition, one of the Catholic bishops at the conference quoted an official in the Vatican as saying that Rome would not only call for this day and send a papal message to the G-20 summit, but would also have a stronger position calling for avoiding war in Syria.

“We will not accept dying or being killed in silence,” the bishop concluded, as he tightly held the cross hanging around his neck.