The fate of the two bishops kidnapped in Syria on April 22 is still unknown, but they are feared to have been abducted and killed by Chechen jihadists, according to a Lebanese official. 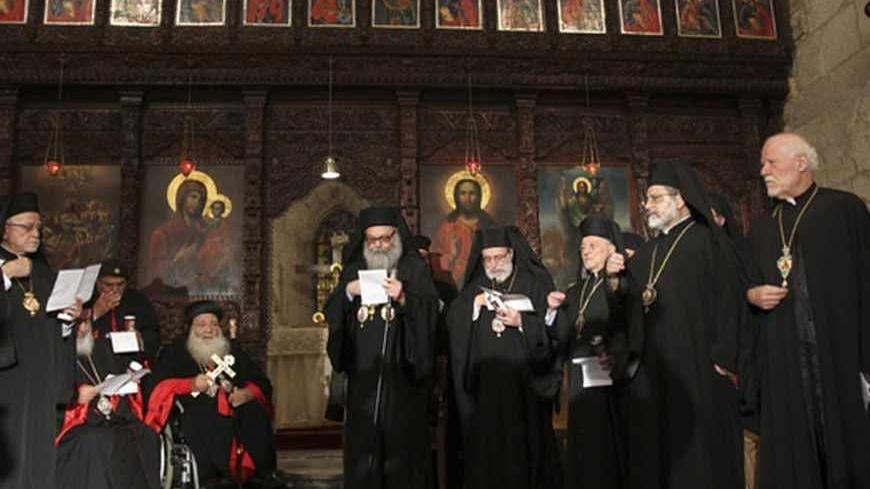 Greek Orthodox Patriarch John Yazigi (C) leads a prayer at the Balamand Monastery in Koura, near the north Lebanese city of Tripoli, to call for the release of bishops kidnapped in northern Syria in April, June 22, 2013. - REUTERS/Omar Ibrahim

A multitude of grim indications have surfaced about the tragic kidnapping of two bishops at the hands of armed factions in Syria. This most heinous of kidnappings in the ongoing Syrian conflict began on April 22, when news spread that gunmen near Aleppo had abducted the city’s Syriac Orthodox Bishop Yohanna Ibrahim and Boulos Yazigi, Aleppo’s Greek Orthodox bishop, who happens to be the brother of Greek Orthodox Patriarch Yohanna X Yazigi. Just hours after the incident, reports spread that the kidnappers were a group of armed Chechen jihadists.

Prominent Syrian opposition member Michel Kilo even wrote about the subject in the April 27 issue of the Lebanese newspaper As-Safir, claiming that the bishops were “released a little over a day after their abduction, only to be reapprehended by another faction, a few kilometers from the first faction’s location.” Since then, no traces or news of the bishops have surfaced. A Lebanese security official who visited Damascus a few days ago and is known to have close ties with Syrian authorities conveyed to Al-Monitor the pessimistic atmosphere in the Syrian capital about the fate of the bishops.

The same official explained that armed kidnappings in Syria have developed a well-known modus operandi among the Syrian officials in charge of looking into them. The goal of the first type of kidnapping is financial gain, whereby a rich businessman, or a man thought to be rich by his abductors, is kidnapped and his family is contacted with a ransom demanded for abductee's release. Negotiations start with a high amount that is subsequently reduced to a few thousand dollars following more serious negotiations. The ransom is then paid, the abductee is released, the kidnappers vanish and the case is closed.

Another type of kidnapping is supposedly politically motivated by narrow internal political considerations. An example is the kidnapping of 11 Lebanese men in the Azaz region, close to the Syrian-Turkish border. On May 22, 2012, a bus filled with Lebanese Shiites was making its way home following a pilgrimage to Shiite holy places in Iran, when anti-Syrian regime gunmen intercepted it inside Syria, only a few kilometers from the Turkish border. The gunmen seemed to know everything about the passengers on the bus, its trajectory and schedule. They allowed the women and children to go free and abducted only the men, publicly accusing them of being supporters of the Lebanese Hezbollah, an ally of Syrian President Bashar al-Assad.

In this type of “political kidnapping,” the abductors soon appeared in the open and through the media revealed their identities, names and “political” demands for the release of the hostages. Yet, this same incident was soon transformed, a few months later, into an armed abduction case — the likes of which have never been seen before in history, when the kidnappers allowed their victims’ family members, and some television outlets, to visit the hostages. For a few days thereafter, Lebanon became witness to a new innovative kind of reality television, its heroes being the kidnappers and hostages, with exciting episodes aired every day, accompanied by all the factors that make for the success of such programs. Some, afflicted by a form of Stockholm Syndrome, even began sympathizing with the kidnappers, while media outlets began competing for the best coverage. In short, this type of Syrian kidnapping is characterized by the fact that the perpetrators’ identities is known, and some measure of showboating is involved.

A third type of kidnapping that has prevailed during the Syrian war is more seriously politically motivated, much more secretive and discreet because of its external dimension. It is exemplified by the abduction of Iranian citizens at the hands of armed opposition factions. Despite accusations by the kidnappers that their victims were military experts or officials belonging to the Iranian Revolutionary Guards who were conducting military operations in Syria against the “rebels” — and amid official Iranian silence about the incidents most of the time — these recurring cases ended with the release of the hostages without fuss or media coverage, following the exchange of international diplomatic messages between Iran and the gunmen via Turkey.

After reviewing these different types of kidnapping incidents, the Lebanese official continued to relay what he heard in Damascus a few days ago — that the abduction of the bishops did not fall into any of the aforementioned categories. The kidnappers never addressed any messages to the families, or the churches of the two men, with the goal of receiving a ransom payment. Furthermore, they did not use the media to disseminate any messages, make demands or offer proof that they were holding the bishops, and that the men were still alive. In addition, for more than 100 days, the kidnappers did not send any messages via any diplomatic channels to any international entity that may be concerned about the bishops. In this context, the same official explained that rumors have spread in Syrian circles that the kidnappers were Chechens who abducted the Orthodox bishops to pressure the Russians into changing their pro-Syrian regime stance. Yet, official Syrian authorities, again according to the Lebanese source, are adamant that Moscow has not received any message or indication in that regard over the last 100 days.

Based on this analytical data, the Lebanese official relayed from his Syrian hosts their feeling that the two bishops met with an unfortunate end a few hours after their abduction. This scenario tends to fall in line with what the Syrian dissident Kilo said about the bishops being transferred from one jihadist faction to another.

The same Syrian authorities tend to believe that the media hype which followed the bishops’ abduction, and the pressure that may have belatedly reached the kidnappers, probably prevented the truth from coming out. All involved — including the actual kidnappers and the entities that sponsor or back them — preferred to remain silent and not leak a single word about the affair. By doing so, they wagered that time would make the issue disappear, and that everyone would forget about the whole matter. Syrian refugees, on the other hand, maintain that Sunni jihadists had slit the bishops’ throats, in keeping with Islamic Sharia’s provisions against “infidels.”

It should be noted here that some observers detected official Syrian hints to that possibility having occurred, when Bashar al-Jaafari, Damascus’ ambassador to the United Nations, uttered in his speech before the General Assembly on July 29 concerning the state of human rights in Syria an interesting sentence. For, among his inventory of what he called trespasses committed by the militants, Jaafari said that they had perpetrated crimes such as “the kidnapping and butchering of clerics, as well as the assassination of a religious scholar in his mosque.” If the allusion to “the assassination of a scholar in his mosque” is meant to indicate the terrorist bombing that occurred last March 21 in one of the mosques in Damascus, and led to the death of the pro-regime Sunni Sheikh Said al-Bouti, then his allusion to “the kidnapping and butchering of clerics” probably referred to the two Orthodox bishops. This would explain the level of discretion that dominates the actions of all concerned. The bishops’ families and churches are maintaining their silence in the hope that the two men are still alive. Meanwhile, the gunmen — regardless of their affiliation — also remain silent, to escape the ignominy associated with this heinous crime. A silence that is expected to endure for an extended period of time, as long as it remains the subject of contention between two highly polarized extremes.