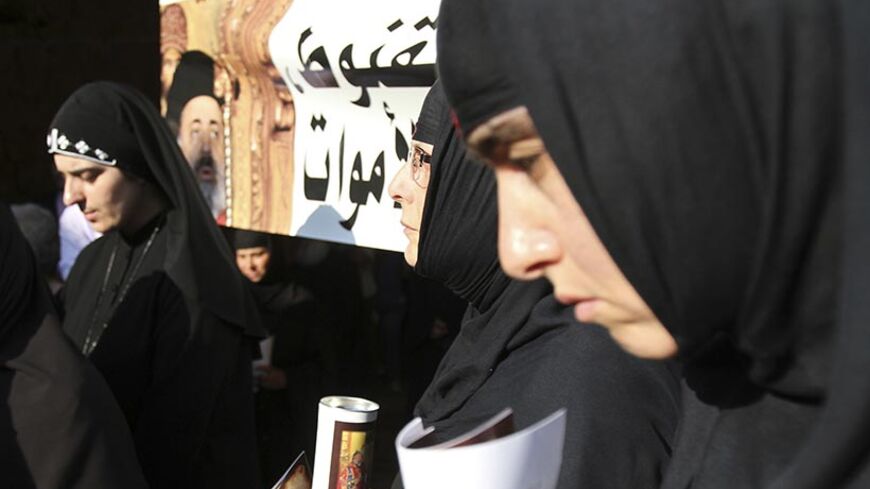 Nuns hold candles during a candle-lit vigil at the Balamand Monastery in Koura to call for the release of bishops kidnapped in northern Syria, June 22, 2013. - REUTERS/Omar Ibrahim

Qatari Foreign Minister Khalid al-Attiyah is reported to have told attendees at a Sept. 4 closed-door meeting in Doha that the information available to him indicated that two Orthodox bishops abducted in Syria in 2013 were still alive, despite rumors sometimes circulating to the contrary. The statement was told to Al-Monitor by a high-ranking official who attended Attiyah's meeting with a Lebanese delegation visiting Qatar to discuss the issue 500 days after the abduction of Bishop Boulos Yazigi of the Greek Orthodox Church of Aleppo and the Syrian Orthodox archbishop of Aleppo, Yohanna Ibrahim.

The two men were reportedly detained April 22, 2013, in Damascus by gunmen opposed to the regime of President Bashar al-Assad. Since that time, there have been contradictory reports about the clerics. None of the reporting on their fate or on the identity of their kidnappers has been confirmed.

The same source told Al-Monitor that although Attiyah appeared confident that the bishops remained alive, he did not seem optimistic that Qatar would be able to raise the matter with the relevant parties, because of the bishops’ movement in dangerous areas under the armed opposition’s control and, more significant, among more than one armed group.

After reports appeared that the clerics had been abducted by Chechen gunmen, the kidnappers reportedly handed them over to Jabhat al-Nusra, al-Qaeda's military wing in Syria. At that stage, Attiyah said, his country tried to mediate with the kidnappers for the bishops' release. During the same period, Doha engaged in other similar mediations, one of which led to the release of 11 Lebanese Shiites being held by gunmen in the Syrian town of Azaz, close to the Turkish border. Another Qatari mediation resulted in the release of nuns from the Maaloula monastery, northwest of Damascus, who were detained by Jabhat al-Nusra.

Attiyah told the delegation that his government had received reports suggesting that the bishops were recently held by Jabhat al-Nusra members, but they either handed the kidnapped bishops over to the Islamic State (IS) or the men themselves pledged allegiance to IS. This has caused contacts between Qatar and Jabhat al-Nusra to be interrupted and Doha's mediation for the mens' release frozen. Attiyah explained that his government does not have any contacts whatsoever with IS, unlike with Jabhat al-Nusra, with which it has open channels.

This was recently evident in the situation surrounding the Lebanese soldiers detained by the two groups in the barren lands of Arsal, in northeast Lebanon, where a Qatari mediator contacted Jabhat al-Nusra seeking the release of the soldiers in the absence of contacts with IS. Two of the soldiers have been beheaded by IS, which has threatened more decapitations if the Lebanese government does not meet its demands, notably, the release of nearly 400 Islamist inmates in Lebanese prisons on charges of terrorism.