Will Bishops Be Included in Deal To Release Lebanese Detainees?

New information suggests that a deal is near to secure the release of nine Lebanese citizens detained in Syria in March, but questions remain about two kidnapped bishops' fate. 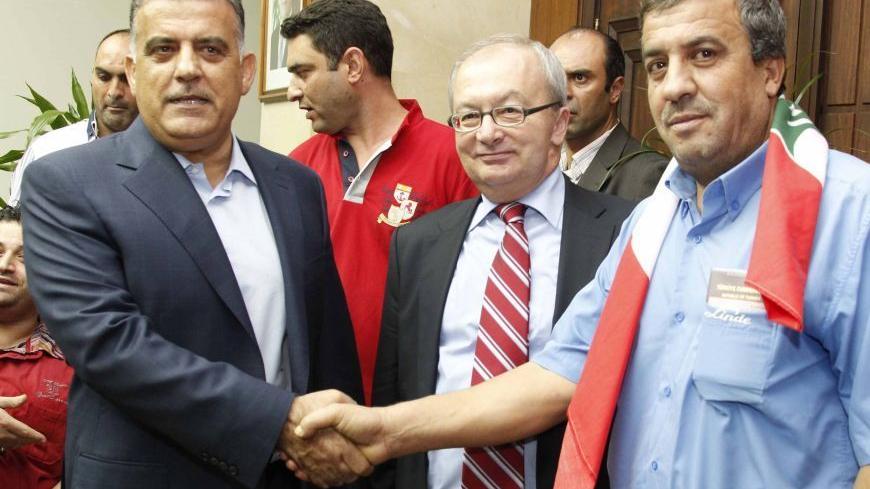 Will he be successful in hostage negotiations again? Abbas Ibrahim (L), head of Lebanese General Security, shakes hands on Sept. 13, 2012, with newly released Abdulbasit Aslan (R), a Turk who had been abducted by a Lebanese Shiite in Beirut. Looking on was Turkish Ambassador Inan Ozyildiz (C). - REUTERS/ Mohamed Azakir

A Lebanese minister confirmed to Al-Monitor that he has completely freed up his schedule for the next few days, and will keep his mobile phone at his side until the end of the Eid al-Adha holiday, which lasts from Oct. 15-17. He said he is waiting for a call from a Lebanese security official, who will tell him to take a plane to somewhere in Syria or Turkey to meet the Lebanese citizens who were kidnapped in Azaz and escort them back to Lebanon. Are his calculations true? What about the two bishops who were kidnapped [in Syria] as well? All indicators in Beirut point to the fact that the mediation carried out by the general director of Lebanese General Security, Maj. Gen. Abbas Ibrahim, to free the kidnapped citizens has succeeded, or is nearing success.

Ibrahim had launched a highly professional negotiation process for this purpose. These negotiations involved multiple parties and trips to a variety of capitals. He undertook a series of shuttle visits between Doha, Ankara, Damascus and even Berlin — amid complete secrecy regarding the details of his movements — which appears to have resulted in a fundamental breakthrough in the case of the kidnapped Lebanese citizens.

Informed sources in Beirut confirmed to Al-Monitor that the settlement of this issue — which has been ongoing for about 17 months — was based on the principle of a comprehensive deal. It was carried out according to a program that involved the following steps: First, releasing about 107 members of the Syrian opposition held in Syrian prisons. Second, the armed Syrian opposition will release the nine Lebanese citizens who were kidnapped in Azaz, along the Turkish-Syrian border, on March 22, 2012. Third, when the detained Lebanese arrive in Beirut, the two Turkish pilots who were kidnapped on Aug. 9, 2013, will be released. According to the sources, the unknown assailants who kidnapped the pilots announced their readiness to release them immediately after the Lebanese citizens are freed.

While all of the concerned parties are expecting the deal to be completed before the Eid al-Adha holiday — which carries much humanitarian significance, since it would allow the kidnapped Muslims to spend the holiday with their families at home — some in Beirut are questioning what allowed the deal to be carried out now, after several previous attempts failed.

Sources from the Lebanese government explained their reading of the issue to Al-Monitor. They said that the settlement is possible now as a result of several variables that were not present at previous stages. The first variable is the climate of a detente regarding the Syrian issue, following the "chemical weapons settlement" there, as well as the subsequent detente between Washington and Tehran. Likewise, there is talk of a comprehensive theoretical framework for a settlement between the West on one hand and Syria and Iran on the other. The second variable is represented by the difficult internal situation facing Turkish authorities, on multiple levels — politically, economically and even in terms of security. This is especially true given that the ruling Justice and Development Party (AKP), which is facing the negative consequences of this difficult situation, is preparing for elections in several months. The third variable involves Qatar's changing role in the Syrian war, after Saudi Arabia took sole control of managing the Syrian opposition following the resignation of Qatar's former emir and the Qatari foreign minister on June 25. Saudi Arabia's monopolization of this role, the traditional and historical sensitivities between Riyadh and Doha, and the previously referenced climate of detente seem to have led to Qatar becoming a contributing factor in the Syrian issue, and a player that can help solve the issue of the kidnapped Lebanese. There have been several indications in this regard. These include a Qatari message which was given to President Bashar al-Assad by a Palestinian official, Abbas Zaki, a few days ago [on Oct. 7]. This comes amid rumors that Qatar will cover all "financial costs" needed to carry out the deal to release the kidnapped Lebanese citizens.

However, the question remains: If these expectations are true, and the nine Lebanese citizens are released, what about the two Syrian bishops, Yohanna Ibrahim and Boulos Yazigi, who have been held by Syrian opposition militants since April 23? Official Lebanese sources told Al-Monitor that Maj. Gen. Ibrahim has been working from the beginning on including the issue of the bishops in the deal involving the nine kidnapped Lebanese citizens. He has been negotiating with all involved parities on this basis. The same sources revealed that some parties to the negotiations initially tried to avoid this, citing that the kidnapped bishops are Syrian and not Lebanese.. Ibrahim, however, rejected this approach.

Seeking to make his appeal on humanitarian grounds, and beyond national or sectarian loyalties, he instead claimed that the two bishops must be considered Lebanese citizens, given that they belong to two churches (the Syrian Orthodox and Greek Orthodox Churches) which have headquarters in Lebanon as well in Syria. Then, according to the same sources, those involved in negotiations for the kidnapped Lebanese tried to play on sectarian issues. They said that since the bishops are Christians, why should their fate be included in negotiations on the kidnapped Lebanese Shiites? Why doesn't a Christian party negotiate their release? But Ibrahim remained insistent, rejecting any hints of this kind. According to the sources, he stressed that the bishops must be considered a priority in any settlement. Thus, those involved in negotiations regarding the Lebanese citizens were joyous when information emerged confirming that the two bishops are still alive. Al-Monitor reported on this issue in a Sept. 26 article.

Does this mean that the deal to free the kidnapped Lebanese will be comprehensive? Lebanese government circles seemed hesitant to confirm this. Even if they were to confirm that the negotiations were comprehensive, there would remain questions about the timeline for a deal. In other words, would the bishops be freed at the same time as the Azaz detainees? After them? Or even before them? Yet Ibrahim's visit to the Maronite patriarch a few days ago — the first such visit amid negotiations to complete the deal — are a positive indicator in this direction. Especially in light of the satisfaction that visit produced within the church community in Lebanon.

Will it all be completed as everyone hopes? The Lebanese minister involved in the issue remains silent. But at the same time, he is constantly clutching his mobile phone, waiting for good news and the date of the journey of freedom.