Christians of the Levant Accuse France of Plotting to Displace Them

As the Syrian opposition becomes more and more Islamic, Christians of the Levant fear for their future and have accused France of plotting to displace them, writes Jean Aziz. 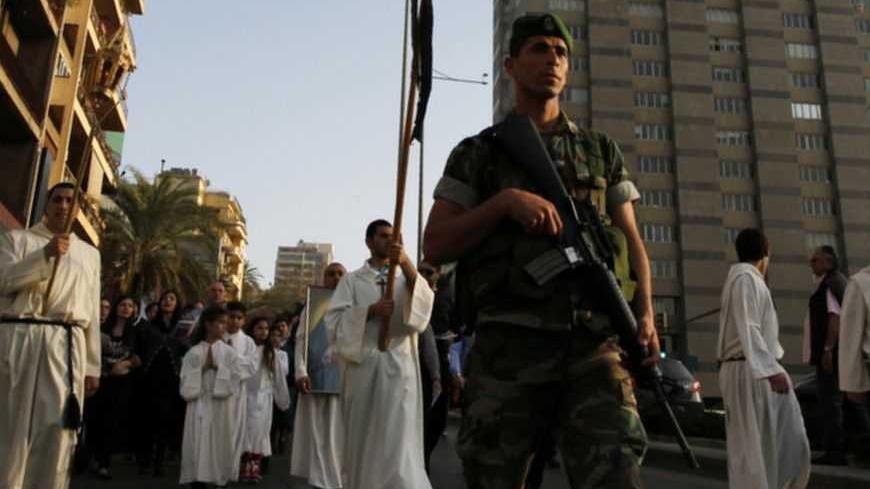 A Lebanese soldier keeps guard as Christian Maronite worshippers carry a mock coffin with Jesus Christ along a street during the Good Friday procession in Beirut, April 6, 2012. - REUTERS/Jamal Saidi

For decades, the Christians of the Levant held a belief that France — “the tender mother,” as it was called — served as their shield. Recently, many prominent Christian figures have raised their voices, accusing Paris and other European capitals of plotting to displace them from their homelands. What has caused such a turnaround and what are the bases of these accusations?

The roots of the protective relationship between France and the Christians of the Levant, particularly Lebanese and Syrian Christians, are deeply engraved in history. France’s role dates back to the era of the Crusades and has been documented throughout the ages. In 1249, the King Louis IX of France had taken it upon himself, through a signed deed, to protect the Maronites. Four centuries later, the king reiterated this undertaking in a letter sent to the Maronite Patriarch in 1649, announcing the safeguard of Maronites. He ordered the consulates and ambassadors of France to the Ottoman Empire to extend their hand to assist the Maronites and protect their interests.

This very same tradition continued throughout the years. In 1861, European countries exerted pressure on the Ottoman Empire to set a special administrative structure, known as the “Protocol of Mutasarrifate”, for minorities in Mount Lebanon. The capitals of the Old Continent were each assigned a minority faction to chaperon: London protected the Druze, Moscow took the Orthodox, Vienna handled the Catholics, while Paris was, naturally, in charge of the Maronites.

Christians, confident in France’s support, went to great lengths in creating myths about France’s sponsorship of the establishment of the state of Greater Lebanon in 1920, following World War I and the Treaty of Versailles. Throughout the centuries and decades, France — “the eldest daughter of the Church”, as the Vatican described it — maintained an unbroken cultural, educational, economic and humane communion with the Christians of Lebanon and Syria.

In parallel, the Christians were very cautious and suspicious of Washington. They did not trust the policies of the American administration in the region, and they had plenty of reasons not to. First of all, the Americans support Israel. Second was fear of the American’s support for the settlement of Palestinians in Lebanon, a significant concern to Lebanese in general and Christians in particular, especially since the number of Palestinians exceeds half a million, or 13% of Lebanon’s population. Thirdly, American officials tacitly supported the oil-rich dictatorships in the Gulf.

This lack of trust was fueled further by the rampant story about Dean Brown, the American special envoy who visited Lebanon in 1976 at the beginning of the civil war, offering Christian leaders collective Christian immigration to Canada. The story was not confirmed by any trusted source, while some studies refuted it outright. However, stories live on.

A few years ago, the Christians of Lebanon discovered for the first time — through an official biography titled "Chirac of Arabia" ("Chirac d’Arabie: Les mirages d’une politique francaise") — just how much former French President Jacques Chirac disdained them. Afterwards, when the civil war erupted in Syria in mid-2011, this intransigence was clearly displayed through the stance of his successor, former President Nicolas Sarkozy, who called for the toppling of Bashar al-Assad at any cost and by any means.

The United States, however, was reluctant and prudent regarding the calamities in Syria. At the same time, European analyses and studies were spreading, pointing to the issue of oil and gas in the Eastern Mediterranean Basin as the main motive behind the conflict over Syria and Lebanon. These analyses were further confirmed by a report aired on the French channel “Canal+” on Nov. 25, 2011, demonstrating, through facts and documents, how gas served as the main catalyst to the alliance between France and Qatar in Libya in 2011.

Amid escalating fears, the Maronite Patriarch Bechara al-Rai visited Paris in September 2011 and met with President Sarkozy. Speaking about Syria in his meeting at the Élysée Palace, Rai voiced the concerns and fears of Christians as follows: “We fear that events might lead to a sectarian division in Syria, a collective displacement of minorities or a drift towards extremism.” Those who accompanied Rai in his visit expressed that they did not sense any interest on the part of Sarkozy. At the same time, many political and media voices with close ties to Paris loudly accused Rai of defending Assad’s regime.

Simultaneously, calamities in Syria were beginning to  intensify, while the wave of extremism and religious targeting continued to increase. Many Christian figures were killed, in addition to a collective displacement of Christians in many regions of Homs, as Sister Anies Salib — a prioress at a convent in Homs — told the Lebanese media. AFP reported that Mohamed al-Sansawi, a leader of a Jihadist group in the Bab al-Hawa region near the Syrian-Turkish border, said that the aim of the revolution is “to establish an Islamic state in Syria and Lebanon, the home of casinos and prostitutes.”

France has tried to absorb this resentment. Late in 2011, French Prime Minister Francois Fillon assigned Sen. Adrian Gotiron, a member of the French Senate and head of the Lebanese-French Friendship Commission, to assess the situation of the Christians of the Levant. Gotiron commenced his mission by visiting the Vatican for consultations. However, many French experts described him as an “amateur” when it comes to foreign policies. It was said that his assignment was a mere cover-up of the real facts.

Amid widespread concerns, a slip of the tongue ignited more fears. Gotiron said in a speech on the background of his mission that “political and religious leaders are calling for the avoidance of collective displacement.” His statement prompted many questions: What exactly is required then? Individual displacement? Or a low-profile disguised displacement?

Alain Juppe, the French Minister of Foreign Affairs at the time, preceded Gotiron with a similar slip-up. On Oct. 11, 2011, he was asked during a cabinet discussion session before the National Assembly about the conditions of Copts, to which he replied: “We were not content with words and speeches, we welcomed all those who were the victims of threats, violent acts and terrorism. The same was done in Iraq, as we brought 1,300 Iraqi Christians to France as a part of an inclusive program.”

These two stances were enough to raise concern among the Christians of Lebanon and Syria. Many figures accused Paris and other European capitals of plotting to displace Christians in exchange for oil, gas and preserving France’s interest in Doha and Riyadh. Juppe tried to refute this argument in an article published in a Lebanese newspaper on March 1, 2012, in which he addressed the Christians of the Levant, yet failed to put out the fire.

As events escalated in Syria, the Christian voices rang out even louder. Lebanese media outlets reported on Jan. 20, 2012, that Valery Alexeev, the president of the Institute for Orthodox Peoples’ Unity was taken by surprise when he learned of Paris’ stance. During his visit to many western countries to examine their opinions about the situation of Christians in the Levant, France expressed that “it is important to encourage the Christians of the Levant to immigrate to Europe.” According to the same sources, Alexeev and Patriarch Kirill I of Moscow communicated to Lebanese religious leaders during their visit to Lebanon that “a western plan is set to displace Christians.”

A week later, Pastor Ibrahim Nseir — head of the Anglican Church in Aleppo — denounced the “French speeches which encourage the displacement of Christians from Syria.”  Nseir reported that a French official said that “the number of Christians in the region is not enormous; European countries are capable of taking them in.” In the same context, Nseir said that “Germany expressed its ability to receive 20,000 Christian families; a plan to displace Christians from this region is being carried out.”

Christians held in high-esteem the statement made by Hillary Clinton on July 30, 2012, at the Carnegie Endowment. She noted, “The Christians of Syria are filled with concern over their future. They feel like they are really going to be at risk regardless of what developments come about.”

Are these concerns simply unfounded? Waiting for the confirmation of these fears may drag out blood baths and mass exterminations.