Various versions of a recent hostage deal are circulating that include, potentially, political motivations, millions of dollars in ransom, exchanged military prisoners and relocated civilians. 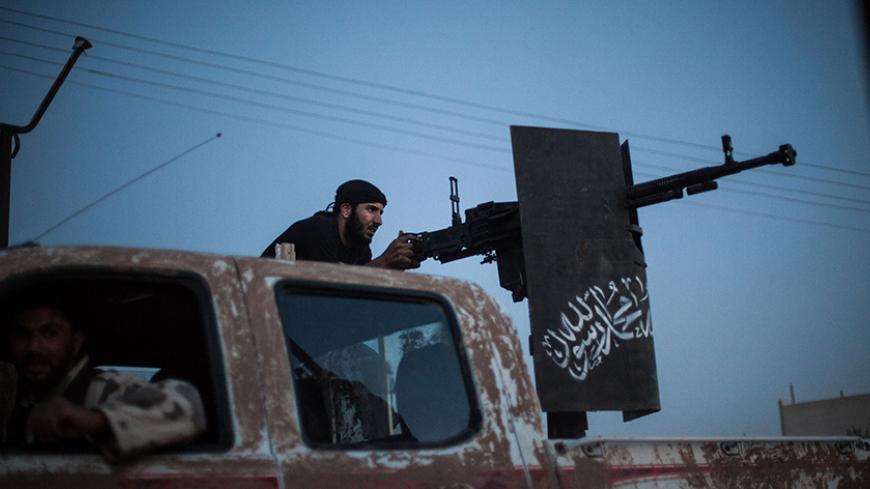 A member of the Islamist Syrian opposition group Ahrar al-Sham fires against a position of the People's Protection Units (YPG), a militia set up to protect Kurdish areas in Syria from opposing forces, during clashes in Raqqa province, Syria, Aug. 25, 2013. - ALICE Martins/AFP/Getty Images

BAGHDAD — The 26 members of a kidnapped hunting party that included numerous members of the Qatari royal family and two Saudi nationals have been released after being held for 16 months in Iraq, but questions remain about how that release was negotiated.

While the details of the deal haven't been revealed, the entire case raises serious concern among Iraqis that their government might be losing more control over its territory, as it appears regional deals are being concluded involving Iraqi territory under the auspices of other countries, without the government’s full supervision.

However, Interior Ministry spokesman Wahab al-Tai told Al-Monitor that Iraq was "the only and exclusive authority handling this case with Qatar." Regarding the government’s role in this operation, Tai said that “the idea of a political deal in this case is not true at all."

"This was a blackmail plot by organized crime gangs seeking to obtain money. The kidnappers demanded a ransom of $700 million, but the official security services under the guidance of the government thwarted the attempt,” he said.

But The Associated Press cited an undisclosed source involved in negotiations who said Qatar paid tens of millions of dollars to Shiite groups and the al-Qaeda-linked, Islamist group Ahrar al-Sham. The Guardian reported April 21 that the hostages' release also involved hundreds of prisoners being freed from Syrian jails.

A Qatari delegation in Baghdad conducted negotiations April 18 that included the exchange of Iranian fighters and members of Lebanon's Hezbollah in Syria, held by Sunni combat groups in Syria. The AP source also said Iran and Hezbollah were involved in the negotiations.

“This is politically possible and accepted,” Jasim Mohammed Jaafar, a leader of the State of Law Coalition in Iraq, told Al-Monitor. “The impact of Iran and Lebanese Hezbollah on the Shiite factions in Iraq, and the relationship between Qatar and armed groups in Syria, paved the way for such a deal.”

Jaafar also said that “there was a major Qatari attempt through the influential political parties in force in Iraq, in coordination with Iran, to release these hunters.”

Though he refused to name it, he asserted that the kidnapping party was an Iraqi armed faction, not a terrorist organization. He said the objective behind the kidnapping was purely political and came in response to Qatar's role in Iraq and Syria supporting armed groups. In a Feb. 2 article, Al-Monitor reported that Sunni parties accused militias of abducting the hunters “for political purposes.”

However, the deal would have even larger regional dimensions if, as claimed by a well-informed Lebanese source who spoke with Asharq Al-Awsat newspaper, the deal involved an understanding between Iran and its supporting forces in Syria on the one hand, and on the other hand, Hayat Tahrir al-Sham, an extremist armed faction influenced by Qatar. Under this scenario, the source said, Qatar committed to open a channel of communication between Washington and Jabhat Fatah al-Sham, which the United States considers a terrorist organization.

Syrian opposition member Samir Nashar mentioned involvement of an Iraqi paramilitary group. In a press statement to Asharq Al-Awsat — a statement removed a day after it was posted on the paper's website for unknown reasons — Nashar said, “The Iraqi Hezbollah al-Nujaba movement, which has a number of fighters in Syria, agreed to release the kidnapped hunters under a deal to clear [the] four Syrian towns.”

Abu Warith al-Musawi, a leading figure in Hezbollah al-Nujaba, denied any role by the movement in the kidnapping.

“We are part of the military system and the information contained in the article by the Asharq Al-Awsat newspaper is not true. We have nothing to do with any deal and we will sue the newspaper for publishing such false news,” he told Al-Monitor.

The Popular Mobilization Units (PMU) also denied involvement. Ahmed al-Asadi, spokesman for the predominantly Shiite group, told Al-Monitor, “The PMU has nothing to do with the kidnapping, especially as [the PMU] is part of the Iraqi security system. The mere mention of the PMU’s name in relation to this case is an attempt to tarnish its reputation.”

He added that the Iraqi Interior Ministry and its security institutions, along with the government, coordinated the Qatari hunters' release. Further, he said, the PMU rejects such operations and views them as harmful to Iraq's reputation.

The Qataris were legally hunting in the wilds of Iraq, which are known for ecological diversity and are home to various species of animals and birds, especially falcons, which attract hunters from Qatar, Saudi Arabia and Kuwait.

These hunters kept visiting Iraq despite deteriorated security conditions and the presence of the Islamic State, which occupied the city of Mosul and areas in Salahuddin province north of Baghdad in June 2014, as well as the presence of several armed groups living off kidnapping operations.