With the Islamic State nearly defeated in Iraqi cities, disputes between PMU-affiliated Shiite factions and the Iraqi government have surfaced, threatening future military clashes between them. 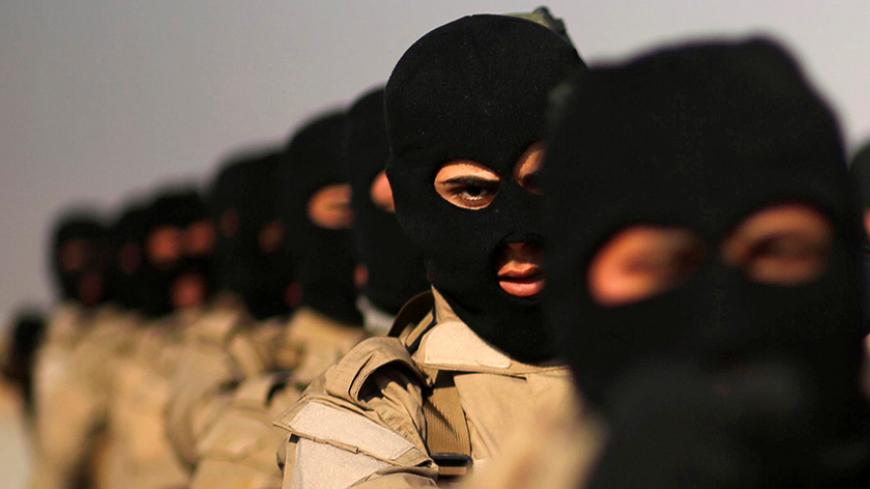 With Iraqi forces close to achieving military victory against the Islamic State (IS) in its main Mosul strongholds, some heated disputes have arisen among Shiite factions bent on preserving their independence and large scope of involvement in security and political matters not only in Iraq but in the region. Several political parties have called for disbanding these forces and incorporating them into the official armed forces, because keeping the Popular Mobilization Units (PMU) as a shadow force for the other Iraqi military forces would strengthen the PMU’s national and regional systemic role. Will these disputes turn into a military clash pitting the Shiite factions against the Iraqi government?

In a recent development in the dispute between the Iraqi government and PMU factions, Al-Hayat newspaper reported April 21 that some PMU factions — in collaboration with Lebanon’s Hezbollah — concluded a deal with the Qatari government under which Qatari hunters were freed in return for a ransom and Qatar’s pledge to pressure the Syrian opposition to lift the siege imposed on Shiite villages in Syria. This is regarded as a flagrant infringement on Iraq’s sovereignty. The hunters, some of whom are members of the Qatari ruling family, were abducted in southern Iraq by PMU-affiliated forces. Although some PMU-affiliated factions, such as Kata'ib Hezbollah and the Abu al-Fadl al-Abbas Brigade, were held responsible for the operation, the true affiliation of the kidnappers is yet to be confirmed.

In an angry response, Iraqi Prime Minister Haider al-Abadi on April 18 slammed the hunters' abduction, describing it as "a violation against all Iraqis.” He said, “This is a crime and an offense against all Iraqi citizens since [the hunters] were Iraq’s guests and obtained official entry permits from the [Iraqi] Interior Ministry.”

Abadi has criticized on many occasions what he called outlaws, stressing that they reject the Iraqi government’s authority. In his answer to a question about the future of the PMU, Abadi told the United States Institute of Peace on March 20, “There are volunteers in the PMU offering their lives. … But of course, there are others motivated by something else, probably by their ambition to take control and gain power. I know some have committed crimes such as armed robberies and kidnapping, and we are confronting them. We have a law and we will apply military law and accountability on those [PMU] fighters. Whoever is outside that will be considered an outlaw.”

However, the reality on the ground reveals the government’s inability to control rogue factions at this stage. This has been proven by the Iraqi government’s inability to release the Qatari hostages, knowing that the kidnappers can negotiate with several foreign countries and conclude deals with regional ones. Shiite armed factions have long been accused of crimes against civilians, especially in the areas recaptured from IS, with the Iraqi government failing to control them. This has reached the point where Muqtada al-Sadr, the leader of an armed faction within the PMU, called those unruly factions “insolent militias.”

PMU fighters have themselves been the target of criminal operations on some occasions. On March 4, Ahmad al-Jayerli, the commander of the Special Forces Regiment within the PMU’s 16th Turkmen Brigades, and four of his guards were kidnapped in Baghdad. The incident is one episode of the internal conflict between these factions. This led the residents from Tuz Khormato to block the Kirkuk-Baghdad road in protest March 4 and threaten the central government with a rebellion if their leaders were not released.

One of the protesters said, “The man [Jayerli] kidnapped was wounded while guarding a barricade [fighting IS] and he has not yet been recovered. Is this how good is repaid? Is this how a man who wants to stay clean is repaid?” As for the kidnappers, the protester implicitly blamed PMU factions for the kidnapping, saying, “Our leaders know the kidnappers. The PMU northern front leader knows them, the leader of the Badr Organization’s military wing knows them and Saraya al-Salam’s leader knows them.” Jayerli was later released without any official comments from the Iraqi government or the PMU.

The post-IS era will be critical as Abadi is trying to steer PMU factions away from politics in order to impose government control on them. However, some powerful parties within the PMU have publicly rejected these attempts. For instance, the secretary-general of Asaib Ahl al-Haq, Qais al-Khazali, in a clear challenge to the PMU law, has recently stepped up his political activities ahead of the upcoming elections. He has stressed the PMU’s involvement in politics.

These actions, particularly criminal ones, increase the probability of military clashes between government forces and PMU factions defying the government’s orders and laws. These clashes would likely erupt after ending IS’ military presence in all Iraqi cities and regions since, at this stage, Iraqi forces are engaged in fierce fights against IS. The Iraqi government has been through a similar experience during the period of occupation when open clashes broke out between government forces and Shiite factions who controlled vital areas and institutions in the country. Back then, the US military presence helped stifle these militias.

However, amid the ongoing fragmentation underlying the Iraqi government, the government seems unable to fully exert control over these forces in the foreseeable future, not to mention that it remains powerless to seize the tribes’ arms. That said, these armed groups’ Iranian affiliation and support will empower them to challenge the Iraqi government and advance their pro-Iran agenda.