Illegal hunting activities in Iraq are causing serious threats to the environment, while the law is not enforced and the government condones the practice by Iraqi and Gulf state hunters. 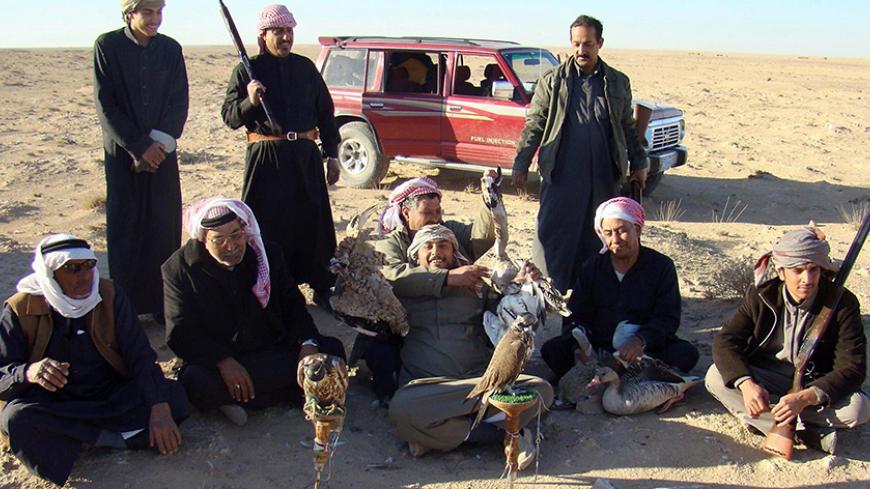 Hunters from the Gulf pose with their birds of prey prior to a hunt in the Anbar desert of western Iraq, Jan. 6, 2009. - AZHAR SHALLAL/AFP/Getty Images

NASIRIYAH, Iraq — The abduction of 26 Qatari hunters, including members of the ruling family, by a Shiite armed group — which demanded a $1 million ransom for their release, according to the London-based Asharq al-Awsat daily — in the desert of Iraq's southern Muthanna province on Dec. 16, 2015, is still being handled by politicians and the media.

Sunni parties, including Mohammed Karbouli, a member of the National Security and Defense Commission in the Iraqi parliament, told Russia Today on Jan. 15 that militias, which he did not name, abducted the hunters for political purposes.

The abduction has shed light on the Iraqi desert and wilderness, which is a popular refuge that not only attracts many types of birds but also hunters. Hunting has turned from a hobby into a career path that generates money for hunters and merchants alike; the trapped birds are sold in local markets or smuggled to Arab Gulf countries.

Many parts of Iraq are known for their biodiversity, and especially falcons are popular prey for Iraqi hunters and those from the Gulf states. The latter are continuing to make hunting trips to Iraq despite the deteriorating security situation in regard to the presence of the Islamic State in Mosul and parts of Salahuddin province, and other armed groups. It seems that their lust for adventure and money is greater than their fear.

Hatem al-Hashemi, a hunter from Najaf, told Al-Monitor that the interest in hunting in Iraq by Qatari, Saudi and Kuwaiti hunters is nothing new, and that in 2013, he “accompanied Kuwaiti hunters who arrived in Iraq during the hunting season, which runs from the end of August until the end of October.” Hashemi recalled that prior to 2003, foreign hunters did not make hunting trips to Iraq under Saddam Hussein's rule because of strict security measures.

He added that these Shiite Kuwaiti hunters “spent almost the entire month of September in Iraq, where they visited the holy shrines in Karbala and Najaf before going on falcon hunts.”

Law No. 57 of 1938 bans the practice of hunting without a license, while environmental protection regulations set out in the Wildlife Protection Law Act (Law No. 17 of 2010) prohibit the hunting of rare and endangered birds and wild animals, most notably the Saker falcon.

In this context, Hashemi said, “Gulf hunters return to their country of origin carrying falcons and prey, without abiding to the laws that are in force.”

This was confirmed by Ali Salman, a police chief in Najaf, who told Al-Monitor, “A lot of rare species — birds or even cattle — are being smuggled through the desert to neighboring countries. The huge desert and lack of sufficient monitoring bodies and warning devices to deter smuggling operations have facilitated this practice.”

He added, “Hunters from the Gulf states are able to go through border crossings carrying rare falcons, because the law is disregarded or customs employees are bribed.”

The falcon hunters in the Iraqi desert of Karbala and Najaf, the countryside of Babil and ad-Deir in Basra, and the vast agricultural areas in Wasit and Diyala rely on their expert skills and hunting experience. To learn more about the hunters and their activities, Al-Monitor joined Riad Qassem, a hunter from Nasiriyah in Dhi Qar province in southern Iraq, on a hunting expedition.

Qassem told Al-Monitor at the beginning of the trip that he hunts in areas close to his city. “I often only go as far as 10 kilometers [roughly 6 miles] to hunt birds such as francolins and swans, which can be found close to the swamps. Yet now we are going deep into the desert, to increase our chances to hunt falcons,” he said.

We were accompanied by men carrying hunting gear that included hunting rifles, binoculars, nets, ropes, a small tent and a small cage containing birds and crows. Our pickup drove 60 kilometers (37 miles) into the desert to the Qatia area, where, at an elevated position, Qassem tied up the crow in order to attract falcons. He said, “The crow will sense the falcon approaching and starts cawing, which is our sign to prepare the net for our catch.”

Two falcons subsequently approached the crow, but the attempts to catch them failed. Pieces of raw meat were then placed next to the crow underneath a net supported by a stick. When a falcon goes underneath the net, the stick is removed and the falcon is caught.

No firearms were used this time. Qassem said, “We hunt falcons by using this trick, because an unharmed [bird] can be sold at a good price.”

We caught a peregrine falcon — a common species in Iraq that is sold in local markets for $40.

On the way back, the hunters killed francolins that would be used as food, in addition to sandgrouse that would be sold in the market as pet birds.

Some hunters, professionals and amateurs live in the desert. Ismael Latif, a professional hunter who hunts rare birds, told the media in May 2013 that he spends many days in the desert close to Samarra in northern Baghdad to hunt falcons — a hobby he inherited from his grandfather.

While Act No. 57 of 1938 prohibits hunting during mating season, many hunters are not educated on environmental issues in this regard and hence ignore the law.

Police chief Mohammed Ali told Al-Monitor, “The use of hunting firearms without a license and hunting during times of reproductive activity is causing a disaster, namely an environmental unbalance in Iraq. Security authorities in the provinces are preparing to take drastic security measures to halt arbitrary and illegal hunting, and protect hunters deep in the desert to avoid abductions such as the Qatari hunters’ abduction. These measures include increased patrols and warning devices.”

The Iraqi Interior Ministry is the party issuing hunting licenses and monitoring the enforcement of the Wildlife Protection Law Act, which stipulates the imprisonment of not more than three years and a fine not exceeding 3 million Iraqi dinars ($2,700) for violations of the law.

However, the law is not being enforced and whoever wants to go on a hunting trip can do so without obtaining a license. This has prompted the Iraqi Hunters Association, which is a respected organization that was established in 1983, to work on raising awareness of the preservation of rare species and the effects of hunting on the environment.

Nongovernmental organization Nature Iraq said in November 2014 that large numbers of migratory birds stay at the Mesopotamian Marshlands, and called on the government to fight arbitrary hunting using toxicants and hold violators accountable.