When an Egyptian TV show sent its host out on a fox hunt, the graphic footage spurred viewers to action. 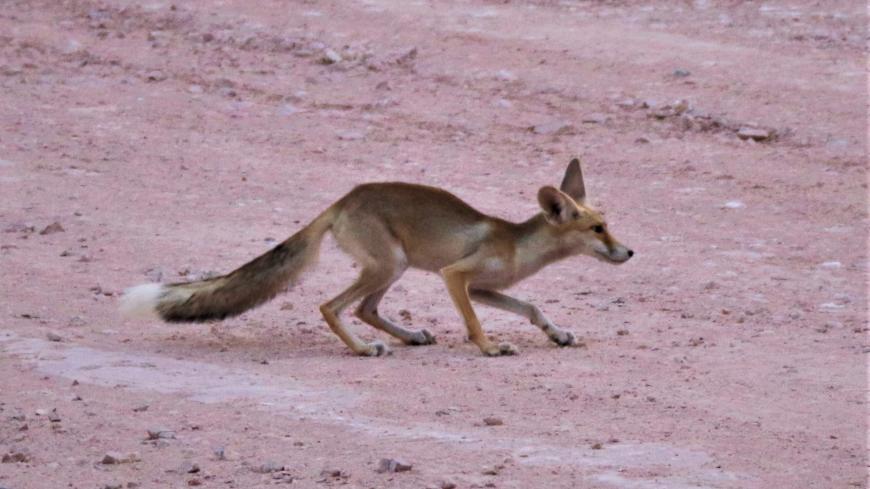 CAIRO — Social media activists and animal rights associations in Egypt have been railing against hunting for weeks, furious over footage of a fox being brutalized on an illegal hunt.

During the Dec. 15 episode of "Sabaya al-Kheir," TV presenter Riham Saeed apologized for airing in a previous episode video of a fox being hunted and tortured. She claimed that the animal depicted was fed and received treatment before being freed.

The controversial Dec. 2 episode showed the fox crying as it was trapped before being brutally bound and hung up. The video was taken by the show's staff on a trip with professional fox hunters, who make their living by selling the fur. The video angered social media and animal rights activists.

Mira Gamal, director of the Mira Gama Shelter in Egypt, told Al-Monitor that the apology was not enough and that those involved in the incident, including Saeed and the men who took her hunting, should have been charged with damaging Egypt's reputation before the world.

Gamal stressed that the brutal practices inherent to the fur trade gives Egypt a poor image among developed countries that protect animal rights. She said the video suggests that Egypt permits poaching of wildlife and called for punitive measures to be taken as a deterrent.

The Supreme Council for Media Regulations ordered that the show be suspended and for Saeed be investigated in light of the angry reactions. A short review took place Dec. 7 and concluded that Saeed could resume hosting the show provided that she apologize on the air.

Lawyer Rania Hamza, a legal representative for a number of animal rights groups in Egypt, told Al-Monitor that Egypt's laws do not do enough to protect animals from illegal hunting as they give the judicial authorities too much discretion in sentencing.

She added, “Since the culture of protecting animal rights is not common or prevalent in Egyptian society, many judges prefer to sentence the hunters with a fine instead of imprisonment. The fines do not exceed 50,000 Egyptian pounds [$3,184], which is a small amount compared to the price of the fox's fur.” The fines, she said are far too low to dissuade the hunters, who can pay them once per trip and still turn a profit.

Article 28 of Environmental Law No. 4 of 1994 prohibits the killing or capturing of wild animals or their possession or trafficking, whether alive or dead, whole or in parts, or actions that cause ecological harm such as tampering with their dens and eggs. Licenses for hunting and fishing are very strict and difficult to obtain.

Article 84 of the law stipulates that the violators of Article 28 shall be punished with a fine of 5,000 to 50,000 pounds ($318-$3,184), and that the animals, plants and fossils shall be confiscated as well as machinery, weapons, equipment and the means of transportation used in committing the crime.

Abdel-Rahman Youssef, founder and president of the Cairo Animal Rescue Team, believes that the law could protect Egypt's animals, but the problem is implementation. He told Al-Monitor, “The Ministry of Environment, which is concerned with protecting animal rights and the ecological balance from illegal hunting, has not announced taking any [serious] action in filing a complaint with the public prosecutor to hold Saeed or the hunters accountable. Although many independent lawyers filed complaints, none of them have been considered.”

The Egyptian Ministry of the Environment condemned the episode on Dec. 3, saying that it promotes illegal hunting and animal torture and poses a threat to biodiversity and livestock. While Minister of Environment Yasmine Fouad stated that the ministry did not license the hunting trip and that it would take legal measures against the presenter and hunters, without specifying or announcing taking any legal action till this moment. Al-Monitor contacted the ministry’s spokesperson, but he did not answer the call.

Samir Sabry, a well-known lawyer in Egypt, submitted a complaint Dec. 4 against Saeed and Al-Nahar TV, which broadcasts the show, and demanded she be prosecuted. The prosecutor has not taken any action.

Youssef warned that the illegal hunting puts Egyptian lives at risk. He explained that when wild animals are disturbed from their habitat in the desert, they may be pushed closer to the cities and endanger the lives of the residents.

Youssef further stressed that illegal hunting of animals such as foxes disturbs the ecological balance and allows their prey, poisonous reptiles such as snakes and scorpions, to flourish. He warned that these animals pose a threat to people who live near desert areas. For example, a highly dangerous snake is spreading in the Fifth Settlement due to urban sprawl and ecological disruption in the deserts surrounding the new urban communities.