In the absence of deterrent laws and decisive actions by the authorities, hunters in Iraq are killing migrant birds on a large scale. 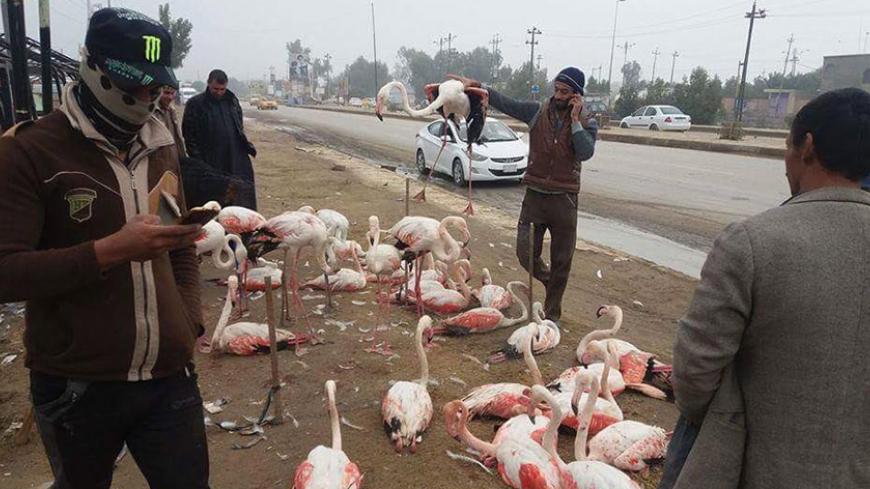 Flamingos are seen for sale in southern Iraq in this picture uploaded on Dec. 30, 2016. - Twitter/@SardarSattar

BAGHDAD — A video showing Iraqi hunters capturing rare flamingos in Maysan governorate, southern Iraq, was posted on Iraqi social media networks on Dec. 25, along with other videos showing people feasting on flamingo meat. On Dec. 27, a large number of flamingos were sold at a flea market in southern Iraq.

The illegal hunting of birds and wild animals has been a widespread phenomenon in Iraq. Nature Iraq, an organization created to protect, restore and preserve Iraq's natural environment, said in a statement on Nov. 11, 2014, “Large numbers of migrating birds to the marshes were shot by hunters using licensed and unlicensed firearms.”

However, the story surrounding the hunting of flamingos sparked wide controversy in the country, prompting people to take to the streets in Maysan governorate on Dec. 28, 2016, calling to stop illegal hunting practices. The governor of Maysan announced a series of strict measures against hunters involved in illegal hunting activities. In the same vein, on Dec. 29, dozens of protesters demonstrated in Nasiriyah, 225 miles southeast of Baghdad, calling for a ban on poaching in the marshes.

In a statement Dec. 26, the Ministry of Water Resources called upon local authorities in the governorates of Basra, Dhi Qar and Maysan to launch “an awareness campaign [on hunting] and to assume responsibility in order to preserve the biodiversity of the marshes,” as swarms of migrating birds flying from Siberia and the coasts of Northern Europe and other cold areas end their voyages in the marshes of Iraq.

The marshes are wetlands, regarded as the oldest natural shelters for many types of birds, including moorhens, which are hunted and consumed in southern Iraq, as well as ducks and flamingos.

In this context, Sameera Abd Mohi, the director general of the Center for Restoration of Iraqi Marshlands at the Ministry of Water Resources, told Al-Monitor, “This behavior [of hunters] is an embarrassment before the international community as it shows Iraq is not committed to the UNESCO terms and pledges in regard to the marshes, which are on UNESCO’s World Heritage List.”

Mohi called upon the minister of water resources to “take into account the biodiversity requirements in the marshes and to take the necessary measures to prevent illegal hunting.”

Mohi said, “Individuals found in possession of a rare bird — dead or alive — or trading rare birds and animals are punished by imprisonment as per a decision by the Wasit provincial council. This is a bold decision, and we encourage other governorates to take similar actions — especially in the marshes in the governorates of Basra, Amarah [capital of Maysan] and Nasiriyah — and to impose fines and penalties against illegal hunters. Local authorities in these governorates have been cooperative in this direction.”

Furat al-Tamimi, a parliamentarian and the chairman of the parliamentary Committee on Agriculture, told Al-Monitor, “It has become imperative to prevent illegal hunting by applying the laws that have yet to be implemented by security apparatuses and local governments, which led to chaotic and random illegal hunting activities.”

Tamimi said, “Iraq’s wildlife is under serious threat because of poaching and illegal hunting activities such as fishing using poison, hunting migratory birds with large nets and killing rare animals.”

According to a statement by the NGO department within the general secretariat of the Council of Ministers on Feb. 27, 2014, Iraqi law bans illegal hunting and poaching. Hunting organizations, which are officially registered as per law No. 12 of 2010, ought to obtain hunting licenses in order to carry out their activities.

Amid the calls to apply the law banning illegal hunting, there have been some attempts to impose sanctions on illegal hunting activities, such as the arrest of four hunters on Nov. 21, 2016, in southern Nasiriyah.

However, sanctions and punishments are not the only way to fight against these ecologically hazardous activities, according to Salama al-Salihi, who is an activist working in the field of biodiversity. Salihi told Al-Monitor, “Eliminating ignorance is equally important as [preserving] ecological balance. Lack of awareness is one of the biggest threats to the Iraqi environment.”

She added, “Should the encroachment on the marshes continue, these areas will no longer meet the requirement of the UNESCO World Heritage List.”

On Dec. 30, environmental activist Karar Shukri said in an article that there is “a lack of awareness in Iraq,” accusing those “encroaching on the environment of being ignorant and accomplices in sabotaging nature in Iraq.”

In the same context, Suheila Abbas, a member of the Agricultural Committee in Babil governorate, told Al-Monitor, “People do not care about hunting laws. This is not to mention the absence of control over important environmental areas, which encourages hunters to continue hunting birds, fish and animals with illegal means.”

Sanctions and punishments — albeit relatively effective — are not the only answer to limit illegal hunting. In addition to introducing environmental sciences into the school curricula, an eco-friendly culture that encourages educating people on their natural surroundings and living organisms is needed.