Why are kidnappings on the rise in Baghdad?

As the Islamic State is being forced out of Iraq, abductions, robberies and other crimes are on the rise as a result of the proliferation of militias. 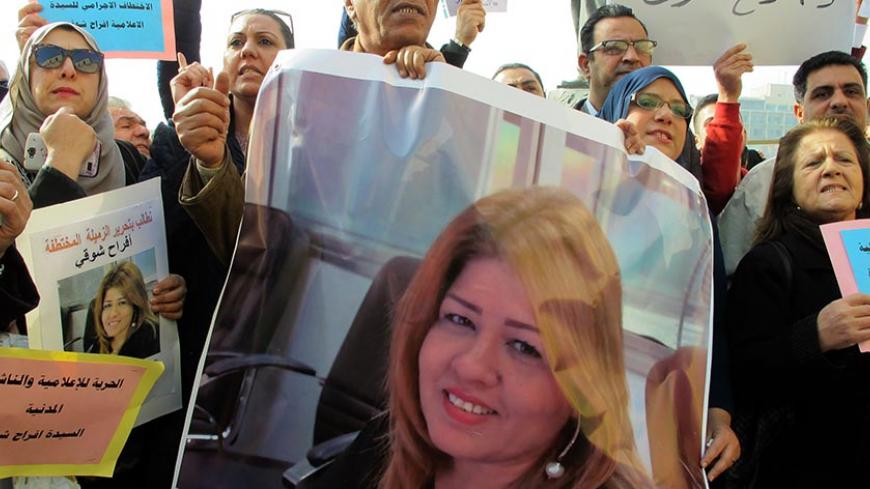 Protesters hold portraits of Iraqi journalist Afrah Shawqi, who was abducted from her home in a southern neighborhood of Baghdad, during a demonstration calling for her release, in Baghdad, Iraq, Dec. 30, 2016. - SABAH ARAR/AFP/Getty Images

BAGHDAD — Officials in Baghdad agree crime is on the rise there, though they differ on the causes and offer little in the way of hard statistics to back up their claims.

Baghdad’s criminal court announced Jan. 17 that many areas in the capital have witnessed a significant increase in cases of kidnapping, theft, pickpocketing and robberies recently, stressing that organized gangs are behind some of these crimes. Examining Magistrate Alaa Abdullah said, “Palestine Street, in the center of Baghdad, came first in terms of registered crimes at the court during the current year, with more than 31 reported cases.”

Officials fear that kidnappings in particular are affecting investments in Iraq. The kidnappings have become a threat to businesses, their employees and their investors. This could lead businesses to move to other Iraqi cities that are seen as safer, or to leave or avoid the country altogether.

In one recent case, Haidar Hassoun, general manager of the Iraqi Media Foundation, was the victim of an attempted kidnapping Jan. 2 in northern Baghdad.

On Dec. 16, Ali Sajjad al-Khafaji, 14, was on his way home from school in the upscale Karrada area in central Baghdad when four people in a four-wheel-drive vehicle snatched him from the street. Although the family of the kidnapped youth paid a ransom of $41,000 to the kidnappers, their son's body was found Dec. 23 dumped in the Tigris River. He had been sexually assaulted and stabbed to death.

Some gangs hire a person called “Al-Allas," which means a bounty hunter. This person’s mission is to provide the names and details of wealthy individuals or families to gang members. Gangs ask for ransoms, but often end up killing the victims anyway.

Riyadh al-Adhadh, head of Baghdad’s Provincial Council, said in a press statement Dec. 28, “During the month of December 2016, Baghdad saw 25 kidnapping cases. These are [just] the cases that were reported to the security forces. I believe this phenomenon is growing because of unemployment and people’s need for money.”

Baghdad Operations Command is the security force for the Iraqi capital. It has a department specifically to combat kidnapping and track down gangs. The department has set up a kidnapping hotline for citizens to report cases. Despite these efforts, the kidnappings continue. Some officials, including Iraqi Prime Minister Haider al-Abadi, believe that the general amnesty law passed Aug. 25 by parliament is at least partly to blame for the rise in kidnappings.

Under the law, people convicted between 2003 and the date the law was approved can apply for amnesty, except those convicted of 13 types of crimes including terrorist acts resulting in death or permanent disability, rape, human trafficking, money laundering and embezzlement. Though the law doesn't mention kidnapping specifically, some experts believe it allows these criminals to manipulate the system to their benefit. Parliament is considering amendments to the law.

Saad al-Matlabi, a member of the Security Committee of Baghdad’s Provincial Council, told Al-Monitor, “We do not have any statistical data on abductions in Baghdad.”

However, Matlabi did say he attributes the increasing in kidnappings to “the collapse of the security situation and the government’s inability to hold criminals accountable and to track them down. According to our information, abduction cases are on the rise and are mostly motivated by money.”

According to some reports, more than 700 people were kidnapped in Baghdad during the first nine months of 2016. These figures are the cases that were officially reported to the security forces, the sources said, while there are dozens and maybe hundreds of cases that are not reported out of fear for the lives of the kidnapped.

In the chaos of 2003, when a US-led coalition invaded Iraq, and at the height of the civil war in 2006 and 2007, kidnappings climbed and gangs proliferated. This led to the birth of the most prominent abduction groups and organized crime.

Mohammed al-Rubaie, deputy head of the Security Committee of the Baghdad Provincial Council, said in a press statement Jan. 1 that influential political or armed groups are behind the kidnappings to secure funds through ransoms.

With the proliferation of weapons and vehicles owned by influential people in political parties and armed groups — who aren't searched when they pass through checkpoints — the kidnappings are expected to rise.