Rogue members of the Free Syrian Army and the Syrian Democratic Forces are thought to be behind kidnappings of Afrin residents in exchange for money. 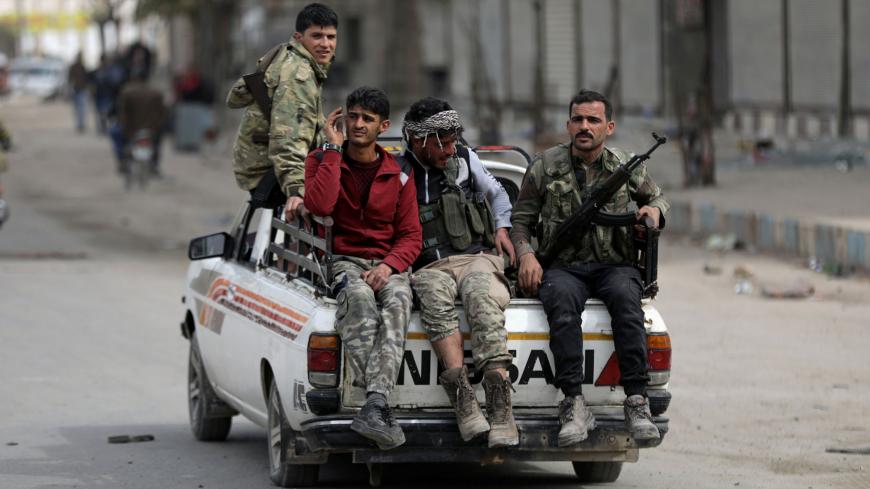 Turkish-backed Free Syrian army fighters ride in the back of a truck in Afrin, Syria, March 19, 2018. - REUTERS/Khalil Ashawi

ALEPPO, Syria — The Northern Brigade, affiliated with the Free Syrian Army (FSA) in Afrin, was able to free 9-year-old Ahmad Taher Mostafa on Oct. 16, one day after a gang kidnapped him after his grandmother dropped him off at the private Al-Asdiqa School in Afrin.

Maysara Abdullah, a military leader in the Northern Brigade, told Al-Monitor, “The kidnappers took Mostafa away Oct. 15, and they contacted his parents, asking for a ransom of $50,000 in return for his release. The father reported the incident to the FSA, and the security office of the Northern Brigade investigated the kidnapping and pursued the gang. They found its location on the outskirts of Afrin, raided the place, freed the child and arrested the gang members.”

Abdullah added, “The security office of the Northern Brigade handed over the kidnappers to the military police in Afrin to conduct the necessary investigations, then to refer them to the FSA judiciary to be punished for their crime.” The investigations with the military police are still underway, but sources told Al-Monitor on condition of anonymity that the kidnappers previously fought in the FSA; after their dismissal they formed a gang to kidnap people in return for ransoms.

In the past month, a number of civilians have been kidnapped from Afrin, in northwestern Aleppo province, though there are no official statistics. Afrin citizens accuse the FSA and police of not doing enough to defend residents against gangs.

Ibrahim Kawwas, who owns a grocery store in Afrin, told Al-Monitor, “Security chaos is rising in Afrin, and kidnappers stalk civilians, especially the rich, to kidnap them, then ask for a ransom from relatives for their release. We can no longer go out at night and walk in the streets on Afrin’s outskirts. The situation is worrying. The kidnappers claim to be affiliated with the FSA so they can pass through the [FSA] checkpoints freely.”

Kawwas added, “The FSA factions are fully responsible for the security chaos in Afrin and for the presence of kidnappers. We no longer feel our kids are safe to go to school. The FSA and police must take responsibility and stop this chaos. Our life is intolerable amid the lack of security.”

On March, the Turkish military and the Turkish-backed FSA seized Afrin from the Kurdish People’s Protection Units (YPG), which is under the umbrella of the Kurdish-dominated Syrian Democratic Forces (SDF).

The Northern Brigade arrested a group of four kidnappers Oct. 10, saying they belonged to the SDF and had kidnapped dozens of people in Afrin. Shortly before their arrest, they were preparing to kidnap a trader and ask for a $50,000 ransom, according to the brigade.

Also on Oct. 10, the security battalion affiliated with the FSA’s 3rd Legion in Afrin raided a hideout used by another kidnapping gang and released 11 civilians whom armed men had abducted to force their parents to pay a ransom.

Thaer Fahed, a military leader in the FSA-affiliated Ahrar al-Sharqia in Afrin, told Al-Monitor, “Kidnapping of civilians in Afrin has been on the rise, and anonymous gangs have been financially extorting the parents of the victims. Some of these criminals work for the SDF to stir chaos in the city, while others are affiliated with the FSA. Some are even civilians who went rogue and formed kidnapping gangs to make money.”

The FSA controls Afrin and the SDF is positioned south of Afrin in Tel Rifaat and Abyan, and in towns on the front lines with Afrin. Some residents say SDF members often enter Afrin as part of smuggling operations and hide in Afrin suburbs in the woods. They reportedly conduct assassinations and target FSA members and leaders.

Fahed added, “Within Ahrar al-Sharqia, we increased our security checkpoints in Afrin and its suburbs as of October to arrest these gangs and obstruct them. We arrested many members, some of whom admitted to belonging to the SDF or the FSA. We handed them over to the military police for investigation and prosecution for their crimes against civilians.”

Haidar Sayad, an officer in the military police affiliated with the FSA in Afrin, told Al-Monitor, “The military police in Afrin are deploying huge efforts in coordination with the FSA to curb kidnappings, and has indeed arrested many people accused of kidnapping civilians for a ransom. We promise Afrin citizens to cleanse the area of kidnappers and restore stability soon.”

Al-Monitor was unable to reach former captives whose parents paid ransoms and fear retaliation from those gangs if they speak out.