Civilians in Syria’s southern province of Daraa are living in constant fear amid increasing cases of kidnappings. 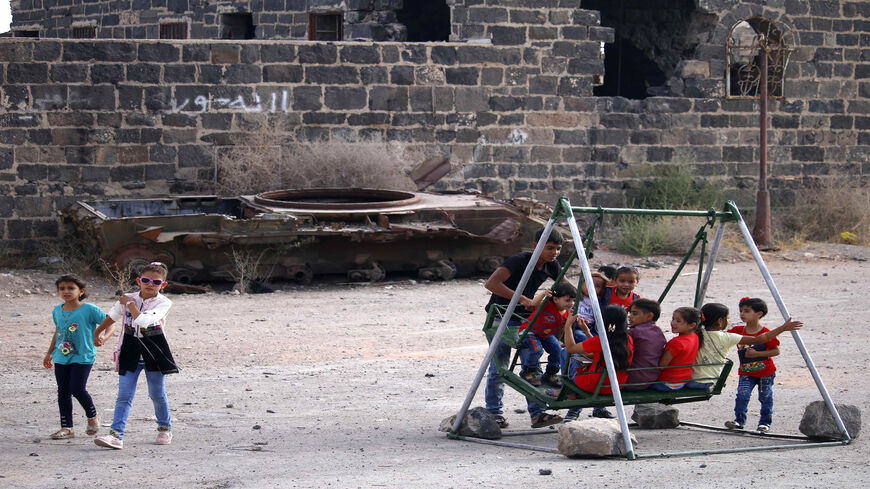 Children play on a swing on the first day of Eid al-Adha, in the opposition-held southern city of Daraa, Syria, Aug. 21, 2018. - Mohamad Abazeed/AFP via Getty Images

Kidnappings for the purpose of collecting ransom have increased this year in southern Syria, stirring panic and fear among civilians. These operations are taking place in the absence of any intervention by police forces and army checkpoints at the entrances to the cities and towns in Daraa.

Amer al-Horani, spokesman for the Horan Free League, a media organization that documents violations and reports current events in Daraa province, spoke to Al-Monitor about the most prominent kidnappings and handovers of kidnapped individuals that took place this year.

“We documented three kidnappings in January. Some of those who were kidnapped were freed after a hefty ransom was paid. On Feb. 21, Fawaz Qetaifan, 8, was returned to his family after negotiations that lasted about three months. He was kidnapped by an unidentified gang who released him after the parents paid a ransom of about 500 million Syrian pounds," or about $131,000 at the black market rate, Horani said.

He noted that this incident garnered an unprecedented media and government buzz, after video footage showing the child being tortured went viral in early February. Activists launched several social media campaigns under the title “Save the child Muhammad Fawaz Qetaifan.”

After his release, a photo of Fawaz circulated, showing him sitting next to the Daraa province police commander, Brig. Dirar al-Dandal. No details were disclosed about his release. The Qetaifan tribe only said the child was freed in exchange for a ransom paid to an unknown gang through an intermediary.

Horani criticized the appearance of the child’s father and uncle in interviews on Syrian government TV stations, where they thanked the government for its role in saving the child. “The police command did not arrest any of the kidnappers. This is evidence of the state’s inability to protect civilians," he said.

Many Syrians blame the government, which is nominally in control of the area, for either not doing enough to stop the kidnappings, or even complicity by some in the security forces.

Majd al-Zoghbi, resident of the town of al-Taybeh, in the eastern countryside of Daraa, told Al-Monitor that the kidnapping of Fawaz highlighted the cases of hundreds of kidnapped children in Syria. He mentioned the case of Salam al-Khalaf, 8, who was kidnapped in mid-March 2020 on her way back from school in al-Taybeh in front of eyewitnesses by masked men who entered the town in a van. To this day, the girl remains missing.

He said that the girl's family has made great efforts to find her for the past two years. Salam's school uniform and bag were found on the outskirts of the town a month after she went missing. Her family offered huge sums of money to anyone who provides information about her fate, and pledged to pardon her kidnappers and not file any charges if she returns safe, but to no avail.

Kidnappings are not only targeting children. In January, Haider al-Rifai, a dentist from the town of Umm Walad, east of Daraa, was kidnapped by an unknown group of men. He was released Feb. 1.

A relative of Rifai spoke to Al-Monitor on condition of anonymity about the details of Rifai's release. “About two months ago, a gang kidnapped him and stole belongings from his car while he was on the road between the town of Karak al-Sharqi and Umm Walad, where he lives. The gang asked for a $200,000 ransom. After negotiations with his brother, he was released for $30,000. The gang members dropped him near the entrance to his town, after receiving the money through an intermediary who refused to have his identity disclosed.”

Meanwhile, the fate of some of the kidnapped remains unknown. The father of Mohammad Mamoun Zatam al-Halqi, 23, who was kidnapped Jan. 13 from the city of Jasim, appealed to the tribal elders in Daraa province in order to pressure the kidnappers to release his son.

Muhammad al-Jalam, a friend of Halqi, told Al-Monitor, “The family sent a number of city notables to speak with the suspects after losing all hope that the government security forces would make any serious steps to solve the case. However, they denied the accusations.”

The Daraa tribes denounced in a Feb. 10 statement the kidnapping incidents and reiterated that those whose involvement in such crimes is proven shall be punished by exile.

Local sources reported that two people from the town of Sahem al-Golan involved in a kidnapping gang were recently exiled. A tribal ruling sanctioned them with a fine of 2 million Syrian pounds, or about $5,260 at the black market rate, and they were banned from setting foot in the provinces of Daraa and Quneitra.

Activists from Daraa lamented the neglect shown by the security and police forces regarding the kidnapping cases. Some even accuse officers of these forces of facilitating the kidnapping operations. They wondered why dozens of security services and hundreds of checkpoints are deployed in southern Syria if they cannot save a child from the hands of gangs. Activists argue that the tribal exile punishment and the payment of the requested ransoms will not deter the perpetrators from continuing their crimes.

Meanwhile, experts in the field of communications said that the location of the kidnapped can be detected by identifying the nearest cell tower via GPS services or other communication interception and tracking tools.

The residents of Daraa and Suwayda in southern Syria have been haunted by these kidnapping incidents for years. The local Suwayda24 website reported in March 2020 that 151 civilians from the two provinces had been kidnapped in 2019 in exchange for a ransom. A number of them were freed when the ransom was paid, while the fate of many others remains unknown.