Syrians continue to look for their loved ones, believed imprisoned or executed by the Islamic State. 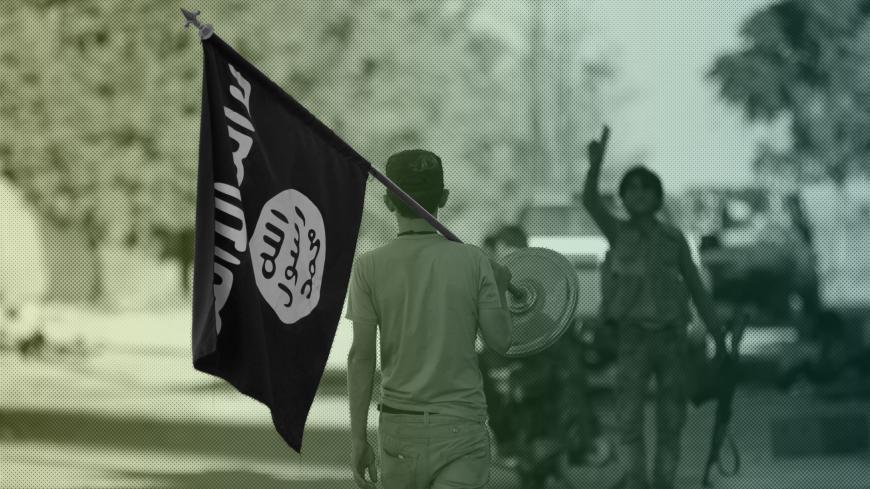 A rebel fighter takes away a flag that belonged to Islamic State militants in Akhtarin village, after rebel fighters advanced in the area, in northern Aleppo governorate, Syria, Oct. 7, 2016. - REUTERS/Khalil Ashawi

The Syrian Observatory for Human Rights (SOHR) reported that 2,038 Afrin residents have been detained by Turkish forces and supporting factions since last year.

On June 24, SOHR reported that the body of a Kurdish national, Rashid Khalil, was discovered in the countryside of Afrin. He was subjected to torture and burns and dumped near the village of Qastal Jendo in Sharran. The monitoring group said armed men in Ezzaz, in the northern Aleppo countryside, had abducted Khalil and killed him, along with his 11-year-old disabled child Mohammad Rashid Khalil. The men demanded a ransom of $100,000 for each in exchange for their release. The body of the child was not discovered.

Al-Monitor met with Radwan Khalil, the former public relations officer for the Syrian Democratic Forces (SDF). Factions kidnapped Khalil on the outskirts of Manbij a year ago, by the Sajur River. The area is affiliated with the armed Syrian opposition that is backed by Turkey.

“They took us to a prison in the Hor Kilis area on the Syrian-Turkish border in the town of al-Rai northeast of the city of Aleppo," he said. "We were interrogated by Turkish intelligence members. The prison was packed with thousands of detainees, including fighters from the Syrian regime and Kurdish civilians from Kobani and Afrin, in addition to members of the People's Protection Units (YPG) and IS fighters who tried to defect. I was released three months ago after the intervention and pressure by the global coalition on Turkey.”

Sherihan Rashu, a female Yazidi, was kidnapped by gunmen from Sinjar, Iraq, in August 2014. She was sold in slavery markets, first in the Iraqi city of Mosul and then in Raqqa, Syria.

“Three years ago, Abd al-Rahman al-Jordani, a slave trader in the city of Raqqa, sold me to Abu Abd al-Rahman al-Iraqi, an official in Jabhat al-Nusra in Idlib," she told Al-Monitor. "He took me from the countryside of Hama to Jabal al-Zawiya that was controlled by Jabhat al-Nusra three years ago and put me in a prison that he runs in Idlib. The prison was, in fact, a market for the sale of women and children and the torture of men.”

She said that IS and Jabhat al-Nusra kidnapped "thousands of Syrian Christian, Muslim and Alawite and Iraqi Yazidi women that they found in Mosul and Raqqa and put them in Idlib prisons. They sold them in slavery markets in Iraq and Syria. The prison where I was detained by Abu Abd al-Rahman al-Iraqi was dedicated to the sale of Syrian Christian women. We were tortured in special rooms and raped day and night.”

The Syrian Network for Human Rights (SNHR), a local monitoring organization, estimated in 2018 that over 90,000 people have been forcibly disappeared in Syria. A July 2019 SNHR report stated that at least 2,460 cases of arbitrary detention were documented in the first half of this year.

Human Rights Watch reported that “between February and April, anti-government groups based in Ghouta — including Jaysh al-Islam, Ahrar al-Sham, and Faylaq al-Rahmane — killed and maimed hundreds of civilians in indiscriminate attacks on Damascus.”

Euphrates Archbishop Antranik Harutiun Aivazian said that “the families of the kidnapped in Ghouta in Damascus were waiting for Jaish al-Islam to free about 5,000 civilians it had kidnapped, but it only allowed 200 to leave and killed the rest.”

Aivazian was speaking April 5 at a conference in the building of the Foreign Relations Authority of the Kurdish self-administration. Rachel Diyal Armando, 16, who hails from Damascus, spoke at the same conference. IS kidnapped her, along with her family, while they were in Raqqa in 2014 visiting family. The SDF freed Armando in al-Baghouz on the Syrian-Iraqi border in March.

“Armed men forced me to marry a 50-year-old man from the city of Idlib," she said. "I was only 11 years old. They also forced me to convert to Islam. IS kidnapped hundreds of people from the Christian community and sold Christian and Yazidi women in slave markets in Deir ez-Zor, Raqqa and al-Baghouz, and carried out field executions of men.”

In the city of Kobani, families of IS abductees and activists continue their social media campaign under the Arabic hashtag, #We_want_our_detainees. They organized dozens of protests in June in the Free Woman Square in the center of Kobani, raising pictures of missing loved ones. The families demanded that the US-backed SDF and the global coalition help them uncover the fate of their relatives.

On Feb. 21, the Kurdish Organization for Human Rights in Syria (DAD) called on the United Nations and the International Human Rights Council to disclose the fate of the detainees. “There are approximately 1,300 people or more missing from the city of Kobani and its countryside, as well as hundreds of detainees and abductees from all other Syrian areas that were controlled by IS,” the statement read.

According to Human Rights Watch, IS, in November 2014, "initially stopped about 250 Kurdish students from Kobani as they traveled home after taking their middle school exams in Aleppo on May 29."

On July 2, the initial response team set up by the Raqqa civil council found 190 bodies in the graveyard of Talaie camp. The specialized teams affiliated with the civil council in the city of Raqqa continue their work in opening and uncovering the mass graves left behind by IS. Around 4,700 bodies — civilians killed by IS — have been recovered so far.

The Iraqi Ministry of Human Rights said in July 2015 that “IS sold a hundred Syrian women it had kidnapped in the city of Fallujah in the province of Anbar, Iraq, where it established a slave market.” Sale prices ranged between $500 and $2,000, according to the ministry.

The UK-based Daily Mail newspaper revealed in 2014 that IS hired physicians to harvest human organs from its hostages, including children in Syria and Iraq. The newspaper added that IS established a specialized organs smuggling system tasked with selling human livers and kidneys. Organs were sold to international gangs specializing in this trade.