A Kurdish civilian was tortured and killed after he was kidnapped by an armed opposition faction in north Syria, days after the United Nations condemned the detention of civilians in Syria. 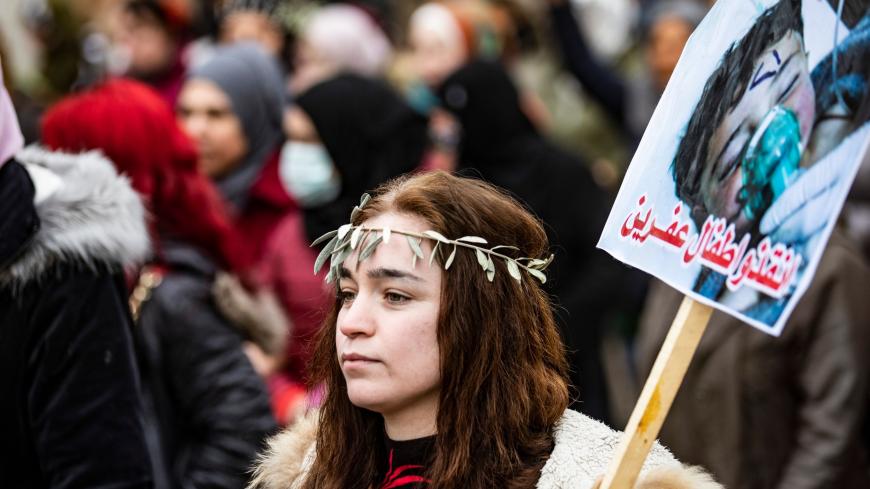 A Syrian Kurdish woman wears an olive wreath as Syrian Kurds demonstrate in the northeastern city of Qamishli on Jan. 20, 2021, to protest the Turkish occupation of the Kurdish Syrian city of Afrin, marking three years since Turkey and its Syrian proxies took control of the region in the northern province of Aleppo province. The slogan in Arabic reads, "Don't kill Afrin's children." - DELIL SOULEIMAN/AFP via Getty Images

The Sham Legion, affiliated with the Turkish-backed Free Syrian Army (FSA), and military police recently kidnapped three civilians, including a 70-year-old man, in the northern Syrian city of Afrin.

The kidnapping came only days following a March 1 UN report entitled "A decade of arbitrary detention and imprisonment," which called for an end of kidnappings and crimes committed by armed groups in Syria, including the Islamic State and Hayat Tahrir al-Sham.

The authors of the report, from the Independent Commission of Inquiry on the Syrian Arab Republic, said, “Tens of thousands of people in Syria have been unlawfully deprived of their liberty at any one time. Arbitrary detention and imprisonment have been deliberately instrumentalized to instill fear and suppress dissent among the civilian population or, less frequently, for financial gain. Armed groups have also targeted religious and ethnic minority groups.”

The Afrin Post, a local paper focusing on Syrian affairs, more precisely on Afrin, reported that the Sham Legion and the military police kidnapped three elderly people March 3. One of them was killed and the fate of the remaining two remains unknown, it added.

Local sources told the Afrin Post that the Sham Legion and the military police had kidnapped Sheikmos Mustafa Qasim, Muhammad Khalil Haji Sheikho and Saeed Qanbar. It said Qasim, 73, was killed under torture and buried March 6 in the cemetery of the border town of Meidan Ekbis in Rajo subdistrict, without the presence of his family and without conducting the funeral rites followed in Afrin.

Massoud Sheikmos Qasim, the victim’s son, now lives in Aleppo after leaving Afrin following the city's seizure by the FSA in March 2018. He said the kidnapping was the second of his father in three years.

The son told Al-Monitor, “The FSA-affiliated Hamza Division first kidnapped my father after the FSA and Turkish army occupied Afrin on March 25, 2018. Back then, they demanded a ransom of 200,000 Syrian pounds [which amounted to around $600 back then].” Qasim was released after the family paid the ransom.

“On March 3, my father was once again kidnapped. One day after he was kidnapped, the military police allowed my father to contact us, and he told me that the military police and the Sham Legion relentlessly beat him, tortured him and deprived him of food and drink. He told me he was going to die from torture. The Sham Legion later contacted us via WhatsApp to demand a ransom of 2 million Syrian liras [$500] for his return. My brothers and I agreed to pay provided they do not torture my father. But we were shocked to hear that our father was tortured and killed before we sent the money,” he added.

The son also said, “The pro-Turkish Syrian factions killed my father to seize his properties after they confiscated 700 of his olive trees and stole his money.”

The UN Human Rights Council quoted Karen Koning AbuZayd, a commissioner on the Independent International Commission of Inquiry on the Syrian Arab Republic that compiled the report, as saying, “The wealth of evidence collected over a decade is staggering, yet the parties to the conflict, with very few exceptions, have failed to investigate their own forces. The focus appears to be on concealing, rather than investigating crimes committed in the detention facilities.”

Ibrahim Sheikho, the spokesman of the Human Rights Organization in Afrin, told Al-Monitor that the Turkish-affiliated Syrian factions kidnapped on March 9 civilians from the village of Kamruk in the town of Maabatli in Afrin’s countryside, and demanded their families pay a ransom of 1,000 Turkish liras ($700) for their release.

“There are more than 7,400 civilian men, women and children detained in the militias’ prisons, including 3,500 detainees whose fate has been unknown since Afrin was occupied,” he added.

On the reasons behind the kidnapping and arrest of civilians in Afrin, Sheikho said that the FSA arrests and tortures Kurds “under the pretext of being terrorists and spies for the [Kurdish-led] Syrian Democratic Forces.”

He said, “Kidnappings have spiked in the Turkish-held parts of Syria, whether in Azaz, Jarablus, Afrin, Ras al-Ain or Tell Abyad. The pro-Turkish Syrian factions are using kidnappings to blackmail the families, demand ransoms and seize the victims’ properties.”

Sheikho pinned big hopes on the efforts of the UN commission to bring the perpetrators and criminals to international courts and hold them accountable for war crimes.

On March 11, UN High Commissioner for Human Rights Michelle Bachelet called for the formation of an independent mechanism, with an international mandate, tasked with revealing the fate of the kidnapped and supporting their families.

Jamila Khoder, a civil activist from Afrin, condemned the UN over its lack of action when it comes to the violations the Turkish-backed factions commit against the civilians in Afrin.

Adel Sabhan, a legal expert focusing on international law who works for private companies in Iraq, told Al-Monitor, “The illegal detentions that have happened in Syria contradict all laws, charters and international covenants, including the Hague Convention of 1907.”

He added, “The UN commission based its report on much tangible evidence, most importantly on the testimonies of the victims and their families. This is why the UN has achieved positive results due to the abundance of evidence condemning the perpetrators of these crimes.”

The March UN report also blamed the governments that have supported the different conflicting parties for the deteriorating situation in Syria and called on them to end the violations.

The findings of the UN commission, which were submitted to the Human Rights Council in Geneva, are based on investigations conducted in more than 100 detention centers affiliated with Syria’s various parties.