Since the Turkish-backed FSA took control of areas north of Aleppo and some areas of the countryside of Raqqa and Hasakah, the bombings that claimed hundreds of civilian lives never stopped, nor did the kidnappings and assassinations, while clashes erupted among some factions allied with Turkey. 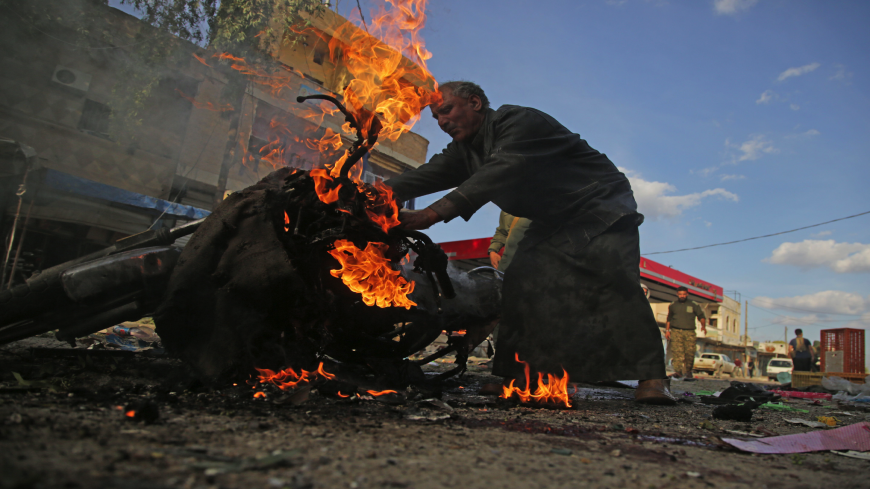 A Syrian man stands next to a burning motorcycle at the site of a car bomb in the northern Syrian Kurdish town of Tell Abyad, on the border with Turkey, on Nov. 2, 2019. - Photo by BAKR ALKASEM/AFP via Getty Images

The Turkish army, in cooperation with the Syrian opposition’s Free Syrian Army (FSA), launched a military operation to expel the Islamic State (IS) from the cities of Jarablus, al-Bab and al-Rai in northern Syria on Aug. 24, 2016. This operation was dubbed Operation Euphrates Shield, after which the area was then named.

However, since then the area has been experiencing security chaos, as kidnappings and explosions, especially using rigged motorcycles, are almost ongoing, not to mention the continuous clashes among factions affiliated with Ankara.

Meanwhile, security chaos also prevails and weapons spread in the city of Afrin and its countryside, which the FSA factions controlled following Operation Olive Branch, the Turkish-backed operation to expel the Kurdish forces on Jan. 20, 2018. This chaos is manifested through assassinations, kidnappings, ransoms, and car and motorcycle bombings as well as explosive devices.

The area where Turkey launched Operation Peace Spring on Oct. 9, 2019, in cooperation with the FSA to expel the Kurdish Syrian Democratic Forces (SDF), is subjected to dozens of rigged car and motorcycle explosions in the cities of Ras al-Ain and Tell Abyad and the towns of Tal Halaf, Suluk and Hamam al-Turkman, claiming dozens of victims, the majority of whom are civilians.

FSA spokesman Maj. Yusuf Hamoud told Al-Monitor there is no confrontation between factions in those areas. But, according to Hamoud, what is actually happening is a deliberate action targeting some groups within the FSA to get rid of them, as part of the fight against undisciplined, abusive groups. This cannot be considered factional fighting since it aims to control security, he explained.

Meanwhile, Ahmed al-Zaiim, an FSA leader in the northern countryside of Aleppo, told Al-Monitor, “Some countries (he did not name which) worked to prolong the period of the Syrian revolution and introduced IS to it, which is one of the causes of this security chaos, so Turkey must confront this chaos in these areas,” in reference to the areas where Ankara launched its three military operations.

“In order to do so,” he explained, “Turkey must rely on the first revolutionaries because they are the real decision-makers who should not be marginalized.”

More than 30 factions are affiliated with the FSA, which controls these areas — the most prominent of which are the Sultan Murad Division and Sultan Muhammad al-Fateh Brigade.

Muhannad Darwish, a field activist in the northern countryside of Aleppo, told Al-Monitor, “This security chaos has many political, social and structural dimensions and causes. One of those causes is the presence of many enemies, intelligence agencies and spies inside the 'liberated' areas.”

Darwish noted, “Turkey is working to end the state of security chaos, but it needs time to control things, especially since the area is militarily and politically unstable. There are several points that Turkey can work on in order to control the security chaos, the most important of which is to try and stop factions from bickering and settling scores among themselves and rather focus them on gathering under one security institution. Turkey must also choose competent leaders and eliminate corrupt members who are causing security chaos.”

Mohammed Nour Al-Mayhani, a researcher specializing in Turkish affairs at Istanbul University, told Al-Monitor, “The reasons for the security chaos are mainly due to the absence of a unified leadership capable of controlling the security situation away from Turkish supervision. Meanwhile, the factions refuse to merge into a single entity that unites them because of their personal ambitions, while the Turkish policy mainly relies on bringing certain factions together at the expense of others.”

He noted, “The Turkish army rarely intervenes to settle disputes between the warring factions. Rather, Ankara is often content to push the FSA and military police to take care of rival factions, and should the situation worsen, the Turkish authorities respond by shutting down some vital facilities, as they did in Jarablus and al-Bab. Although such measures contribute greatly to easing the tension and ending the fighting, they remain a temporary solution, especially with Ankara being forced to keep pace with local actors who see what is happening as mere civil fighting that can be solved by tribal mediation only.”

Mayhani believes Turkey is benefiting, be it directly or indirectly, from this fighting in getting rid of any faction whose loyalty is doubtful. This was evident in the fighting that resulted in the elimination of the FSA-affiliated Jaysh Usad al-Sharqiya, whose members are from Deir ez-Zor. Jaysh Usad al-Sharqiya had headquarters in northern Aleppo, Afrin, al-Bab and Jarablus before they were completely removed from the military equation in the Euphrates Shield, Olive Branch and Peace Spring areas.