After years of various security plans failed to halt terrorist attacks in the Iraqi capital, the Interior Ministry's latest proposal is now under evaluation. 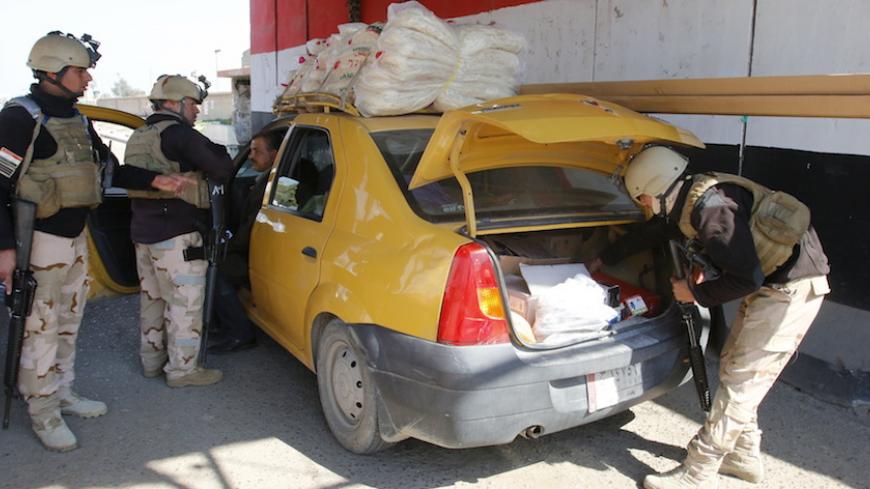 Iraqi security forces check the trunk of a vehicle at a checkpoint, as security measures increase in the west of Baghdad, Feb. 29, 2016. - REUTERS/Khalid al Mousily

BAGHDAD — The Iraqi Cabinet has formed a supreme committee consisting of representatives from a number of ministries and security institutions to develop an integrated surveillance system for Baghdad.

Since 2003, Iraq's successive governments have failed to halt the bloodshed in Baghdad. Terrorist attacks have been ongoing, especially car bombs. The failure of all security plans in the past 13 years and the ongoing terrorist attacks are due to the poor management of the security file.

Security projects have included the 2007 Operation Imposing Law and the Baghdad wall, an idea that was suggested in 2011 and again in 2016. In 2014, the Baghdad Operations Command (BOC) proposed a project to monitor vehicles in the capital. The project, which remains incomplete, consisted of electronic tracking devices attached to the vehicles. In early 2016, it was restarted under the name of “Saqr Baghdad,” but implicated in a major BOC corruption case the parliamentary security committee investigated in May.

After all of these ineffective attempts, the government is again endeavoring to solve Baghdad’s security problem. But the new plan, if approved by the government, is unlikely to succeed, in light of the political and sectarian interference in all of the state institutions that are already crippled by financial and administrative corruption.

Saad al-Matlabi, a member of the security committee of Baghdad's provincial council, told Al-Monitor, “The security system, which the Cabinet recently agreed to examine, consists of a project prepared by the Interior Ministry. It is an integrated security system that will be implemented in all Iraqi provinces if it proves successful in Baghdad.”

He said, “The Interior Ministry tried to learn from all of the previous security projects, and suggested developing Saqr Baghdad to monitor vehicles inside Baghdad through a tracking system, establishing an electronic wall around the capital and digging trenches and setting up concrete barriers in rugged and agricultural areas where electronic tracking is difficult. This is in addition to limiting the entrances to Baghdad to eight points equipped with sonar bomb-detection devices.” He added, “The Cabinet agreed that the project’s details will be examined by all concerned security agencies.”

Following the Karrada bombing July 3, Prime Minister Haider al-Abadi ordered all checkpoints to refrain from using the sonar devices that had failed to detect the car bombs as the government was once again forced to rethink its security efforts.

Security analyst Ahmed Al-Sharifi told Al-Monitor, “Infrared [devices] can be used to detect what’s inside a vehicle, just as baggage is checked at airports. Yet no devices can detect explosives.”

Sharifi said, “The Interior Ministry's new security project, which was announced by resigned Minister Mohammed al-Ghabban, can be summarized as placing the security of individual cities in the hands of the Interior Ministry’s security agencies, pushing the army back into their camps and canceling the joint operations commands.”

Ghabban announced his resignation July 5, two days after the Karrada bombing. He said that he had submitted his resignation to Abadi and that he will not withdraw it unless the government conducts radical security reforms and ends its interference in the security agencies' powers.

Sharifi added, “Political interference in the Interior Ministry’s job is trying to thwart the Saqr Baghdad project, Baghdad wall and any other plan to preserve the capital’s security. Many parties have interests in keeping security situation as is.”

Ammar Tohme, the deputy chairman of the parliament's Security and Defense Committee, told Al-Monitor that the various plans' weak point is “the weak intelligence work, which should be a part of the new security project.”

He added, “The surveillance of vehicles in Baghdad and set-up of a monitoring system are vital. Yet preventive actions consisting of intelligence and pre-emptive actions are more important."

For nearly nine years, there have been “emergency” measures that are not approved by parliament. Thus, the abolition of the joint operations commands in cities including Baghdad is a natural starting point for security reform.

One problem cannot be overcome under the sectarian quota system: Control of the security ministries must be wrested from the political parties and managed by independent figures. Until then, security cannot prevail over the capital or the rest of the Iraqi provinces.