Repercussions of the massive July 3 suicide bombing in Baghdad could include extensive political change and government reshuffling, especially if such attacks continue. 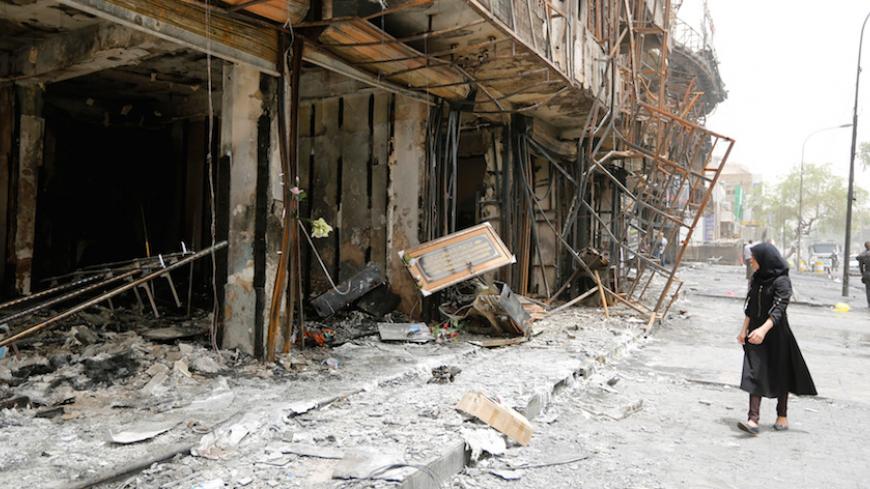 A girl walks past the site after a suicide car bomb attack at the shopping area of Karrada, a largely Shi'ite district, in Baghdad, Iraq July 4, 2016. - REUTERS/Ahmed Saad

Baghdad's residents are demanding beefed-up security measures and an international investigation into the gruesome July 3 bombing that rocked Baghdad's busy Karrada district, killing almost 300 people and injuring 200 more. The death toll is expected to rise further, as people are still missing. The bombing was the deadliest in Iraq since 2003, when US-led forces ousted Saddam Hussein.

The Karrada retail hub was packed with shoppers preparing for Eid al-Fitr, a holiday marking the end of the holy month of Ramadan. The Islamic State (IS) claimed responsibility for the attack.

The bombing sparked public outrage, and citizens attacked the convoy of Prime Minister Haider al-Abadi, who visited the scene a few hours after the explosion to examine the impact of the bombing and check on the victims. Abadi pronounced three days of mourning and said he understood the citizens’ distress.

The Karrada bombing had political repercussions. Iraqi Interior Minister Mohammed al-Ghabban resigned July 5 due to disorganization and "lack of coordination" among the security forces. Abadi accepted the resignation, according to information leaked from the Cabinet. Several security officials in Karrada were also dismissed in an attempt to calm the citizens who were demanding accountability from officials, including the chief of the Karrada regiment, who was referred for investigation in the wake of the blast.

Abadi also ordered that pending execution verdicts for convicts be carried out to appease the angry public. The day after the blast, five convicts were executed. The Iraqi people constantly criticize the government for delaying the execution of terrorism convicts, many of whom have escaped and are currently counted among the prominent leaders of IS.

Amid escalated demands for improved security, former Prime Minister Nouri al-Maliki expressed his desire to return to the position in a BBC interview July 3. He accused the incumbent government of being deficient and said the protests that have been ongoing since last summer to demand reform are wrecking the political process and will deteriorate the situation in Iraq.

In a related development, many members of the Popular Mobilization Units, which includes Shiite militias, demanded the Iraqi government turn over the security investigation in Baghdad to them — a move some observers say is designed to increase the organization's power politically and socially. The demand was widely welcomed, as the organization enjoys broad public support in Shiite provinces and Baghdad, thanks to its continual achievements in fighting IS.

Several Iraqi activists launched a petition asking the United Nations to conduct an international investigation into the Karrada bombing. More than 77,000 people have signed the petition so far. The hashtag #international_investigation_karada was also created on Facebook and Twitter for that purpose. The people want an international investigation because of suspicions raised by the nature of the attack, the extent of its damage and the kinds of materials used. Questions are being raised about how the suicide bomber breached the area's supposedly strong security. Also, officials said the resulting fire spread in an exceptionally quick way and charred victims' bodies.

He acknowledged that one significant lapse in security stemmed from the use of ineffective sonar devices, known as ADE-651, designed to detect explosives. These sonar devices were proved useless years ago and were the subject of a scandal. The British government suspended the work of the company that manufactured them — ATSC — on the grounds of fraud and referred its owner, Jim McCormick, for criminal investigation in 2010.

Yet this failed bomb detection system, which Iraq had purchased for $85 million, was used at all checkpoints in Iraq and was sometimes the only means of inspection. Several papers were published saying that the deal to buy the devices was fraudulent and corrupt.

After the explosion, Abadi immediately ordered that the device no longer be used, but most checkpoints in the capital are still using it, under the excuse that they did not receive an official notice to remove it. Moreover, withdrawing the device is not enough, as there is no effective alternative. There are currently only suggestions for alternatives, such as installing cameras and deploying dogs, which were proposed July 4 by the parliament’s Defense and Security Committee.

Abadi ordered the Ministry of Interior on July 3 to expedite the installation of scanners to inspect cars at all the entrances to Baghdad and its districts. But to legally implement these suggestions, they should be voted on, which takes time. Then, the right equipment should be bought and staff should undergo training. In addition, the problem of corruption and administrative slackening in Iraq does not help — which means the idea that an alternative will be implemented in the near future is far-fetched.​