The Islamic State has developed a new way to conduct its terror operations, while the Iraqi government is unable to prevent security breaches. 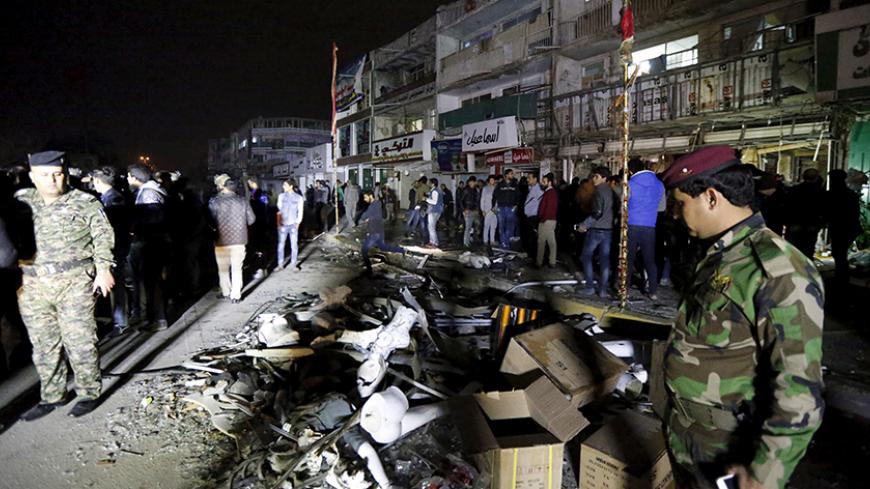 Iraq needs to up its game if it hopes to keep up — or rather, catch up — with ever-evolving terrorist groups such as the Islamic State (IS).

The Iraqi government is unable to secure its cities, including the capital, Baghdad, even in Shiite areas that offer no support or accommodations to IS. In fact, terrorist acts are often carried out in the heart of Baghdad's Shiite areas.

In July, a suicide car bombing targeted a security checkpoint at the entrance of the city's Shiite majority neighborhood of Kadhimiya. Most recently, a Jan. 11 operation included a suicide car bombing, shooting and hostage taking in the crowded al-Zahra shopping center in the Shiite-majority area of New Baghdad; 32 people were killed by the bomber and accompanying gunmen.

IS officially claimed responsibility for the Jan. 11 attack. “Four soldiers of the caliphate carried out a suicide fighting operation amid a crowd of apostate polytheists in central Baghdad [and] caused a large death toll," IS said on its social media pages.

This raises questions about how the terrorists managed to reach these areas despite the many police checkpoints and internal security forces. Security forces may have found some answers after arresting a group of terrorists Jan. 4, with officials saying the group was responsible for a series of bombings in Baghdad, the most recent one being a Nov. 8 attack in Sadr City.

The terrorists actually spoke on Iraqi Al-Sumaria TV about the various means IS uses to carry out terrorist acts in Shiite areas.

IS pays individuals to help it and pressures others by threatening their family members or taking them hostage in IS-controlled areas. IS also takes advantage of those who have joined the organization through religious calls made by imams and other preachers at mosques affiliated with IS.

The group of terrorists further explained that any terrorist act takes place with collaboration among groups specialized in each part of the operation. One group plans how to deliver explosive devices to a targeted area while another group executes the delivery. The process is divided into different stages that include dismantling and reconstructing the explosive devices. Then another group accompanies the suicide bomber to the attack site.

The Jan. 11 attack was an example of a new multipronged approach IS is using called “inghimasiya,” Arabic for suicide fighting attacks. An earlier example was the Nov. 4 IS attack on a police station in al-Dibs, in eastern Kirkuk, which killed six police officers. A distinction is made between the term “inghimasi” (suicide fighter) and "istishhadi” (martyr), which is traditionally used by jihadi groups.

The suicide fighter carries bombs and guns, and is accompanied by other fighters. Together, they attack the target, kill victims or take hostages. The suicide fighter usually blows himself up in the middle of the operation, paving the way for his companions to implement the next stages of the attack, such as taking hostages, stealing documents or killing people at the scene — and sometimes withdrawing.

The suicide fighter sometimes holds off on blowing himself up to allow his companions to cause the greatest damage possible, provide a cover for their withdrawal and remove evidence of the perpetrators’ identities. Such suicide fighting attacks included the ones in New Baghdad in early 2016 and Sadr City in late 2015.

Terrorist attacks aren't always religiously motivated; other reasons include financial motives or political revenge, with operations carried out in both Shiite and Sunni areas.

In addition, the rampant corruption in government agencies, including military and security establishments, contributes to the access of terrorists to areas that are far away from their area of ​​influence. They are able to do so by bribing security officers at checkpoints. The head of the Citizen Alliance, Baqir Jabr al-Zubeidi, said in 2013 that “the security establishment's corruption is behind the bombings.”

The Iraqi security apparatus has not made any significant progress in the way it deals with security breaches. Security forces still use old tools and devices, such as inefficient or ineffective bomb detectors and surveillance cameras, while terrorist groups have developed and diversified the way they implement terrorist attacks.

The most prominent example of outdated Iraqi equipment is the sonar handling system (ADE 651 bomb detection device), which turned out to be completely fraudulent. Six years ago, it was proved that the device does not detect bombs or explosives at all. The company's British owner was convicted of fraud by a UK court in October 2014 and sentenced to 10 years in prison. Yet, the device is still being used at various checkpoints in Iraq.

The ongoing "improvements" in the way terrorists carry out their attacks require that the Iraqi government take firmer and tougher preventive measures.

The government needs to update its security plans to protect the cities, based on international security standards and with the help of international, specialized security companies, as is the case in many other countries. Egypt, for example has turned to an international company to help secure its airports.

Otherwise, the terrorist bombings will not be prevented at the heart of government-controlled areas, including the Shiite-majority areas.​