As the Islamic State is attacked from all sides in Mosul, it is making a last ditch effort to disrupt military operations by carrying out attacks in Iraq's predominately Shiite province of Najaf. 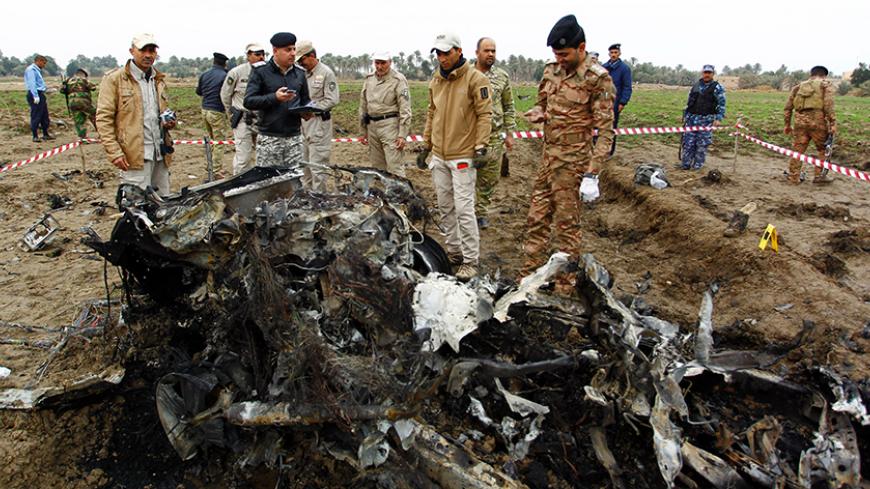 Iraqi security forces stand next to a burned car at the site of an attack on a police checkpoint, near the town of Qadisiyah, Iraq, Jan. 1, 2017. - HAIDAR HAMDANI/AFP/Getty Images

BAGHDAD — Following the recent terrorist attacks in the predominately Shiite province of Najaf, Governor of Najaf Luay al-Yassiri and the deputy chief of the Popular Mobilization Units (PMU), Abu Mahdi al-Muhandis, announced Jan. 15 the formation of two regiments of the PMU to control the desert of Najaf and protect the holy city of Najaf from Islamic State (IS) terrorists. Yassiri also said the province is to build a 50-kilometer (31-mile) tunnel on the western side of the city to protect it from terrorists.

After its major losses in Mosul, IS has been seeking to move its operations to the predominantly Shiite center and southern Iraq. To IS, Shiites are its bitter enemy. On Jan. 1, IS carried out an attack in Najaf, 160 kilometers (100 miles) south of Baghdad, which is home to many Shiite authorities. The militant group claimed responsibility for the attack, stressing that it was carried out by five suicide bombers. On Jan. 8, the security apparatus seized a car bomb in the Shiite-majority governorate of Wasit.

In another attempt on Jan. 2, the PMU clashed with IS fighters in the area of the Nukhayb desert, adjacent to the Shiite city of Karbala, after militants had tried to infiltrate the city and Najaf. This prompted Karbala Governor Akil al-Turaihi to start looking for military options to strengthen the security situation.

IS attacks in the Shiite south are seen as a qualitative development in the organization’s activity, as these areas have been witnessing relative calm in the past few years. Today, IS is trying to establish itself by attempting to breach security in the center and the south, away from its strongholds in the north and the west of the country.

On Dec. 11, the local government in Babil declared a state of emergency after its security forces were attacked in the area of Jurf al-Nasr.

The tight and expensive security measures to protect the central and southern cities, namely Karbala and Najaf, did not prevent IS from breaching security, causing human and material damage at the level of security forces and civilians.

On Nov. 25, IS claimed responsibility for the attack carried out by a suicide bomber known as Abu Fahd, who blew up a water tank at a gas station on the Diwaniyah-Babil road in the south, killing roughly 200 Shiite Iraqis and pilgrims from Iran and Bahrain. IS announced in a statement that the Shiite cities were attacked to take vengeance for what happened in Mosul, where Iraqi forces, with the support of the US-led coalition, have conducted a large military operation since Oct. 16.

IS also gave the attack a religious and historical dimension, by stressing that “the battle of Mosul is in revenge for the killing of Husayn [in reference to the Shiites], who was killed in the battle of Karbala.” Thus, IS is accusing the Shiites themselves of killing their third Imam Husayn ibn Ali.

Although it is a clear challenge imposed by IS, member of the parliamentary Security and Defense Committee Abdul Aziz Hassan told Al-Monitor that it is nothing but “a reaction to its losses in Mosul, in an attempt to prompt sleeper cells to carry out terrorist operations in order to boost the morale of its fighters.”

He said, “Failure awaits IS, particularly since the security plans are thwarting its attempts. The success of some of its operations is not a sign that its presence is expanding in the central and southern parts. What happened is a mere security breach that can be addressed.”

Yet IS carried out an attack in southern Iraq even prior to the Mosul operations, specifically on April 4 when a suicide bombing targeted a PMU gathering at Umm Oneij, which links Dhi Qar to Basra, killing four and wounding dozens.

In the face of the latest developments, Sadiq al-Labban, a member of parliament for the Basra governorate, told Al-Monitor, “IS has sought for long to carry out terrorist attacks in the Shiite holy shrines such as Najaf and Karbala as part of religious hatred of this Muslim sect.”

He added, “IS seeks to instigate a strife between Shiites and Sunnis to ignite a yearslong sectarian war that would enable the organization to remain in Iraq.”

Labban underestimated the attack in Najaf, stressing that “the attack is a simple breach that did not achieve the objectives of IS. It points at its poor capabilities and weak sleeper cells in the central and southern parts that are under the control of the PMU and Joint Operations Command in charge of securing border governorates, especially Karbala and Najaf.”

He added, “The residents of the central and southern parts are a reason behind the failure of IS. They are fighting IS alongside security forces, particularly since IS considers them infidels to Islam and allows their murder.”

Although Labban underestimates IS capacity to carry out attacks in the central and southern parts of the country, the Central Criminal Court in Baghdad that handles terrorism and organized crime-related offenses revealed Aug. 31 that the organization is turning intertwining orchards and farms in the Baghdad Belts adjacent to the central and southern cities into bases for its members, especially suicide bombers, and training facilities for its fighters.

According to Qassim Mouwazin, a political analyst and writer for Al-Sabah newspaper, IS' most important motives are to carry out military operations in the central and southern cities of Iraq. “IS seeks to establish its presence there and to divert attention from the defeats it suffered in Mosul and in Fallujah before that. The organization is likely to attempt to carry out other attacks on the PMU headquarters in order to boost the morale of its fighters,” Mouwazin told Al-Monitor.

IS has carried out more than 1,100 suicide bombing attacks in Syria and Iraq in 2016. It is likely that the extremist organization will try to target new areas, as some of the peripheries of Baghdad are serving as a launchpad for attacks on Iraq’s central and southern cities.